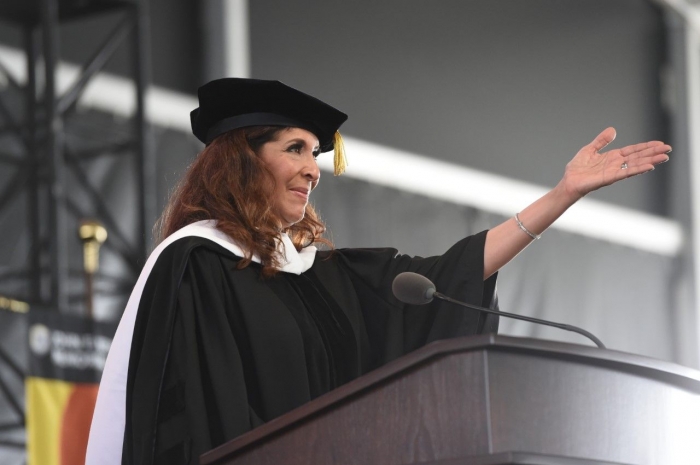 Devine, who celebrated 30 years at KTTV last fall, anchors the station’s 5, 6 and 10 p.m. weekday newscasts. Her weekly news segment “Wednesday’s Child,” a partnership with the Los Angeles County Department of Children and Family Services, has helped more than 500 children find adoptive homes since it debuted in 1995.

Cal State LA and the California State University Board of Trustees conferred an honorary Doctor of Humane Letters to Devine during an afternoon Commencement ceremony for the Rongxiang Xu College of Health and Human Services on July 26. Douglas Faigin, a trustee of the CSU, read the degree citation.

“As one of the longest-serving news anchors on any major Los Angeles television station, Christine Devine is a unique individual who has been instrumental in making Los Angeles one of the world’s great modern cities,” Faigin said.

A fellow longtime journalist and president of City News Service Inc., Faigin noted that Devine “has provided the people of Los Angeles the information they need for successful personal lives, success in civic engagement and success in building community. In addition, her activities on behalf of children have changed numerous lives for the better.”

Cal State LA President William A. Covino conferred the degree on behalf of Cal State LA and the CSU before turning the lectern over to Devine to speak. In her remarks, as Covino did in his, Devine addressed the challenges that the graduates have had to overcome in the last year-plus. 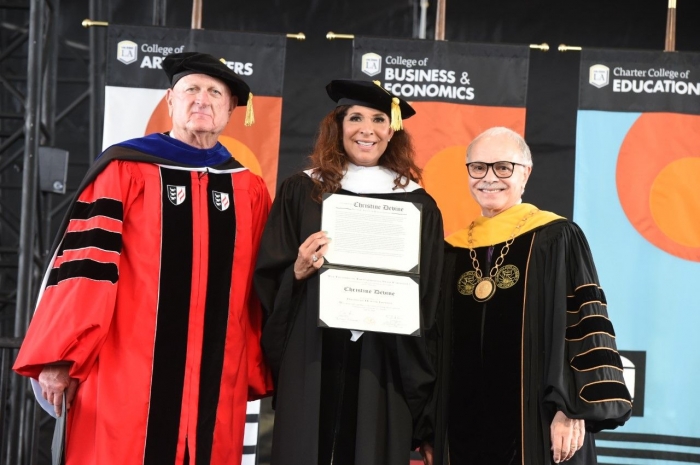 “You have persevered through unprecedented politics, a global pandemic, protests in our streets,” Devine said. “It is the story of your graduation years, and I say ‘years’ because this is the Class of 2020. We were supposed to do this last year. The coronavirus may have canceled last year’s Commencement ceremony—but not your accomplishment. You will forever tell the story of how you walked in graduation, in the midst of an ever-changing pandemic, with our masks still in hand.”

After acknowledging the heartbreak that many have suffered, including the loss of loved ones, and calling for a moment of silence in their memory, Devine continued: “The beauty of the Cal State LA student is that you know how hard you had to work to get here. This is a campus that, as you look around, you can tell welcomes diversity. It’s a place that says yes, we want you exactly as you are.”

Through the “Wednesday’s Child“ segment, Devine and KTTV colleagues have showcased the stories of children in foster care who seek adoptive families. She noted her personal connection to the cause through her mother and father, who were foster and adoptive parents. The greatest contribution of “Wednesday’s Child,” Devine said in her Commencement remarks, “is to take away the stigma of children in the so-called system … to acknowledge their story and their self-worth, to allow them to advocate for themselves.”

Another of her objectives, Devine said, is to “shine the light on the social worker.” She introduced Cal State LA professor William Wong, the longtime coordinator, on behalf of the Department of Children and Family Services, with whom she collaborates on “Wednesday’s Child.”

Devine has won wide acclaim for her work as a journalist. She has been awarded 16 Emmys by the Television Academy and in 2011 received its Los Angeles Area Governors Award. In 2018, the Radio and Television News Association of Southern California honored Devine with a lifetime achievement award.

For her work with foster children, Devine was honored as an “Angel in Adoption” by the U.S. Congressional Coalition on Adoption Institute and was named by Los Angeles magazine as one of 2012’s “50 Women Changing LA.”

Devine is a graduate of Arizona State University and serves her alma mater as a member of its Board of Trustees. In 2001, she was inducted into the Hall of Fame of the university’s Walter Cronkite School of Journalism and Mass Communication, where she has funded a scholarship. 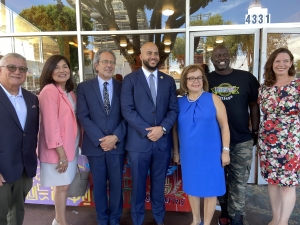 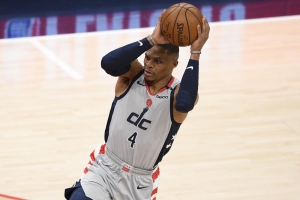 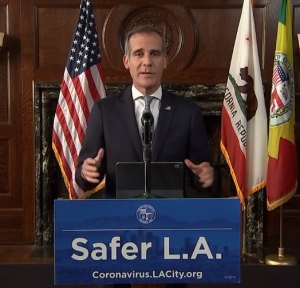