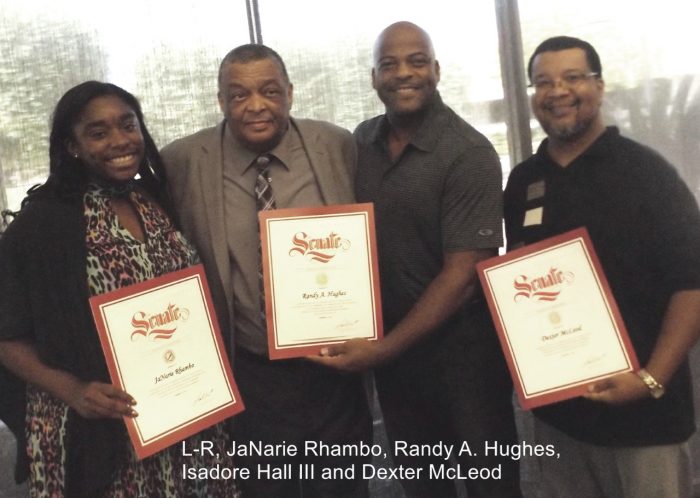 The Friends and Neighbors Community Club’s (FNCC) thirteenth annual luncheon was celebrated on Saturday September 3rd at the Carson Community Center in Carson, California. Hosted by FNCC president and founder Randy Hughes, the event is a time set apart to acknowledge community leaders and partnerships whose mission is to make a positive difference in the lives of others. The FNCC motto is “Neighbors coming together for a greater purpose.”

Honorees in the youth category were Cameron Ennols, JaNarie Rhambo and Eduardo Ovando. FNCC’s highest honor, “The Yellow Rose Award,” went to Dexter McLeod. City and State proclamations were awarded to Hughes and the honorees. Said Senator Hall, “I’m proud of the 13 years of FNCC service.” Stressing the importance of partnerships like FNCC, Hall also said, “Randy is a beacon of hope.”

Hawkins who has over 24 years of insurance experience with State Farm offered some valuable insight on the importance of being adequately insured and staying on top of policies to insure they meet current needs.

Chief Hellmond, a 28-year veteran of the Sheriff’s Department, praised President Obama’s My Brother’s Keeper program. He said last year they offered paid internship and recruited 60 boys and girls of color (of which only six dropped out), and urged the kids to get into public safety.

Although Reverend Brown did not speak, his wife Pauline (also a minister) gave a rousing speech about the history of local black communities and the importance of keeping the history alive by communicating it to younger generations. She also announced that a celebration of Carver Manor – land parcels bounded from the eastside of Avalon Blvd. to McKinley Avenue; and northbound from 135th to El Segundo Blvd. – will take place on September 17th at Enterprise Park. The event will be spearheaded by Robert Lee Johnson (also a member of the Compton 125 Historical Society). Johnson (who sat at my table) is a wealth of historical information. For additional information on Carver Manor, please visit the FNCC website’s “About” page at www.fnccla.com.

Reverend John Miller did a wonderful job as the Master of Ceremony. Vocalist Nicole Dodds provided entertainment with excellent renditions of “God Is Awesome,” and “Wind Beneath My Wings.”

FNCC would like to thank all who contributed to making the event a success – particularly the catering staff at the community center.