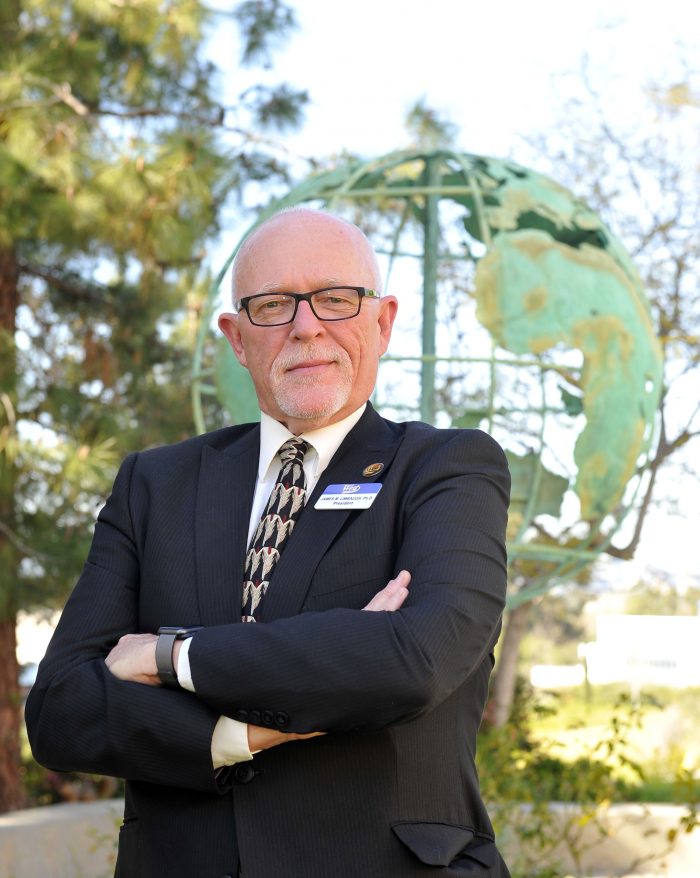 “When the opportunity at West Los Angeles College came up, I thought okay I need to try this,” said Dr. Limbaugh.  “Although I have to be honest with you, I’m a little boy from Texas and there is the myth about Los Angeles and I thought, ‘I am not quite sure if I want to do this.’

“But I got here and I got to the interview and I was sold by the commitment and the enthusiasm, and the vitality that the people from the campus have. And I haven’t been proven wrong in the last three and a half months. Folks there are so committed to doing what’s right for our students. They are so committed to students for whom West L.A. may be their only opportunity to make a change in their lives and they take that very seriously. So, I am really glad to be a part of that.”

Born and raised in East Texas, Dr. Limbaugh received his master’s degree from Texas A&M University and his doctorate from the University of Maryland. His first professional job was at the University of Nebraska-Kearney, where he served as Assistant Director of the Memorial Student Union.

Dr. Limbaugh spent two decades in Maryland, working at Frostburg State University, where he served as the Associate Vice President for institutional effectiveness.

He served as chancellor for Montana State University having previously worked at Angelo State University in San Angelo, Texas as interim provost and vice president for academic and student affairs.

While working in Montana, Dr. Limbaugh discovered the importance of a two-year education because Montana offers both associate and bachelor degree programs.

“A two-year education is much more immediate,” said Limbaugh. “You have specific things you have got to do to help prepare students to either move on to [a four year] college, or to contribute in a meaningful fashion to the work force.”

As interim president at Oxnard College, Limbaugh fell in love with California because of its masterplan for education. This led him to apply for the job at West Los Angeles College.

Dr. Limbaugh wants the community to know that he understands Los Angeles is a multicultural hub and with a variety of people and situations. He understands his student population represents that diversity. 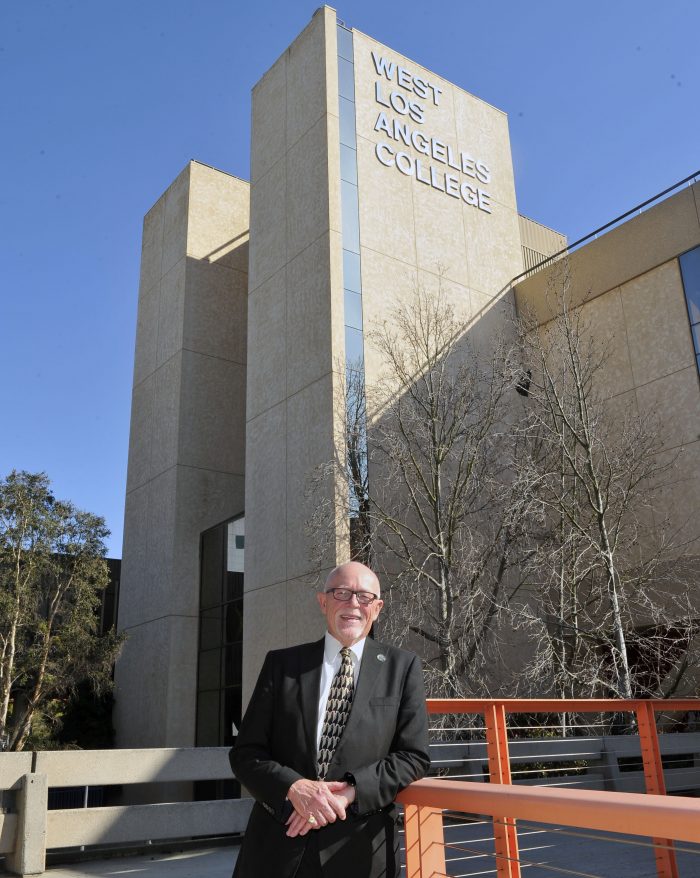 “We have students that are balancing work and home, and homelessness and being a foster child, and children,” said Limbaugh. He shared he wants students to know that West L.A. College faculty and staff appreciate them for who they are and the struggles they have endured. If a student feels no one cares, he understands they will turn around and leave the campus.

“That’s the thing I want people to remember, we all carry the future of the students and every engagement we have with them and that’s why I think a community college has to go the extra mile in terms of being compassionate, understanding and putting themselves in the shoes of their students,” said Limbaugh.

Dr. Limbaugh learned the importance of hard work during his days as a college student, where he worked as a housekeeper on campus, while putting himself through night school.

“I learned from the housekeepers that I worked with, who started every morning by saying, ‘We got to make the buildings clean because our kids can study better in clean environments.’ And what I realized was that everybody can contribute in a meaningful fashion in creating an environment that supports our students,” said Limbaugh.

At the University of Maryland, students voted on the most significant and influential person on campus, who just happened to be a housekeeper on a 6th floor residence hall.  “She knew everybody, she took care of them, she counseled them and that was very meaningful,” said Limbaugh. “One of the things that I always try to remember is that you never know if you are going to be the person who will make a student go or stay.

“I enjoy engaging with students and walking into the classroom, I enjoy the outreach aspect of it… I feel lucky every day that I have this opportunity.”

As for his goals as President of West Los Angeles College, Dr. Limbaugh shared how he wants to grow the institution. He is a big believer in organizations identifying what they do and perform better than anyone else. 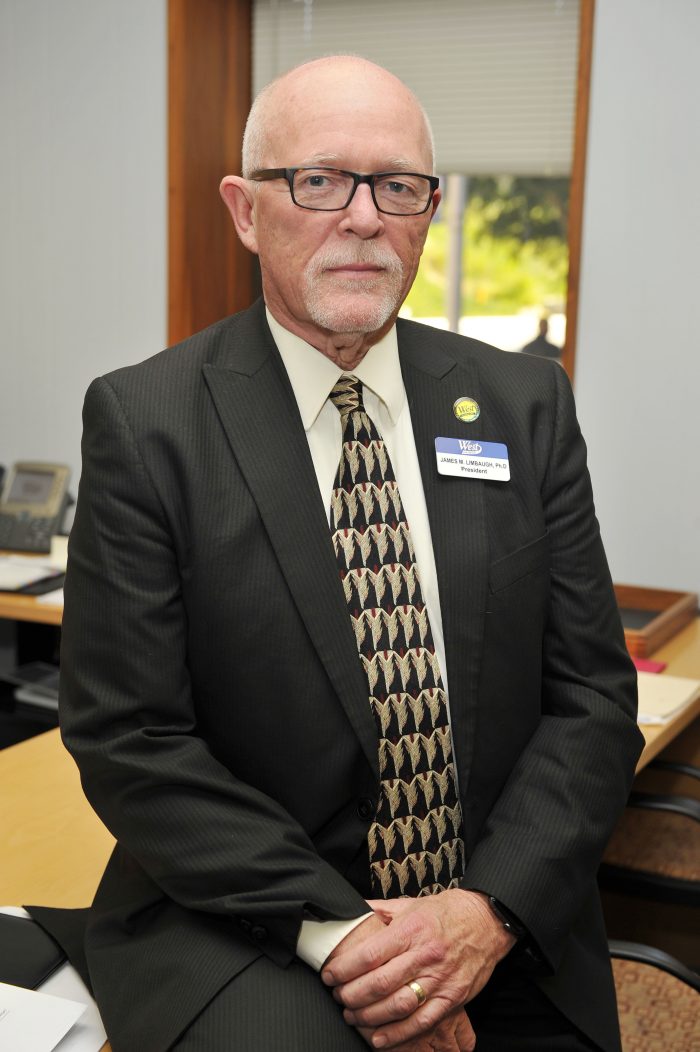 For example, West L.A. is known for several programs such as dental hygiene, aviation, film, child development, and administration of justice. Dr. Limbaugh has to make tough decisions on what programs will be developed or cut.

“We are beginning that process; we are having a series of campus-wide meetings in the spring and it is going to go over the next 18 months in order to have the necessary conversations.” said Limbaugh.

As for the African American student body, Dr. Limbaugh is aware of the decreasing enrollment at the college. He believes his most important role, in terms of outreach, is to let students know he has a passionate interest in their concerns.

“I’m White. I am a White guy,” said Limbaugh.  “I am aware of some issues of perception of white privilege; that I got to a certain place where others couldn’t. I understand, I am a product of my time period. But, I also know that I made a commitment as an educator to educate every student who came to me. I don’t care if you are plaid or polka dot. Ethnicity is irrelevant because every student has that spark in him or her and my responsibility is to help students get pass issues of race and understand that education is a universal need. My job is to make sure all of them get that.

“I think the biggest challenge that I have in dealing with the African American community, is building a legitimate trust so that skin color becomes secondary. I came out of the South. I understand about how race relations break down and I understand how they can be a force of extraordinary good.  When you look at what’s happening on a daily basis in our world right now, we have to look at ourselves as unified, then and all those issues become secondary. I have to help prepare a generation of students who can help lead in a world that’s going to be forever changed by what’s going on now.”

Dr. Limbaugh gets his passion and outlook on life from his middle-class upbringing. His father was a traveling salesman and his mother was a homemaker. His parents were good people who didn’t quite understand why he wanted to attend college but they supported him.

Now he thanks his wife for giving the same unwavering support. “Many times, the spouse of a president is a very difficult role,” said Limbaugh. “You are partially ceremonial and partially there for political reasons. She has done a great job through three presidencies. Whenever you are president, you have to hold your own counsel many times. Trisha has been my friend, my confident, my kick-in-the-butt, my strong arm and my support whenever I needed it. She is the unsung hero of all of this; I wouldn’t be here without her and I say that very seriously.”

When asked what type of legacy he would like to leave for West Los Angeles College, Dr. Limbaugh shared he would like to have the school in a place where it knows the direction its going, and it is proud of that and knows what the school stands for.

As for his personal legacy, Dr. Limbaugh shared that he wants to be remembered for doing his best for his students and maintaining the highest level of integrity.

“That is very important to me,” said Limbaugh. “People are not going to always like the decisions I make, but I just want them to know that I always make my decisions with the highest level of integrity I can muster because people around me don’t deserve anything less.”