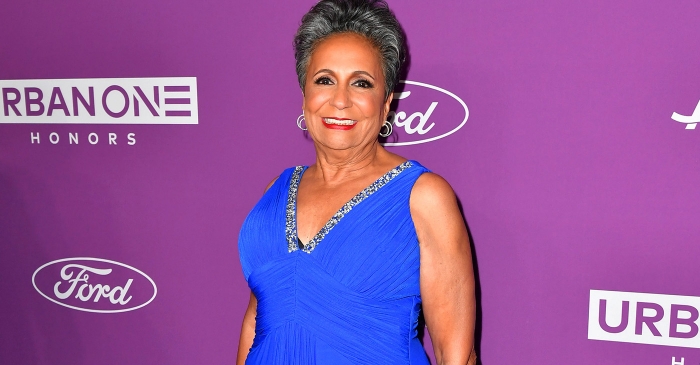 Inside the illuminated MGM National Harbor towering over the Potomac River, the 3,000-seat theater slowly fills with African Americans donned in tuxedos and gowns as Hollywood’s and New York’s top entertainers mix with some of Washington, D.C.’s bourgeoisie including politicians and business leaders. All have gathered to celebrate the 40th anniversary of Urban One Inc., the nation’s largest distributor of news and entertainment aimed solely at Black consumers, which also includes the largest African American owned TV network.

The media company that for decades was known as Radio One Inc. for its stable of radio stations across the country, changed its name in 2017 to Urban One, a new name that reflects, its owners believe, its channeled mission of providing media content to urban audiences via all forms of media through its divisions including radio, television programming with its TV One cable network and now the Internet.

Still at the helm of Urban One is the legendary woman with the mic, camera and now computer keyboard is the company’s founder and chairwoman, Cathy Hughes. On this night, the 72-year-old energetic and spirited Hughes is also serving as co-host for the 40th anniversary Urban One Honors awards show with comedian Chris Tucker, which is scheduled to air on Hughes’s TV One network Jan. 20. 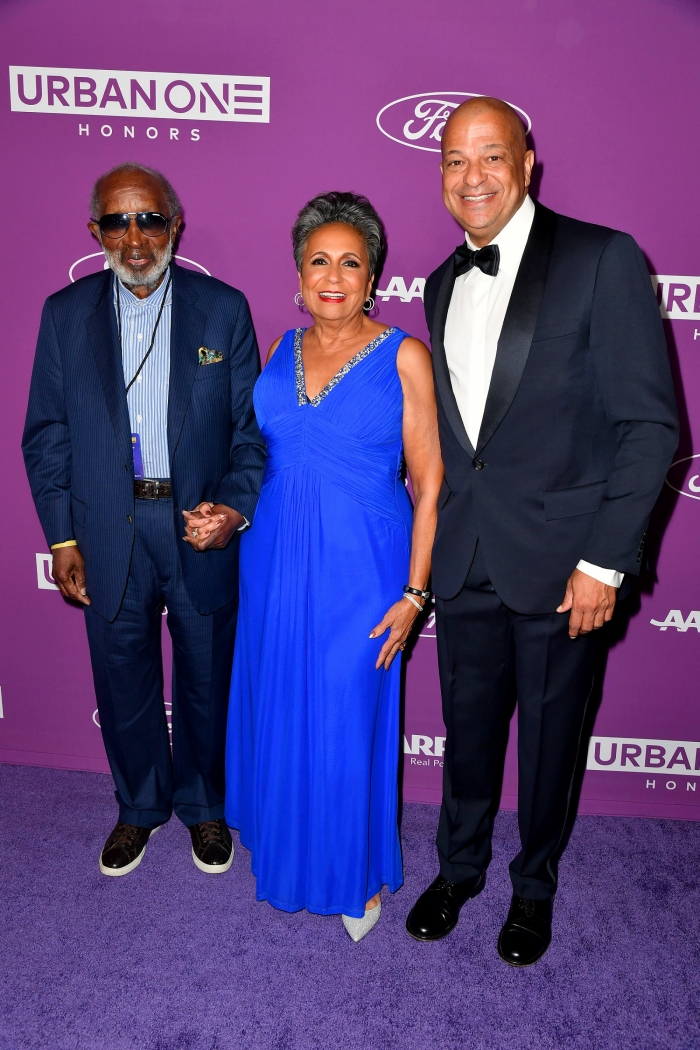 The show, however, is already running late before it even began. Taping was supposed to begin 20 minutes or so ago. But people are still slowly filling their seats. Then, to a round of staccato applause and without an introduction, Hughes, with her broad smile, walked onto the stage. She apologized for the late start. The staffing at the entrances of the MGM, she said, have been slow in allowing audience members through the doors. “But I’ll take care of this,” she said while putting a finger in the air.

Hughes disappears backstage. And within 10 minutes, as if a dam burst, audience members began rushing into the theater to their seats. Minutes later, the orchestra begins playing and Hughes and Tucker walk on stage arm-in-arm to begin the two-hour show.

No one messes with Cathy Hughes, especially when she is their boss. That’s right, in addition to the various entertainment companies, Urban One also owns nearly seven percent of the $1.4 billion, MGM casino, hotel and resort, a purchase the company made when the resort opened three years ago. 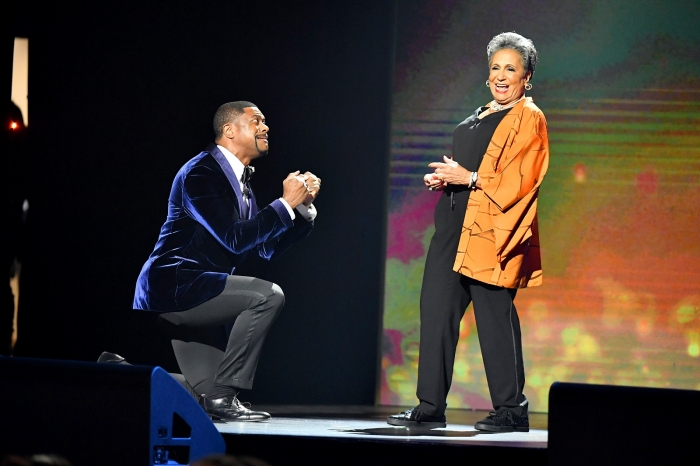 As the nation celebrates the birthday of the Rev. Dr. Martin Luther King Jr. this month, those who knew King well, say Hughes and Urban One are the epitome of King’s dream. Dr. Benjamin Chavis, who worked as a youth leader for King in the 1960s, said Hughes was able to break through the historically, White, male-controlled world of media ownership and create her own media company that she uses to not only to reach millions of people around the world to ensure that the voices of African Americans continue to be shared and visible.

“Urban One continues to fulfill Dr. King’s dream,” Chavis said. “The best way to celebrate Black history is to make more history. Cathy Hughes continues to make Black history.” Chavis is now head of the National Newspaper Publishers Association, made up of more than 200 Black-owned newspapers across the country.

The Hughes media story is well known. She began her career in 1969 at an AM radio station in her native Omaha, but left for Washington, D.C. when she was offered a job as a lecturer at Howard University. In 1973, Hughes was named general sales manager of WHUR, Howard’s FM radio station. Two years later, Hughes was promoted to general manager. There she created the late night, slow-jam formatted staple called “The Quiet Storm” a signature sound that expanded to radio stations around the country. In that short time, Hughes had taken annual revenues at the station from $250,000 to more than $3.5 million. 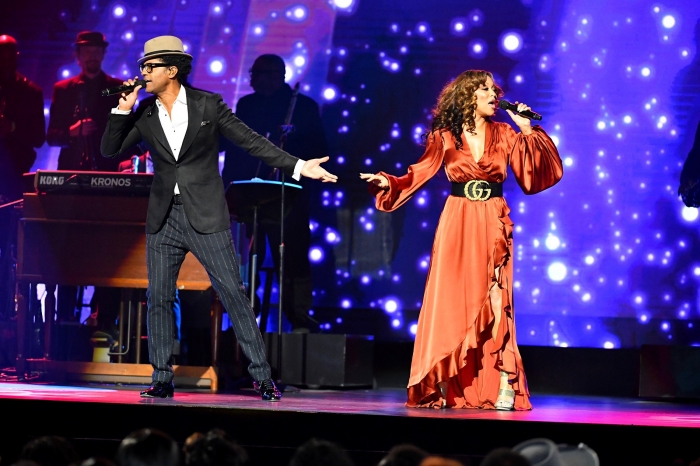 In 1979, Hughes and then-husband, Dewey Hughes, sought financing to purchase their own radio station and were rejected by 32 banks until 1980 when they secured lending to buy WOL-AM, a tiny Washington, D.C. station located in Northeast Washington. That first station led to the acquisitions of dozens of radio stations around the country. Then in 2004, with her son Alfred C. Liggins III, a Wharton School of Business MBA graduate, as chief executive officer his mother’s company, Radio One branched into television by creating TV One, a cable network reaching more than 40 million African American TV households.

In 2017, TV One changed its name to Urban One after it acquired a collection of Internet media websites, now known as iOne Digital, that focus on news, sports and entertainment stories about and for Black audiences.

Today, Urban One is worth, according to Wall Street estimates based on stock price of about $98 million. The company boasts of reaching 59 million households, 22 million listeners, 40 million video streams, 20 million unique Web visitors. It owns 57 broadcast stations in 15 urban markets, two cable networks and some 80 websites. Hughes works closely with her son who she credits with diversifying Urban One beyond radio and TV. 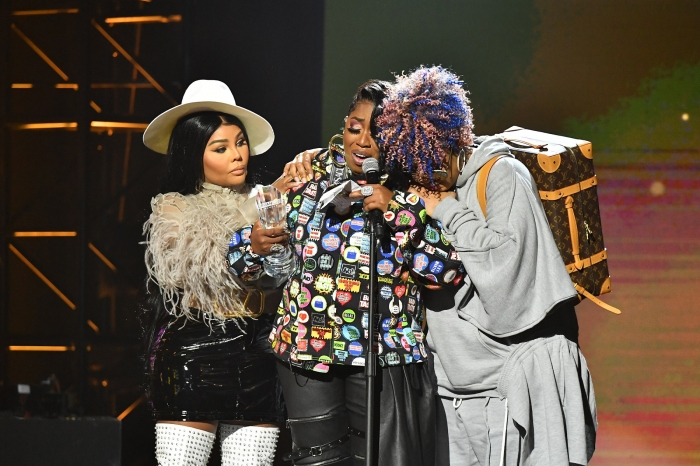 “This company has a commitment to serving our audience that is evidenced beyond just the mission of making money. It is to build an organization that represents the needs and interests of a community that for the majority of this country’s history, hasn’t had a voice to fight for it,” Liggins, 54, said recently.

Throughout the night, at the star-studded awards at the MGM, the influence that Hughes has garnered over the four decades was repeatedly echoed by those who took the stage.

Missy “Misdemeanor” Elliott surrounded on stage by other rap legends, Lil Kim and Da Brat, became emotional during her acceptance speech. She described Hughes as “bold, fierce, strong, innovative (and) a visionary.” Elliott said a “big” part of her success was due to Urban One. “We are all chosen, but there are certain people chosen to be a vessel,” Elliott said of Hughes. 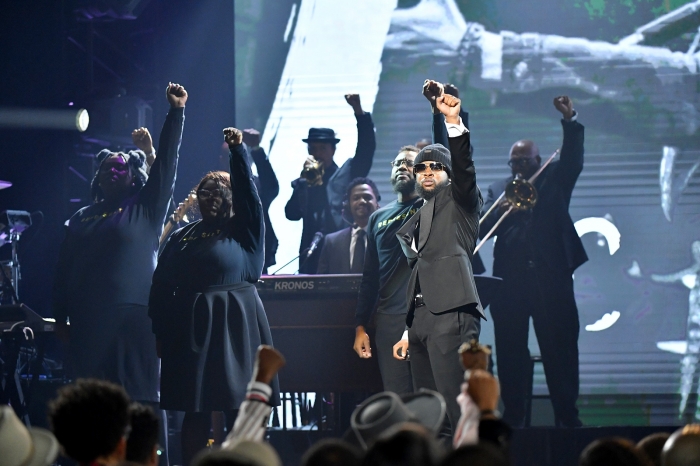 During his acceptance speech, actor and singer, Jamie Foxx spoke of when he and director and writer, Quentin Tarantino, were making the 2012 “Django Unchained,” they were concerned about the use of the N-word in the film and how audiences would receive the racist word. Foxx told the audience that he told Tarantino “the only person who could help them” ensure audiences would not be put off by the repeated use of the racist word would be Hughes. So, the two asked Hughes to come to the movie set so she could see the filming and hear the vision behind it. Foxx said they needed Hughes’s “blessing” knowing that her influence with audiences could ultimately make or break the film.

When he took the stage, Broadway, film and TV performer, Billy Porter described how being celebrated by a Black media company in front of a predominately Black audience, was unusual for out, gay Black entertainers. “As a Black, queer man in the world, this is such a special day for me. I never felt welcomed. Today in this space, for the first time in my life, I feel like I am a part of this community,” Porter said grabbing Hughes’s hand as she joined him on stage.

During his acceptance speech, Chance the Rapper described Hughes – or Miss H. as he calls her – as a “trailblazer” and a “maverick” who, he said, “built an entire industry, for us.” 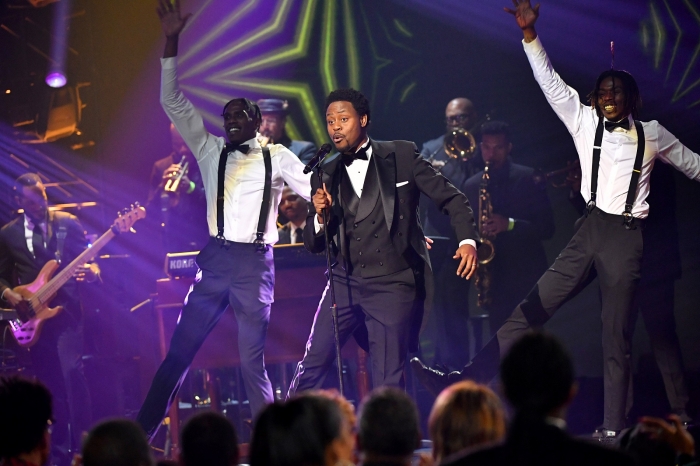 Hughes says she plans to continue to build and rebuild the media industry as the technology changes how Black households receive their information and entertainment.

“If the Black audience that we serve decides that they want to receive our messages via carrier pigeon, then I’m getting ready to go into the bird business. I don’t know what it will take in the future in order to reach that goal. That will depend on what advances occur in technology.”

Urban One’s plan, Hughes says, is to ensure the company will be at the center, the premiere go-to media outlet for Black households.

“It’s important for us to have Black-owned and controlled, particularly in the media, business ventures, nobody is going to tell our stories from our perspective, except us,” she said. “Nobody is going to do that for us. Why should they or would they? It’s our responsibility to do that.” 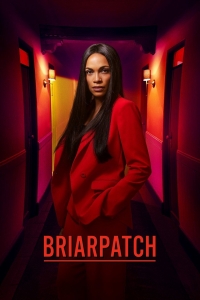 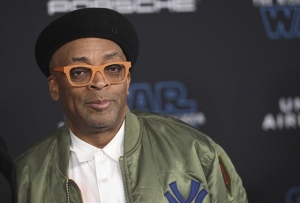 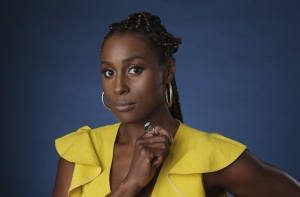 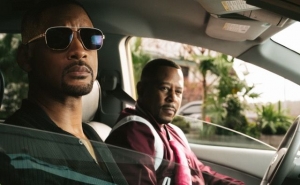