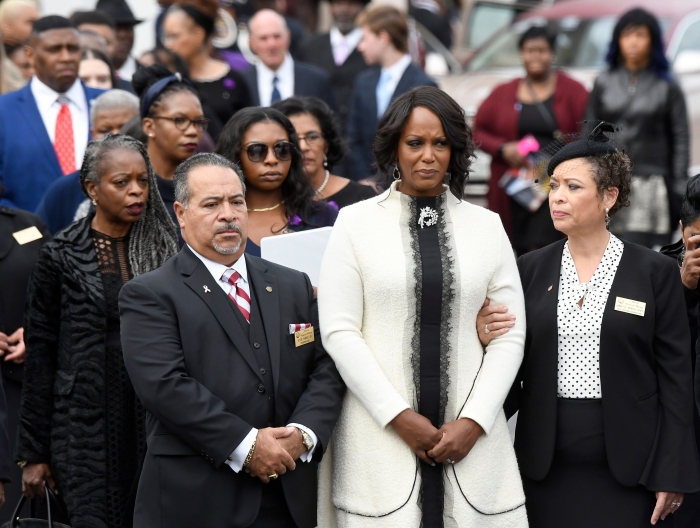 Rep. Elijah Cummings was eulogized as a leader with the fiery moral conviction of an Old Testament prophet Friday at a funeral that brought former presidents and ordinary people alike to the Baltimore church where the congressman worshipped for four decades.

“Our Elijah was a fierce champion of truth, justice and kindness in every part of his life,” said former Secretary of State Hillary Clinton, who took the stage at the New Psalmist Baptist Church to rousing applause. 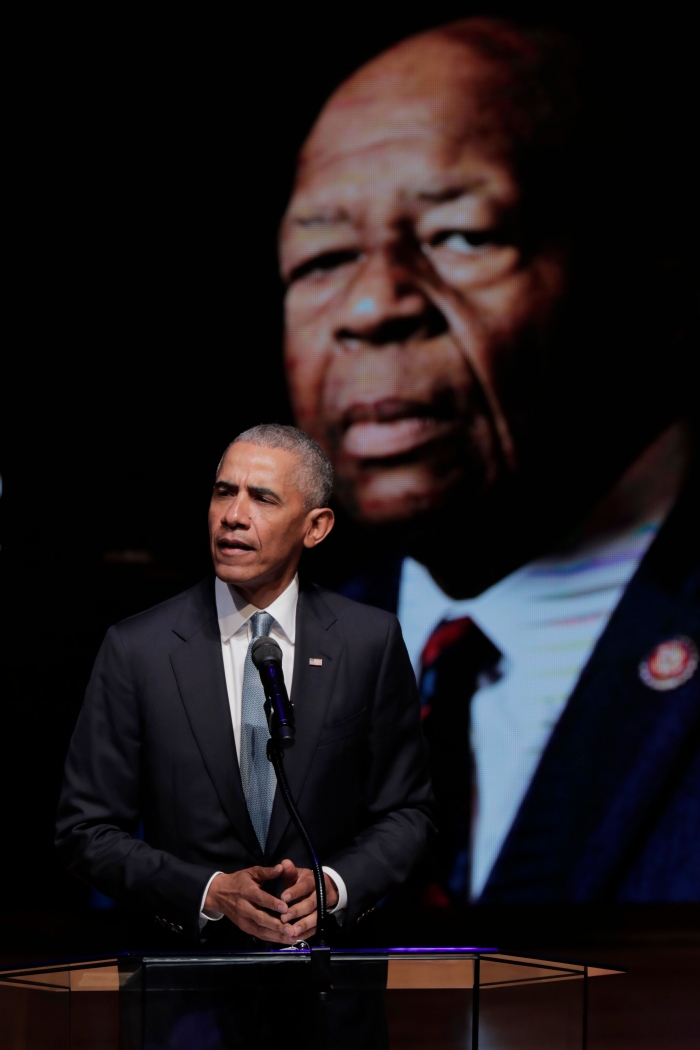 Cummings, a Black sharecropper’s son and civil rights leader who rose to power in Washington over two decades ago with his sonorous voice and powerful oratory, died of longstanding health problems Oct. 17 at age 68 while locked in political combat with President Donald Trump.

The Baltimore Democrat led multiple investigations of the president, who recently lashed out at Cummings’ district as a “disgusting, rat and rodent infested mess” where “no human being would want to live.”

The turmoil on Capitol Hill seemed close at hand during the service.

In what sounded like a reference to the impeachment inquiry against Trump, former President Bill Clinton told the crowd, “We all know now that, at least until certain things happen, his legacy is how ardently he honored his oath to protect and defend the Constitution of the United States.”

“He knew that without the Constitution, the laws that were passed under it, the rights that were guaranteed by it and the abuses it was designed to prevent … he would not have been in Congress,” Clinton said, “and so he said to himself, ‘I am certain every day, I will not let this promise be sullied.”’

House Speaker Nancy Pelosi, who as Democratic leader is overseeing the impeachment drive, took note in her eulogy of the bipartisan crowd at the church and said Cummings had the ability to work with both his fellow Democrats and with Republicans.

“Our Elijah always made a seat at the table for others,” she said.

Former President Barack Obama recalled Cummings’ humble beginnings, saying: “His life validates the things we tell ourselves about what’s possible in this country, not guaranteed, but possible.”

Cummings’s widow, Maya Rockeymoore Cummings, told the crowd that Trump’s recent jabs hurt her husband. Without mentioning the president by name, she said Cummings’ job became “infinitely more difficult in the last months of his life when he sustained personal attacks and attacks on his beloved city.” 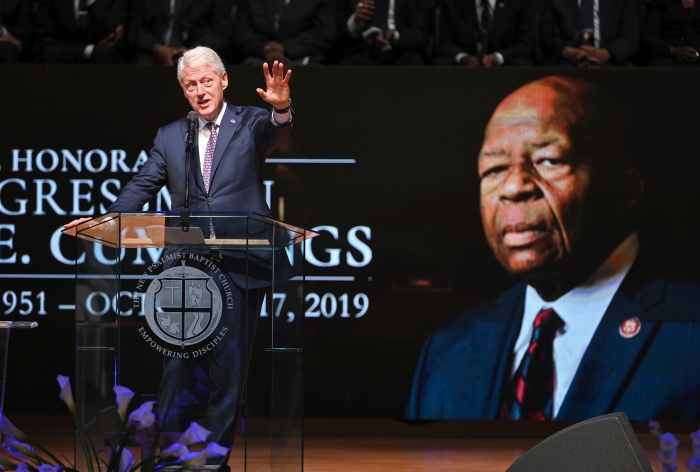 “While he carried himself with grace and dignity in all public forums, it hurt him,” she said.

Gospel and R&B singer BeBe Winans, a favorite of Cummings, performed “Stand” as mourners sang along, stood and raised their hands. Many wiped away tears. Democratic presidential candidate Sen. Elizabeth Warren recited the 23rd Psalm at the service.

“It is no coincidence _ is it? _ that Elijah Cummings shared a name with an Old Testament prophet,” Hillary Clinton told the crowd. “Like the prophet, our Elijah could call down fire from heaven. But he also prayed and worked for healing. He weathered storms and earthquakes but never lost his faith.”

Several hundred people had lined up outside before dawn, waiting for the doors to open so they could pay their final respects. Cummings’ casket arrived before daybreak and was placed, open, in front of the grand, 4,000-seat sanctuary.

“I felt like it was my civic duty, my responsibility to come and pay respects to a man who has done so much for Baltimore city, so much for the people, trying to keep us together,” said the Rev. Jacqueline Williams, 67, of Baltimore, as she waited in line. 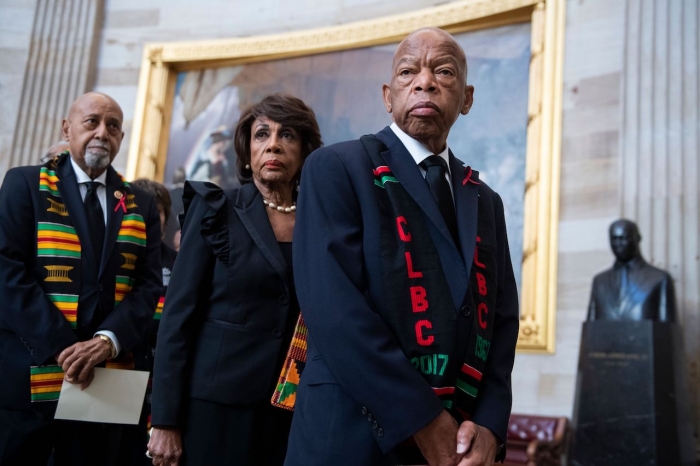 Among those waiting to get into the church was LaGreta Williams, 68, of New York, who met Cummings when they were college students in Baltimore in 1969. She said the teenage Cummings was a natural leader who aspired to become Maryland’s first Black governor. She recalled his deep roar of a laugh.

Williams said they remained friends for 50 years and often had lunch when she visited Baltimore.

“I think his legacy is that he was an honest person,” she said. “He wanted everyone to have an equal opportunity so that people could make better decisions for themselves, better choices.” 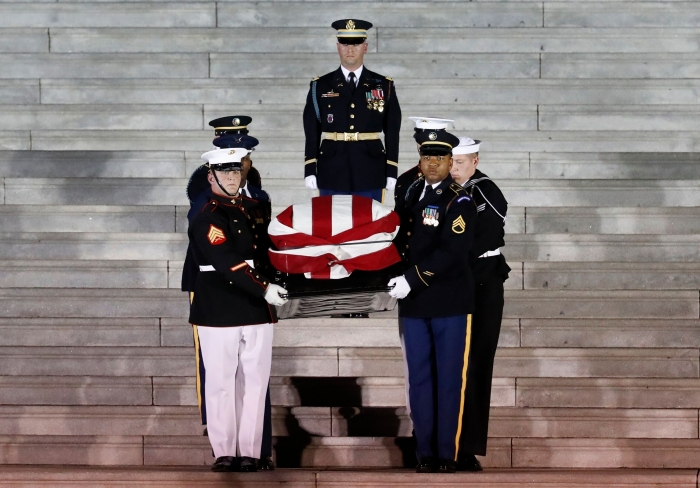 An honor guard takes the flag-draped casket of Rep. Elijah Cummings, D-Md., down stairs and into a hearse in front of the U.S. Capitol after lying in state in Washington, Thursday, Oct. 24, 2019. (AP Photo/Wilfredo Lee)

Bobby Trotter, a 67-year-old Baltimore resident who lives just outside Cummings’ district, recalled how the congressman helped quell tensions in the city after the rioting that erupted in 2015 over the death of Freddie Gray, a Black man who suffered a fatal spinal injury during a jolting ride in a police van.

Cummings “believed in helping people, particularly people that were downtrodden. He stood up. He spoke for them,” Trotter said.

A family spokeswoman said the burial would be private.