Earlier this month, Crenshaw High School football coach Robert Garrett won the 2017 Don Shula NFL High School Coach of the Year. The Don Shula award is given to a coach who shows outstanding leadership to players during games and for their lives.

“Every NFL team selects a winner, so that’s 32 winners and most of them—I’d say every single one of them—won their state championship,” said NFL director of youth and high school football Roman Oben. “But it’s really about what they stand for, what they live by, the character values.”

As the recipient of the award, the NFL gave Garrett $10,000 and the football team $15,000. The Los Angeles Chargers and Oben presented the checks to Garrett and the team at Crenshaw.

“This has been marvelous, it’s a great honor and they couldn’t have given it to a better person,” Garrett said during the presentation. “To be chosen as the Don Shula award winner, that says a lot for the people whose shoulders I’ve stood on for years.”

“I think it’s a very important statement on the part of the Chargers who are coming back to Los Angeles and adding value by way of acknowledging the contributions that the students make, that the coaches make,” Ridley-Thomas said.

Members of the football team also expressed their gratitude during the event.

“I just want to thank [Garrett] for continuing to always be a great father figure,” said senior linebacker Nygel Lewis. “As young men, we grow up; not a lot of us have that.” 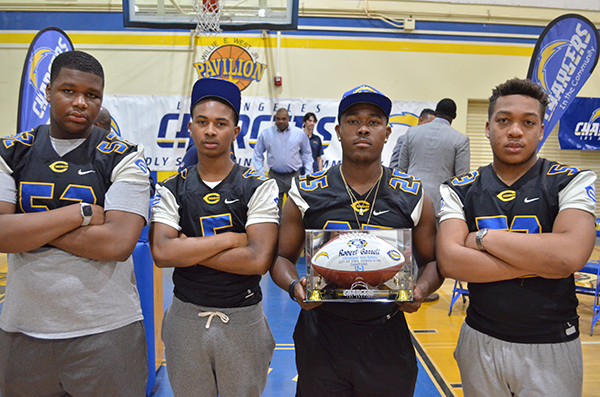 Crenshaw football players pose with commemorative football given to Garrett from the Chargers. (Amanda Scurlock/L.A. Sentinel)

Garrett has been coaching Crenshaw football for over 30 years. In his career, he has led the Cougars to five City Section Championships.

“I just thank you [Garrett] for all the four years that I’ve been here and helped me out with grades and school and getting better at football,” said senior football player Mark Martin.

Garrett was presented the Shula award during the 2018 Pro Bowl, another perk that winners of the award gets is to attend NFL Honors and the Super Bowl.

The Cougars had a 9-4 overall record, granting them the opportunity to compete in the inaugural Open Division City Section playoffs. Although they lost to Narbonne in the City Section Championship, Crenshaw qualified to battle on the State level. Defeating Placer High school of Auburn, CA gave the Cougars a division 4 State Championship.

Chargers linebacker Hayes Pullard and nose tackle Brandon Mebane are both Crenshaw alumni. Lynn met Garrett during one of the Charger’s practices.

“He’s put in over 30 years here at Crenshaw High School, I mean that’s just unbelievable,” said Lynn. “The lives that he’s touched, the players that he’s developed and not only did he develop NFL players, they’re going to college and got their degrees.”