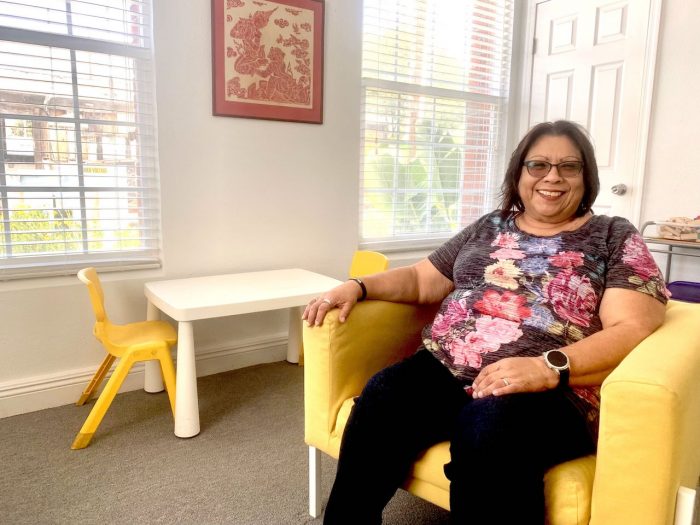 Marianne Diaz’s 20-year counseling career began after a stint in jail for a gang-related arrest. At the time, she was hard and angry and she says the world made her that way.

“I just kind of grew into this gang thing. I tell everybody, it was a persona, I wasn’t really that person, but it helped keep me from getting hurt emotionally. So, I became a very good gang member, I was good at my craft which meant I had to go to prison,” says Diaz, 60, a Los Angeles native.

The “higher learning system” of the streets ultimately led Diaz to jail. “The higher I rose in the prison system, the more important I would be out in the ‘hood,” says Diaz.

As she finished up her four-year sentence, an unlikely mentor extended a hand. It was the sheriff from the gang-unit who arrested her.

“He’d always be like, ‘You’re going to be somebody. And I’m going to be here if you need me,’ and I thought, ‘why the heck would I ever call you again?” says Diaz.

When she got out of prison, the officer helped her get a job at a non-profit group for youth gang services. In the interview, the officer told the hiring manager, “If she doesn’t become the best counselor you have here, I will turn in my badge.” 20 years later and Diaz is the Director of Outreach Services at the Southern California Counseling Center, or SCCC, in Watts.

SCCC-Watts, on Central near 108th, opened up in March 2018 after Diaz pushed for a permanent home for the center. It is situated on the campus of one its partners, Watts Labor Community Action Committee, also known as WLCAC. SCCC was founded in 1966 by psychologist Hans Hoffman and psychiatrist Dr. Ben Weininger. Their mission was to create accessible and affordable counseling and mental health services as they saw mental health to be right not a privilege.

“They believed that people could be supported by people and that it didn’t require extensive schooling or licensing. He felt that if properly trained, people can sit with people and the humanity would take over” says Diaz. “People just need to be heard, and seen and validated.”

Diaz says that initially, the center was run by a wealthier class of liberal White people. Most were paraprofessionals – homemakers, retirees and other occupations — that trained and volunteered as counselors in the center. Today, it is a premiere location for marriage and family therapy training as well as trauma training and domestic violence training. The site is government mandated and probation approved. While a majority of the counselors at the center are working towards a license, there are still several counselors who for whatever reason cannot get licensed including Diaz, whose past felonies prevent her from obtaining professional certification.

“That’s something the center understands,” says Diaz. “Certain communities and populations with less resources, in order to survive may get caught up in certain things. The systemic piece of a lot of things that are attainable to some, are not attainable to others if you have a few bumps in the road.”

This is why Diaz was brought on to the team at SCCC. The center saw a need to diversify their counseling team and center their practices more deeply in the community it serves. Diaz’s past and her experience in the community qualify her beyond the counseling and therapy training she has had over her 20 years as a counselor.

At SCCC-Watts, Diaz says about 99 percent of the clients are government mandated, meaning they are required by the court to complete counseling and therapy. The campus offers required sessions for anger management, parenting counseling, family counseling and couples counseling. There are six men groups, yoga-based stress management and one-on-one counseling provided from a diverse staff which Diaz says is predominantly people of color.

“Counseling is not a White thing, people of color have held counsel for years. We have been meeting in groups, churches and everything, talking to each other, hearing each other and supporting each other,” says Diaz.

Although a majority of the services offered at SCCC are required by the court, the center is open to anyone and everyone who wants care and they offer sliding scale for as low as 10 dollars per session. As mental health awareness increases along with conversations about how communities can heal from mental trauma, so is a need for accessibility and inclusivity.