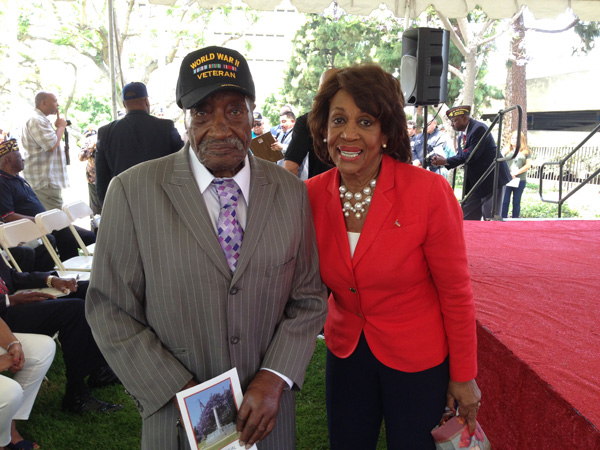 Congresswoman Maxine Waters, Ranking Member of the House Financial Services Committee, honored the memory of all the men and women who have sacrificed their lives in service to our nation during a series of Memorial Day events in the 43rd District of California on Monday, May 29.

“This Memorial Day, I offer my heartfelt appreciation and gratitude to all those who lost their lives in service to our country. Though they are no longer with us, their memory lives on in the spirit and ideals that they so gallantly fought for,” said Congresswoman Maxine Waters. “I proudly join with the Lawndale, Hawthorne, and Inglewood communities in my district as well as Americans all over the world who are celebrating the life and legacy of these brave men and women today.”

She also delivered a keynote address at the City of Hawthorne Memorial Day Ceremony hosted by the Hawthorne Veterans of Foreign Wars Post 2075 and the American Legion Hawthorne Post 314. April 2017 marked the 100th anniversary of America’s entry into World War 1 in 1917, so the 2017 Hawthorne Memorial Day Program was dedicated to the memory of all the men and women who served and lost their lives during the Great War. The program also included presentations by the Hawthorne Naval JROTC Rifle team and the Sons of the American Legion.

The Congresswoman also served as the keynote speaker at the City of Inglewood’s Memorial Day Program which was hosted by the Veterans of Foreign Wars Post 2122 and the American Legion. It also featured the American Legion Auxiliary Jackie Robinson Unit 252 Color Guard and Boy Scout Troops 283 and 636.

In her addresses, Congresswoman Waters emphasized the responsibility that our nation has to care for our veterans, not only in words but also in deeds. “I have the utmost respect and praise for the veteran community and their devotion to our country. Their patriotism is the embodiment of all that this country was founded upon,” said Rep. Waters. “As such, every citizen has a moral obligation to care for the honorable men and women who put on their uniforms and volunteer their lives in service to this country every day. Just as the military pledges to leave no soldier behind on the battlefield, as a nation, let it be our pledge that when our troops return home we leave no veteran behind,” she said.

“Veterans are an important part of our community, and we honor their service on Memorial Day — and every day — on behalf of our nation,” she said. “Please know that my colleagues in the U.S. Congress and I are fighting to make sure that our soldiers come home soon, come home safely, and come home to the promises and opportunities of a grateful nation.”