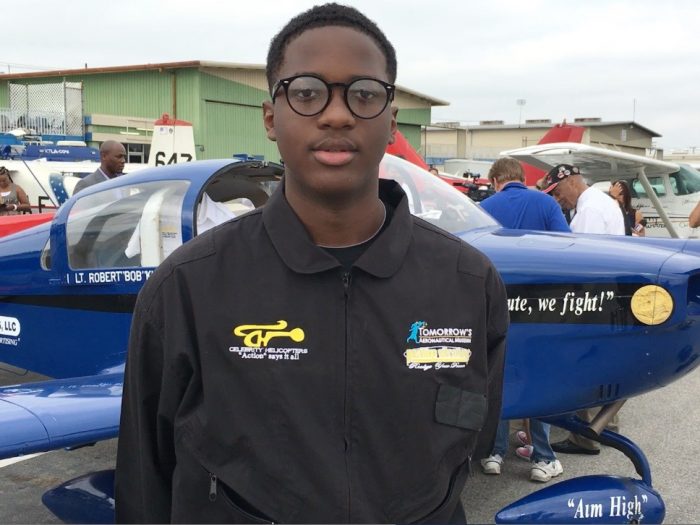 Isaiah, who is a 10th-grader in CUSD’s Thurgood Marshall Independent Study home-schooling program, took flight from Tomorrow’s Aeronautical Museum (TAM) at the Compton/Woodley Airport, Tuesday, July 5, on his way to becoming the youngest African-American to fly an airplane around the continental United States.

While most teenagers are enjoying their summer break, Compton Unified School District’s (CUSD) Isaiah Cooper is piloting his way into the record books at the age of 16.

Isaiah, who is a 10th-grader in CUSD’s Thurgood Marshall Independent Study home-schooling program, took flight from Tomorrow’s Aeronautical Museum (TAM) at the Compton/Woodley Airport, Tuesday, July 5, on his way to becoming the youngest African-American to fly an airplane around the continental United States.

“If I’m successful I want to break Matt Guthmiller and Barrington Irving’s records to be the youngest to fly around the world when I turn 18,” he said.  “I live a block away from the Compton Airport and I grew up loving airplanes as a child. This is what I always wanted to do.”

For his U.S. excursion Isaiah is flying an AA-5 Grummin Cheetah.

Co-pilot and TAM flight instructor Roger Azad, who will supervise the trip to ensure flight safety, is accompanying him.

Isaiah’s flight path takes him from Compton to cities including Chicago, New York, and even Vancouver, Canada.

For Isaiah, redirecting his path towards success proved to be just as challenging.

“I signed up for Tomorrow’s Aeronautical Museum’s after-school programs at the age of five, and from there I’ve been learning to fly. But, when I started middle school in Gardena I jumped out of the program because I started hanging out with the wrong crowd. My grades dropped.” 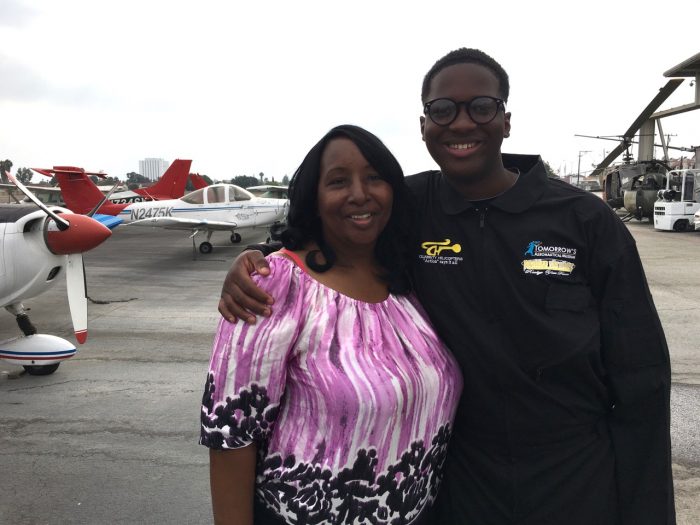 Isaiah says “bye for now” to his mother, Natalia Knox, before flying around the continental United States and into the record books as the youngest African-American pilot to do so.

Isaiah said that a year and a half ago he regained focus after his mother enrolled him in CUSD’s Marshall Independent Study Program.

“It turned my life around because I got my GPA up to 3.7 and was able to come back to Tomorrow’s Aeronautical Museum to start breaking records,” he said. “I’m also representing Compton for what it really is; a good place.”

“Career wise I want to be just like Robin. I want to be a private helicopter pilot and help him run his Celebrity Helicopters business,” he said.

TAM’s Robin Petgrave said Compton success stories like Isaiah’s will continue to happen due to his partnership with Compton Unified.

“Compton Unified School District has been absolutely amazing. They’ve supported us so kids in Compton have access to TAM, which is the ultimate STEM (Science, Technology, Engineering and Mathematics) lab,” he said.

“You achieve so much when you partner with them. They saw our programs as natural fit for getting kids exposed to STEM careers like aviation.” 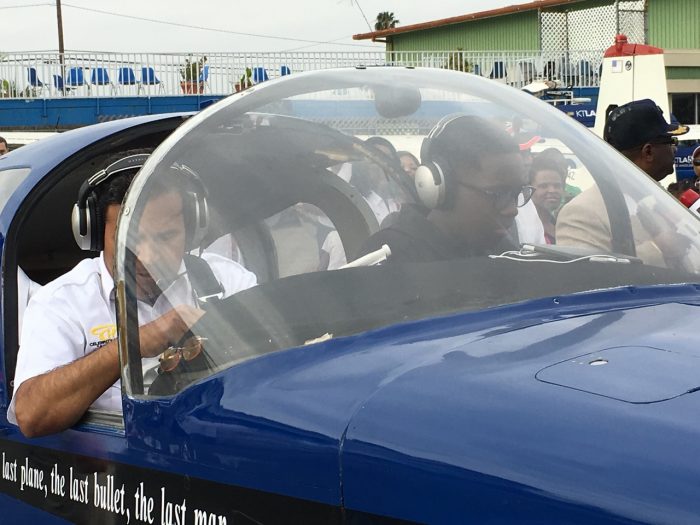 Isaiah’s mother, Natalia Knox, said she couldn’t be more proud of her son and credits Compton Unified’s Marshall Independent Study Program with providing him the educational foundation to turn his life around.

“Compton Unified has given my son an alternative way to get his education, it’s helpful for people who need a little more one-on-one instruction,” she said.

“Isaiah is able to focus on his studies when he’s at home and then he comes to TAM where he works on his homework and continues to learn how to be a professional pilot. It’s paid off because he’s doing amazing things for himself and his city.”

Weather or delays permitting, Isaiah is expected to land at Compton/Woodley Airport and the record books this week.