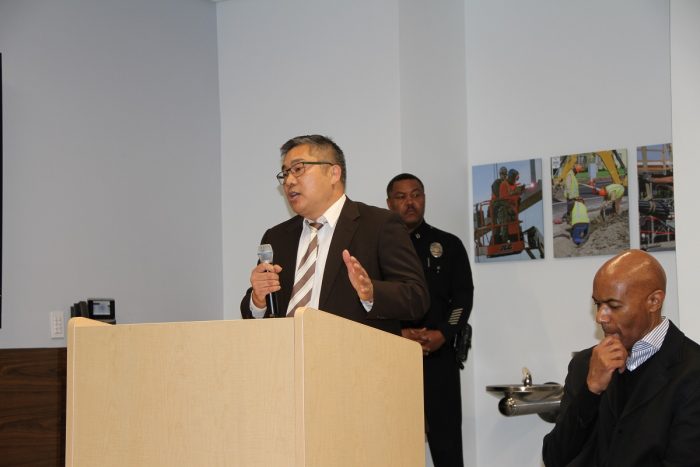 On Fri. Dec. 7, over 100 people packed into the community room of the new Kaiser Permanente Baldwin Hills – Crenshaw Medical Offices to hear the latest details on the investigation into the painted swastikas on the “Our Mighty Contribution” mural better known as the Crenshaw Wall.

“We know at this point that the crime occurred at approximately between 8 p.m. Wednesday night and 8 a.m. the next morning,” explained veteran LAPD Southwest Investigating Detective Anthony Kong. “We know this because Bethesda Temple Church had services until 8 that night and the people that left did not notice any type of graffiti on the wall. Additionally, looking at the type of vandalism–type of paint –there was wet paint about a foot radiance on all four faces. It was probably applied sometime before midnight because midnight was when the downpour–and there was on-and-off rain all night. There was no streaking when you [look] at the damage–there was no streaking.”

Det. Kong concluded his comments by calling on the community to help solve the crime.

“Unfortunately there were no eyewitnesses.”

Kong asked for witnesses who may have been driving down Crenshaw Blvd. between 8 p.m. and midnight on Nov. 29 to call him if they remember seeing anything or anyone.

“If you want to remain anonymous, we have the Crime Stoppers phone where you can make the tip.”

LAPD Southwest Detective Commanding Officer, Perry Griffith, whose team is responsible for investigating all crimes that happen in Southwest Division said that there had been 35 hate crimes to date in his division which includes Leimert Park, Baldwin Hills, West Adams, Jefferson Park, Exposition Park and University Park.

Griffith explained the difference between how the LAPD categorizes a hate crime verses a hate incident and said that swastikas painted on the mural were viewed by the LAPD as a hate crime.

Despite assurances from the LAPD that this case was a priority for the department, many in the audience remained skeptical of their ability to catch the person or person’s behind the hate crime. 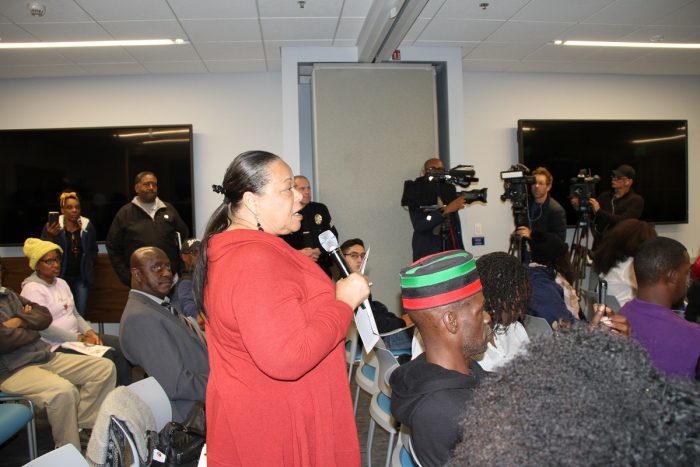 A man who identified himself only as Calvin said, “You got cameras all up and down the street and you got cars that ride around the city that see everything happening so I don’t understand how in the world that you don’t see a guy putting swastikas on a wall. Because if a murder would have happened right then and there they would have caught the guy. There would have been a witness. He would have been in jail and he would have gotten 25 years to life. All you have to do is just do your job and you can bring the person to justice anything other than that is just bull—-.”

“What are we going to do to self-protect?,” questioned Khalifa Bey to applause. “We need to come up with our own strategy. Those who are security guards and have a guard card and can carry–we can start that on tomorrow.”

Others in the audience wanted to know more about the credentials of the investigating detectives and the number of crimes they had solved.

Organizer, Keyanna Celine, questioned where or not the investigating detectives had looked into possible involvement of white nationalist groups and the Oath Keepers, a far-right anti-government group who earlier this year bailed on a plan to protest outside of Rep. Maxine Waters’ district office in South Los Angeles.

Ben Caldwell, who is known as the “Father of Leimert Park” and runs the Leimert Park Art Walk and manages for-profit community media lab, Kaos Network, said that hate crime makes him mad.

“But the beauty is the wonderfulness that you saw Enk do with the work and it was off instantly and we can go on with the job of being our African selves,” Caldwell told the audience.

As of Sentinel press time, the case remains unsolved and police are still seeking the unknown suspect or suspects who spray painted the swastikas on the mural. Witnesses are encouraged to call (800) 222-847 with tips. 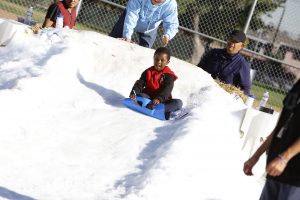 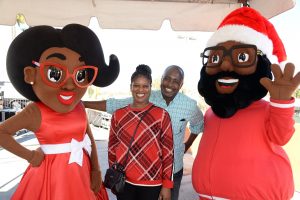 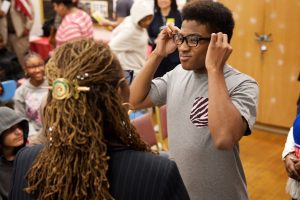 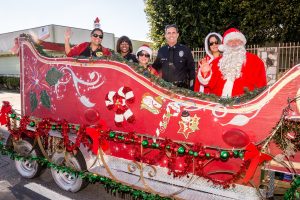 A Christmas Story—What Does Christmas Mean to You? 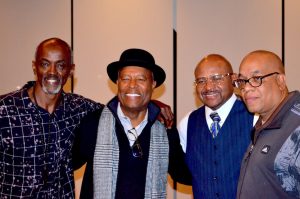