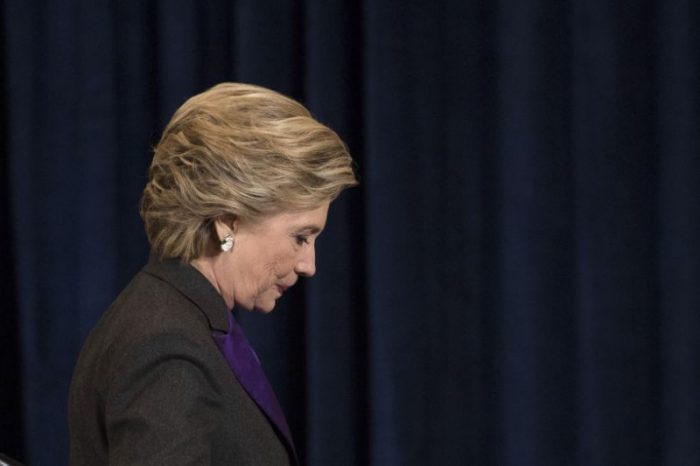 Democratic presidential candidate Hillary Clinton walks off the stage after speaking in New York, Wednesday, Nov. 9, 2016. Clinton conceded the presidency to Donald Trump in a phone call early Wednesday morning, a stunning end to a campaign that appeared poised right up until election day to make her the first woman elected U.S. president. (AP Photo/Matt Rourke)

Hillary Clinton is blaming the FBI’s decision to revive its examination of her email accounts for her devastating defeat in the presidential election.

On a call last Saturday with top campaign donors, Clinton said her campaign was winning until FBI director James Comey sent a letter to Congress on Oct. 28 announcing that the FBI had uncovered emails possibly related to its earlier probe into her use of a private server as secretary of state. The new examination was sparked by an unrelated investigation into former New York Rep. Anthony Weiner, the estranged husband of one of her top aides.

The surprise announcement by the FBI came after three debates in which Republican Donald Trump was widely panned for his performance. Clinton told the donors that her campaign was leading by large margins in nearly every battleground state and was tied in Arizona, a traditionally Republican stronghold, until Comey released his letter.

Trump’s campaign and Republican supporters seized on the news, even though it was unclear whether Clinton’s correspondence was tied up in the probe.

Comey told lawmakers the Sunday before the election that the bureau had found no evidence to warrant criminal charges. His “all clear” message only served to further motivate Trump supporters, Clinton told donors on the call.

In the nine days between Comey’s initial statement and his “all clear” announcement, nearly 24 million people cast early ballots. That was roughly 18 percent of the expected total votes for president.

While Clinton accepted some blame of her loss, said donors who listened to her call, she made little mention of the other factors driving Trump’s victory: A desire for change by voters, possible sexism, the difficulty of a political party winning a third White House term, her campaign’s all-but-dismissal of white working class voters and flaws within her own message.

Donors on the call were not authorized to discuss her comments by name and requested anonymity to describe them to The Associated Press.

Democrats have spent much of this week reeling for their loss, with many in the party beginning a process of soul-searching designed to sort out what exactly went wrong. Liberals like Vermont Sen. Bernie Sanders and Massachusetts Sen. Elizabeth Warren say Democrats must embrace a more aggressive economic message — one Clinton largely shied away from during her campaign.