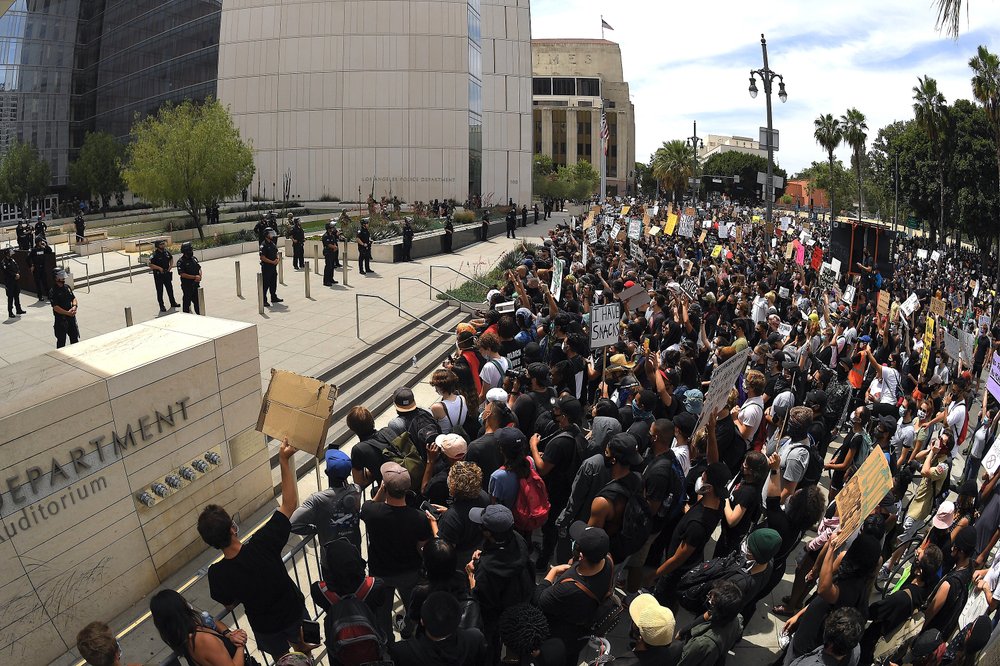 Caption1: In this June 2, 2020, file photo, demonstrators kneel in front of Los Angeles Police Department headquarters during a protest in Los Angeles over the death of George Floyd, who died May 25 after being restrained by Minneapolis police. (AP Photo/Mark J. Terrill, File)

The Los Angeles City Council voted today to cut $150 million from the police department’s budget next fiscal year, following weeks of demands from activists to reduce funding for law enforcement.

The City Council’s Budget and Finance Committee voted recently to reduce the cut to the Los Angeles Police Department by about $17 million and use most of the money to stop possible furloughs of city employees, but during a late-Monday meeting, the committee voted to restore the $150 million reduction and use most of it for improving underserved areas and communities of color.

“(Councilman Curren) Price, our vice chair in Budget and Finance, led an effort to ensure that not only were those savings realized in the LAPD budget, but there would also be steps taken to approve $90 million, which would be available to protect critical city services, including Targeted Local Hire and to begin reinvesting in disadvantaged communities and communities of color and reimagining public safety,” Councilman Paul Krekorian, who chairs the council’s Budget and Finance Committee, said during Tuesday’s full City Council meeting.

“This gives us an opportunity to do those things. It also sets aside money to protect our Summer Youth Hiring Program this year, and the remaining balance will go into the (unassigned) reserve for mid-year adjustments, which we will certainly be needing to make throughout the fiscal year.”

The council voted 12-2 in favor of the budget adjustments with no discussion, and Councilmen Joe Buscaino and John Lee cast the dissenting votes.

This year’s budget process for Los Angeles is unlike any other due to the COVID-19 pandemic, and the City Council voted on financial adjustments to a spending plan that’s already in effect, as the fiscal year began Wednesday.

Lee said it’s still important to acknowledge how far the LAPD has come in its reformation from decades ago. He said two-thirds of LAPD officers are people of color and that the department has been a “model” in its reforms.

“We all need to constantly strive to be better, but it’s also important for this council to recognize when we have moved forward, and it’s important that our city sees that our promises are not just empty words,” Lee said. “Decades ago, our city made a promise to reform LAPD, and that is exactly what we have done.

“I’m not saying LAPD is a perfect organization. There’s always room for improvement, but … other police departments throughout the nation strive to follow them on their community policing, use of force, de-escalation and implicit bias training.”

The proposed operating budget of the LAPD was about $1.86 billion before the proposed cuts, which have been derided by the Los Angeles Police Protective League, the union that represents the department’s roughly 9,900 sworn officers. 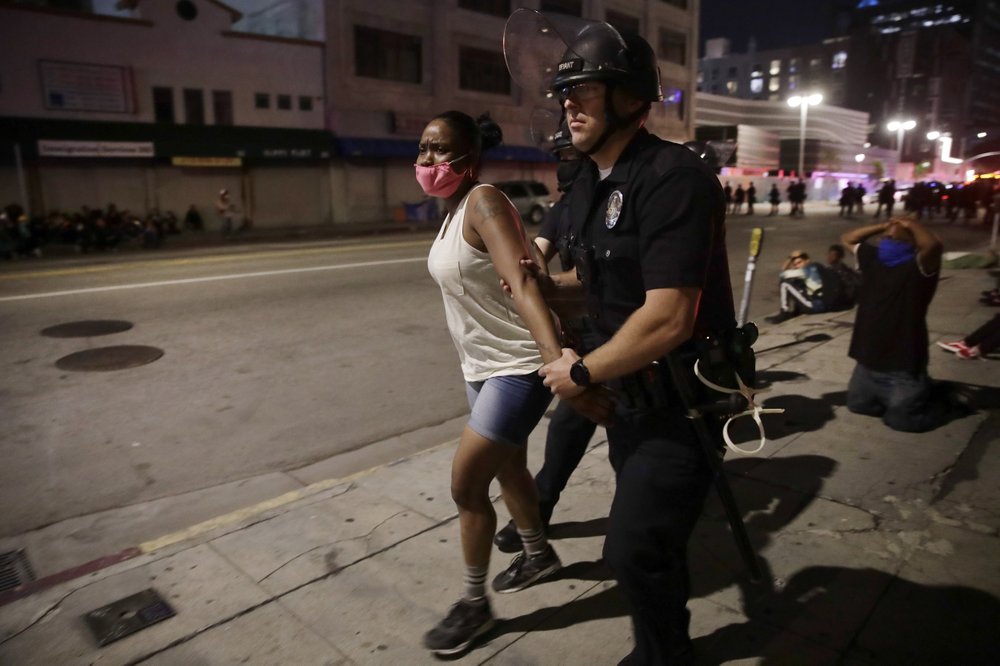 In this May 31, 2020, file photo, a police officer arrests a woman as protests over the death of George Floyd continued in Los Angeles. (AP Photo/Jae C. Hong, File)

“I want to take this time to acknowledge Black Lives Matter-LA organizers and others for keeping our feet to the fire and demanding more from our government,” Price said on Tuesday. “(This has been) a movement that has amassed support from every corner of the globe and shows no signs of stopping.

“The conversations that we’ve been having today, from reducing the LAPD budget and reallocating the money for social services to changing policing policies, would not happen if it hadn’t been for their efforts.”

Of the $150 million cut, about $40 million will be used to help avoid planned furloughs of city employees in an effort to save $139 million.

According to city documents, based on May receipts, estimates from the Office of Finance, the Department of Transportation and information concerning sales and electricity users tax receipts show the city’s revenue for 2019-20 is estimated to be $6.32 billion — about $253.5 million below the 2019- 20 proposed budget.

Revenues in the 2021 fiscal year are difficult to forecast due to the pandemic, with the City Administrative Officer’s staff reporting they could be about $6.68 billion, but staff also said they could be anywhere between $45 million to $409 million below that estimate.

One of the red flags council members have brought up in committee meetings is the city’s dwindling reserve funds that were used to respond to the COVID-19 pandemic.

As it stands, the city’s reserves in the 2020-21 fiscal year are expected to be below the city’s minimum target of 2.75% of the general fund, with about $227 million remaining, but the council voted to find ways to move funds from various departments and resources to raise the reserve fund to $284 million, according to city documents.

This is still well below the city’s aspirations of having 5% in reserves across the board and lower than the almost 8% it had prior to the pandemic.

The City Council will be in recess through July 28, a mid-year break it takes every year.