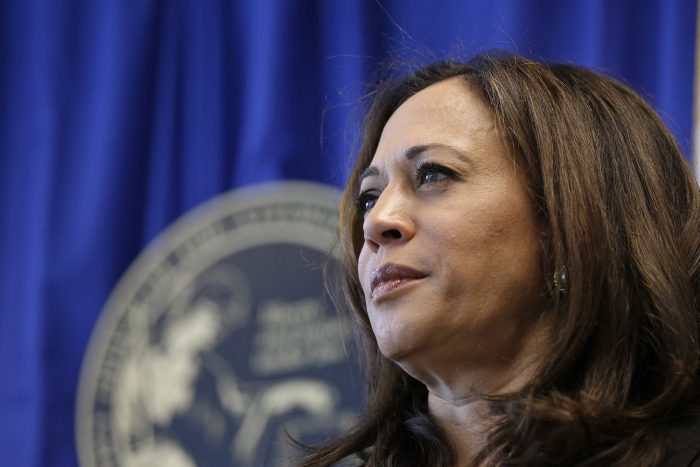 California Attorney General Kamala Harris listens to questions about a settlement with Volkswagen during a news conference Tuesday, June 28, 2016, in San Francisco. Volkswagen will spend up to $15.3 billion to settle consumer lawsuits and government allegations that it cheated on emissions tests in what lawyers are calling the largest auto-related class-action settlement in U.S. history. Up to $10 billion will go to 475,000 VW or Audi diesel owners, who thought they were buying high-performance, environmentally friendly cars but later learned the vehicles’ emissions vastly exceeded U.S. pollution laws. (AP Photo/Eric Risberg)

LOS ANGELES (AP) A California panel tasked with attempting to eradicate racial profiling by police held its first meeting Friday, with the nation stunned by the police shootings of two black men in Minnesota and Louisiana, followed by the Dallas attack that killed five officers.

An emotional Attorney General Kamala Harris urged the group to seek truth about a difficult problem at a time of turmoil. The Racial and Identity Profiling Advisory Board was created by the Legislature last year to address the frequent complaint that police too often target people based on the color of their skin.

The career prosecutor, who is black and Indian, credited police for their commitment to a dangerous job serving the public. But she added that she didn’t know a black man among her relatives and friends who has not been subjected to profiling or unreasonable treatment.

“This has to be a moment when we speak the truth, and in speaking the truth, heal,” Harris said.

“We know the pain that folks are feeling, the pain of those families, in Baton Rouge and Minneapolis and Dallas, and all over our country,” she added.

The fatal police shootings of black men in Minnesota and Louisiana set off protests around the country, including in Oakland, California, where about 2,000 people blocked a highway and smashed windows, leading to seven arrests, authorities said.

The panel’s job will include helping the state Justice Department establish a system to collect data from police on how they conduct traffic and pedestrian stops, then analyzing that information and making recommendations.

Its first step is to consider what information should be collected, which could range from details of traffic stops to documenting the work experience of officers involved.

Some board members noted that it would take goodwill from police and those they serve to make progress.

“If both sides don’t come together, we are not going to accomplish a lot,” said Gardena Police Chief Edward Medrano, representing the California Police Chiefs Association.

Harris says bias in the criminal justice system is destructive to the trust needed between police and communities.

She told reporters that the violence of recent days is “really highlighting something that we have to deal with in our country.”