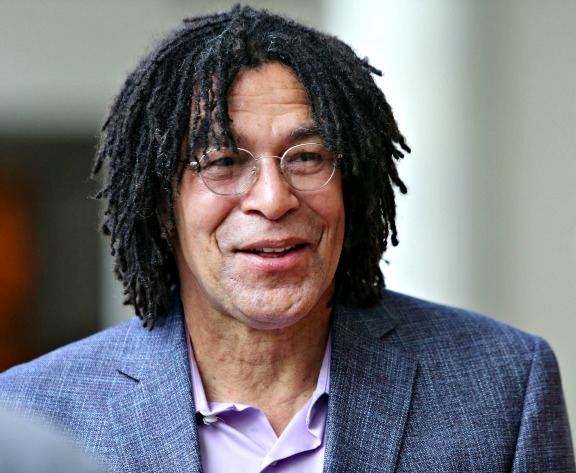 Greenfield is one of seven artists whose works will enrich the project, which will feature three new stations and connect rail lines from Azusa, Long Beach and Santa Monica.

“Public art represents an investment in a community; it’s among the things that gives a community value,” says Greenfield, who was pleased to learn that he’d been selected to create art for the station being constructed at 2nd Street and Broadway in downtown Los Angeles.

A native Angeleno and son of a Tuskegee Airman, Greenfield spent his early childhood on military bases from Taiwan to Germany. After returning to Los Angeles, he attended an art program at the Otis Art Institute and studied under Charles White and John Riddle. He earned his Master of Fine Arts degree in painting and drawing from Cal State LA in 1987.

“Cal State LA is proud of Mark Steven Greenfield, who along with such alumni as Kent Twitchell and Frank Romero, have made significant and lasting contributions to public art in Los Angeles and elsewhere,” said University Vice President Jose A. Gomez.

For the Metro station project, Greenfield created Red Car Requiem, an homage to the historic Red Car rail line, which carried commuters throughout Los Angeles from 1901 until the early 60s.

“The Red Car disappeared in 1962, almost overnight,” Greenfield recalls. “I never got a chance to say goodbye to it. I really liked it.”

Red Car Requiem is an abstract piece that will be created from one inch squares of tile. It will stretch 10 ft. tall and 139 ft. long. The mosaic includes eight rosettes and sweeping designs that represent motion and transportation. Dark marks inside the rosettes represent ticket punches. During the days of the Red Car, each conductor possessed a signature ticket punch that indicated a particular line.

The piece plays off the color of the Red Car, with hues of red, red-orange, orange and yellow.

“This is all an abstraction,” Greenfield says. “I knew what I was doing when I was [creating] it, but the average person will probably need a primer.”

The piece may have added meaning for those who experienced a ride on the Red Car.

Broadway was a major thoroughfare for the Red Car, which made Greenfield’s commission to create art for the station at 2nd and Broadway especially relevant. Fabrication of the piece at the station is expected to take two-to-three years.

Abstract art is one element of Greenfield’s extensive collection. His art explores the complexities of the African American experience in contemporary society.

Some of his art focuses on the effects of stereotypical blackface minstrelsy and black cartoon characters from the 1930s and ’40s, exposing a painful part of American culture that many people would rather ignore. Other projects have included references to ancestor reverence in African spiritual practices.

As an artist, Greenfield’s goal is not to impose a particular view, but to encourage thought.

“By and large the artist wants the person looking at the work to think about something,” Greenfield says. “In the case of my piece, I want you to remember. It’s about memory.”

Greenfield held positions as a visual display artist, a park director, a graphic design instructor and a police artist before enrolling at Cal State LA. From 1993 to 2010, he was an arts administrator for the Los Angeles Department of Cultural Affairs, serving first as the director of the Watts Towers Arts Center and the Towers of Simon Rodia, and later as director of the Los Angeles Municipal Art Gallery. He is a former president of the Los Angeles Art Association/Gallery 825. Currently, he is on the board of directors at Side Street Projects, and he teaches at Los Angeles City College.

White House “Roundtable on Diversity, Youth, and the Outdoors” to Inclu...
No-Burn Alert: Mandatory Wood-Burning Ban in Effect Through Wednesday, Dec...
Have You Taken Advantage of America’s Hard Fought Healthcare?