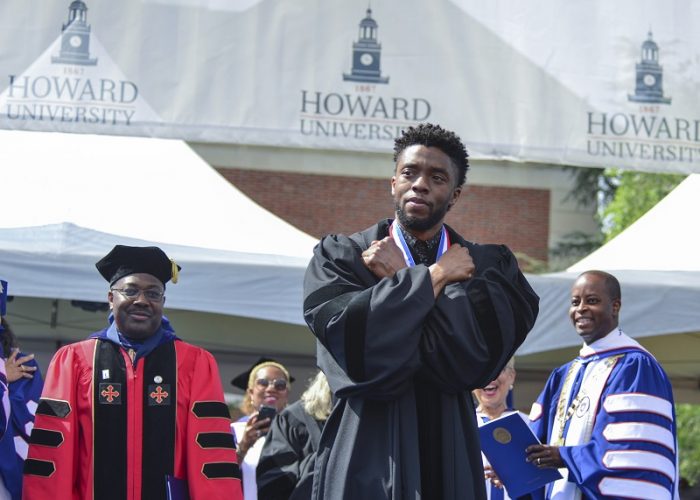 In March, Marvel’s “Black Panther” became the highest-grossing superhero movie of all-time in the United States (not adjusted for inflation), when it surpassed the $623 million mark set by “The Avengers” in 2012, according to Variety.com. Then, Boseman reprised his “Black Panther” role for “Avengers: Infinity War,” which is currently the fifth highest grossing movie of all-time.

Championing his own personal experiences during his time studying at the prestigious, historically Black university, Boseman urged proud degree recipients, to press forward, to hold up their heads and to never fear rejection.

“I can think of no better place to be right now, after the ‘Black Panther’ and ‘Avengers’ campaigns, than to return and participate in these graduation ceremonies with you,” Boseman told the graduates. “It is a great privilege, graduates, to address you on your day, a day that will be one of the most important accomplishments of your life to date.”

Howard University President Dr. Wayne A. I. Frederick recalled “how Boseman and his classmates advocated and participated in a three-day protest against the university to dismiss an initiative to transition the College of Fine Arts into the Department of Fine Arts. The protest was unsuccessful in stopping the transition,” a press release about the president’s speech said.

Dr. Frederick encouraged the graduates to “take risks” and “learn how to be wrong.”

“It is the best way to learn and grow,” Dr. Frederick said. “Build a culture of generous listening so that others may be emboldened to take risks, too.”

According to school officials, during the 2018 commencement convocation, Howard University awarded 2,217 degrees, including 343 master’s degrees, and 90 Ph.Ds.

Boseman called Howard University “a magical place” as he recalled the day that he met Muhammad Ali, as he walked across “The Yard.”

“I remember walking across this yard on what seemed to be a random day, my head down, lost in my own world of issues like many of you do, daily. And I raise my head…Muhammad Ali is walking towards me,” Boseman said. “Time seemed to slow down, as his eyes locked on mine. He then raised his fist into a quintessential guard and I was game to play along with him, to act as if I was a worthy opponent. What an honor to be challenged by ‘The Greatest of All-Time.’”

Boseman continued: “I walked away floating like a butterfly. I walked away, at that moment, amused at life, amused that no one would be able to believe that story, but me. That is the magic of this place [Howard University].

Boseman also praised the students for their drive and perseverance in organizing the longest sit-in protest at Howard University’s administration building in the school’s history. Allegations of mismanagement in the school’s financial aid office sparked the protest, which lasted nearly two weeks in April.

“Everyday that you fought for, was not for yourself, but for those that come after you,” Boseman said.

Overcome with gratitude and excitement, Howard graduate Kyla Maupin, who received her degree in French, expressed her sentiments about Boseman’s speech.

Maupin added that she was proud to see a fellow Bison deliver the commencement address.

Closing out the high-energy ceremony, Boseman offered one last nugget of wisdom, urging graduates to find their purpose.

“Purpose is the essential element of you,” Boseman said. “It is the reason you are on the planet at this particular time in history. Your very existence is wrapped up in the things you are here to fulfill.”

Boseman continued: “Whatever you choose for a career path, remember the struggles along the way are only meant to shape you for your purpose.”