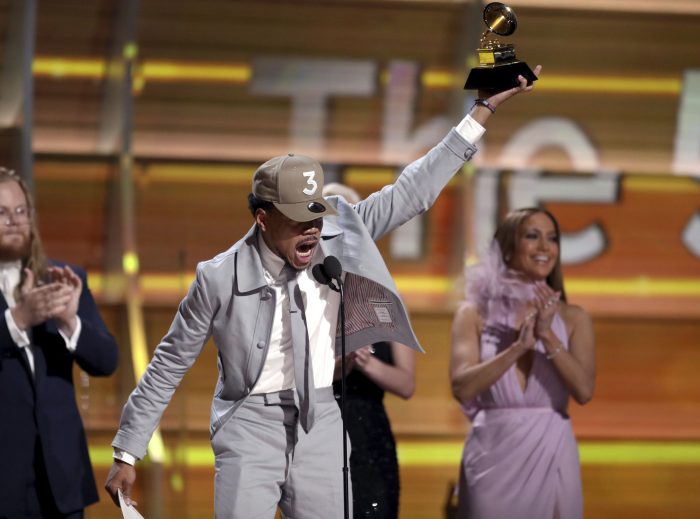 Chance The Rapper accepts the award for best new artist at the 59th annual Grammy Awards on Sunday, Feb. 12, 2017, in Los Angeles. (Photo by Matt Sayles/Invision/AP)

The 59th annual Grammy awards opened up with singing sensation The Weeknd, who performed, “Starboy,” and “I Feel It Coming,” featuring a special guest collaboration with EDM pop group Daft Punk. 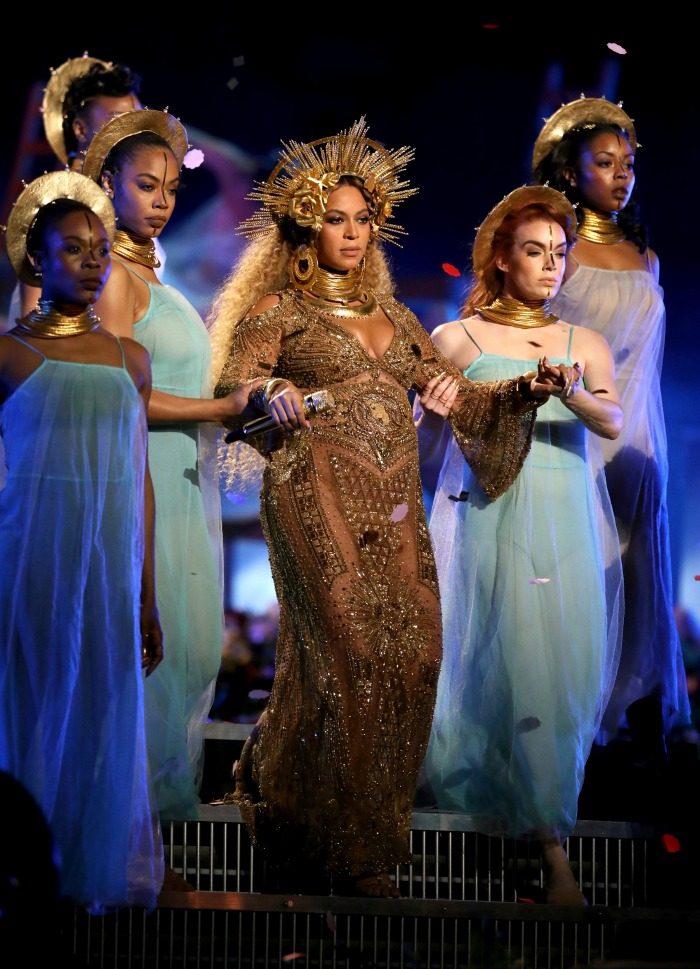 The mother of Beyoncé, Tina Knowles, introduced her daughter for her live Grammy performance while simultaneously acknowledging her other songstress daughter, Solange, with a speech speaking on how thankful and appreciative she felt for her children and their careers. Beyonce’s husband rap superstar Jay-Z, was in the audience supporting along with their daughter Blue Ivy.

Beyoncé opened her Grammy performance with a video tribute celebrating the struggle of Black women and highlighting the strength and empowerment of all women. She performed “Love Drought” and the hit single “Sandcastles,” which was written by Vincent Berry, II.

The video tribute featured an appearance from her mother as well as her daughter. Beyoncé graced the stage looking royal in a gold outfit resembling the garbs of America’s statue of liberty. Beyoncé showcased her pregnant belly confirming reports she is expecting twins with her husband Jay-Z.  Beyoncé looked stunning performing pregnant. She did not miss a beat as to say, here I am, take me as I am. Black, pregnant and beautiful!

The Knowles sisters had a victorious night as Beyoncé won two Grammys. She won for Best Urban Contemporary Album, for the album “Lemonade,” and a second Grammy for “Best Music Video” for the song “Formation.” Solange won her first Grammy award for Best R&B Performance, for the song “Cranes in the Sky”. 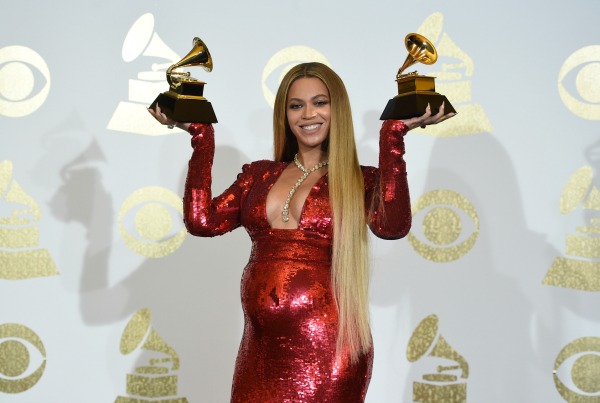 Beyonce poses in the press room with the awards for best music video for “Formation” and best urban contemporary album for “Lemonade” at the 59th annual Grammy Awards at the Staples Center on Sunday, Feb. 12, 2017, in Los Angeles. (Photo by Chris Pizzello/Invision/AP)

Beyoncé was very passionate during her acceptance speech on stage reading from a gold notecard sharing, “We all experience pain and loss and often we become inaudible. My intention for the film and album was to create a body of work that will give a voice to our pain, our struggles, our darkness and our history, to confront issues that make us uncomfortable,” she said. “It’s important to me to show images to my children that reflect their beauty so they can grow up in a world where they look in the mirror, first through their own families, as well as the news, the Super Bowl, the Olympics, the White House, and the Grammys, and see themselves. And have no doubt that they’re beautiful, intelligent, and capable. This is something I want for every child of every race, and I feel it’s vital that we learn from the past and recognize our tendencies to repeat our mistakes.”

Solange spoke backstage during the Grammy award show about her status as a fashion icon and how important fashion is to her music. “I think that visual art in all aspects are super important to me whether it be through the creation through my music videos or my album artwork,” said Solange. “Creating strong visual representation of not only myself but again, Black women and getting to see us as avant-garde beings in a world that sometimes puts us in a box is really important to me.” 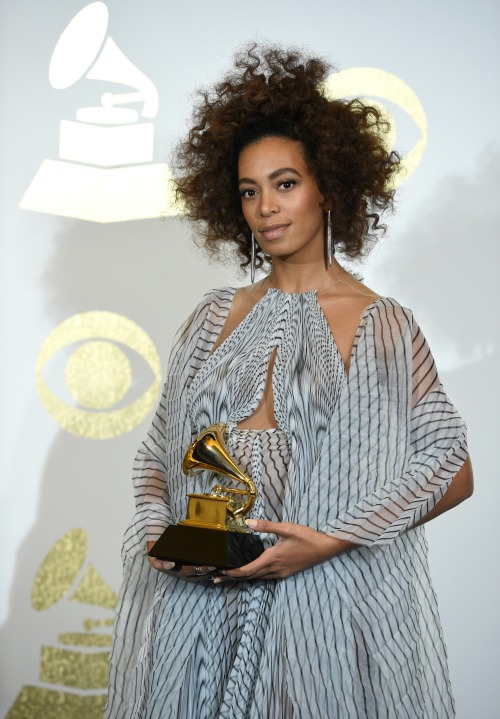 Solange poses in the press room with the award for best R&B performance for “Cranes in the Sky” at the 59th annual Grammy Awards at the Staples Center on Sunday, Feb. 12, 2017, in Los Angeles. (Photo by Chris Pizzello/Invision/AP)

As for who inspires her, Solange shared that she looks to legends such as Nina Simone and Marvin Gaye and the artists of our times that have really pushed political messages through their music and their artistry.

“I think all we can do as artist is write what is true to us,” said Solange. “And I think that the music that is out right now and really connecting and thriving reflects that and I am really grateful to those artists pushing for paying it through because it’s not easy. It’s scary putting yourself out there on the line when you are making political and social statements with your work. So, I just honor the greats. I look to Nina Simone who did that during a time where it’s interesting. The trajectory of her career now she is being so celebrated and revered, she was really shut up during that time and really told to just sing. Those are the artists that paved the way for us to do what we are doing now, so we are not doing nothing new.”

Solange introduced the rap performance collaboration of Anderson .Paak and Tribe Called Quest which paid tribute to late member Phife Dawg, of Tribe Called Quest who passed away in 2016. Anderson .Paak displayed his versatility playing the drums, singing and rapping. Hip hop legend Busta Rhymes joined the Grammy performance and sarcastically said that he wanted to thank President “Agent Orange,” referring to President Donald Trump.  The performance highlighted the negative stigma of immigrants that are under attack by the current administration. The group brought out different people representing immigrants throughout American history. “Resist, Resist, Resist”, chanted the rap performers on stage.  “We the People”! 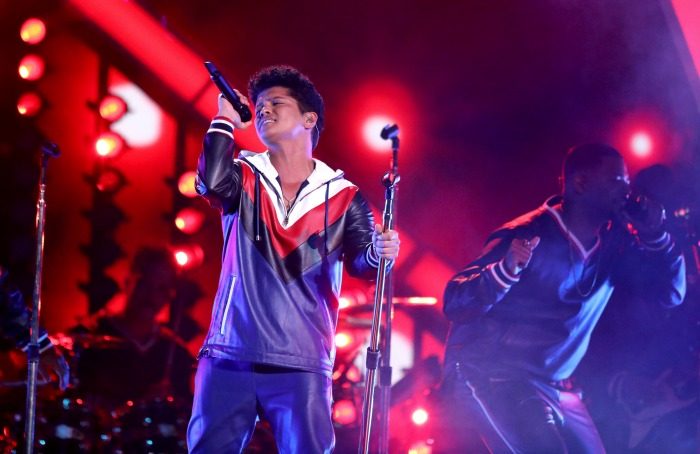 Bruno Mars performs “That’s What I Like” at the 59th annual Grammy Awards on Sunday, Feb. 12, 2017, in Los Angeles. (Photo by Matt Sayles/Invision/AP)

Bruno Mars may have been the best overall performance of the night giving the audience a taste of his versatility performing “That’s What I Like,” serenading the women in the audience with the line, “can I break it down?”

The awkward moment of the night went to international superstar Adele during her tribute to the late George Michael while performing his record, “Fast Love.” Adele messed up during the beginning of her performance and asked for forgiveness for cursing on live television. She started the entire performance from the beginning which is something I cannot recall ever happening in Grammys history. The year prior, Adele experienced technical difficulties during her live Grammy performance so by her sharing backstage with writers she is “anal,” and a “perfectionist,” she obviously was not going to allow for another mishap to mess up her live tribute to Michael.

Adele won all of her nominated categories taking home 5 Grammy’s. She is the first person to sweep, album, record and song of the year, twice. Social media erupted, as many Beyonce fans were upset that Adele beat her out for both album and record of the year but it’s important to note Adele gave Beyonce proper respect during her speech. ‘The Lemonade’ album was so monumental and so well thought out, so beautiful and soul barring,” said Adele.

Chance has broken barriers the last couple of years becoming an independent pop phenomenon. Chance also took home the Grammy awards for “Best New Artist,” and “Best Rap Performance,” for the hit song, “No Problem.”  Chance the Rapper thanked God and shared he didn’t know he was going to win. “This is for every indie artist,” said Chance. “Shout out to DJ Drama who did if first.” 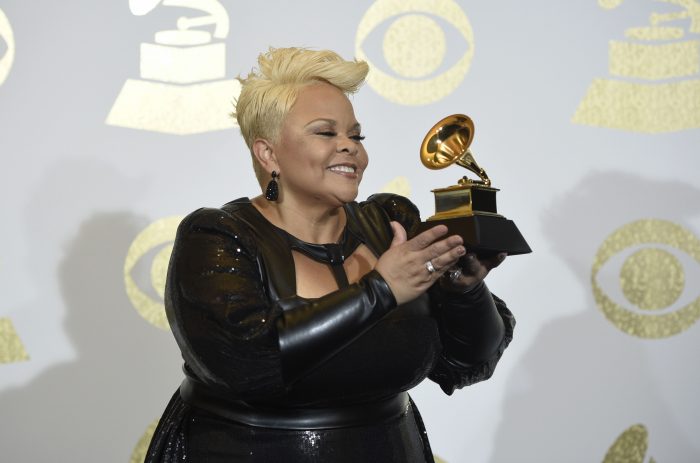 Tamela Mann poses in the press room with the award for best gospel performance/song for “God Provides” at the 59th annual Grammy Awards at the Staples Center on Sunday, Feb. 12, 2017, in Los Angeles. (Photo by Chris Pizzello/Invision/AP

The soul group The Time, gave a wonderful performance tribute to the legendary career of Prince, who passed away in 2016.  The Time performed the hit records, “Jungle Love” and “The Bird.” Bruno Mars graced the stage for the tribute performance showcasing his versatility playing the guitar like he was Prince and singing a rendition of Prince’s, “Let’s Go Crazy.”

The Sentinel caught up with the group The Time backstage and asked them how important they felt Prince’s legacy is to music? Morris Day of The Time responded by saying, “He (Prince) was one of the best ever. His legacy will go on forever and he is just one of the best musicians that ever lived.”

John Legend and Cynthia Erivo performed and gave tribute to those who passed away since the last Grammy awards telecast. Al Jarreau (76) passed away the morning of the award ceremony and was acknowledged by group Pentatonix on stage before they performed an acapella rendition of “ABC,” by the Jackson 5.

Other notable Black entertainers that took home Grammy’s were:

Superstar actor Don Cheadle and his collaborators, Steve Berkowitz and Robert Glasper, for “Best Compilation Soundtrack for Visual Media,” for the movie “Miles Ahead,” based on the life of Jazz legend Miles Davis who Cheadle portrays in the film.

For post coverage and videos interviews from the 2017 Grammy Red Carpet, visit www.lasetninel.net. 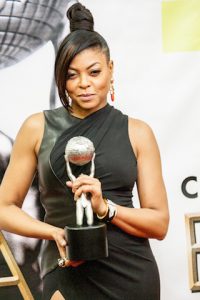 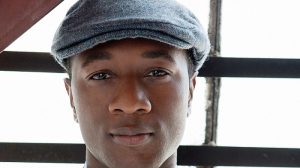 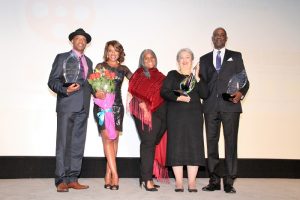 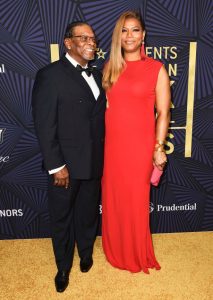 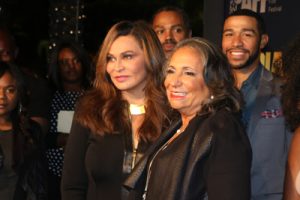