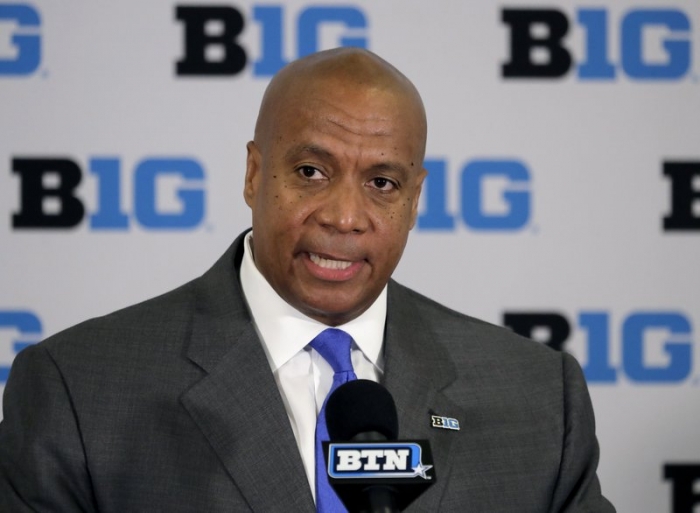 In this June 4, 2019, file photo, Minnesota Vikings chief operating officer Kevin Warren talks to reporters after being named Big Ten Conference Commissioner during a news conference in Rosemont, Ill. After the Power Five conference commissioners met Sunday, Aug. 9, 2020, to discuss mounting concern about whether a college football season can be played in a pandemic, players took to social media to urge leaders to let them play.(AP Photo/Charles Rex Arbogast, File)

The Big Ten and Pac-12 called off their fall football seasons on Tuesday because of concerns about COVID-19, taking two of college football’s five power conferences out of a crumbling season.

Five months after the first spikes in coronavirus cases in the U.S. led to the cancellation of the NCAA basketball tournament, the still raging pandemic has begun tearing down a sport that generates billion of dollars for the schools that compete in it. Despite pleas from players, coaches and President Donald Trump in recent days to play on, 40% of major college football teams have now decided to punt on a fall season.

The Big Ten’s announcement, that it was postponing all fall sports and hoping to make them up in the second semester, came first Tuesday afternoon. An hour later the Pac-12, the Big Ten’s Rose Bowl partner, called a news conference to say that all sports in its conference would be paused until Jan. 1, including basketball.

“This was an extremely difficult and painful decision that we know will have important impacts on our student-athletes, coaches, administrators and our fans,” Pac-12 Commissioner Larry Scott said. “We know nothing will ease that.”

The Atlantic Coast Conference, Big 12 and Southeastern Conference are still moving forward with plans to conduct a season as college football’s lack of centralized leadership has left every conference to decide for itself.

The Big Ten’s announcement came six days after the conference that includes historic programs such as Ohio State, Michigan, Nebraska and Penn State had released a revised conference-only football schedule that it hoped would help it navigate a fall season with potential COVID-19 disruptions.

The decision was monumental but not a surprise. Speculation has run rampant for several days that the Big Ten was moving toward this decision. On Monday, coaches throughout the Big Ten tried to push back the tide, publicly pleading for more time and threatening to look elsewhere for games this fall.