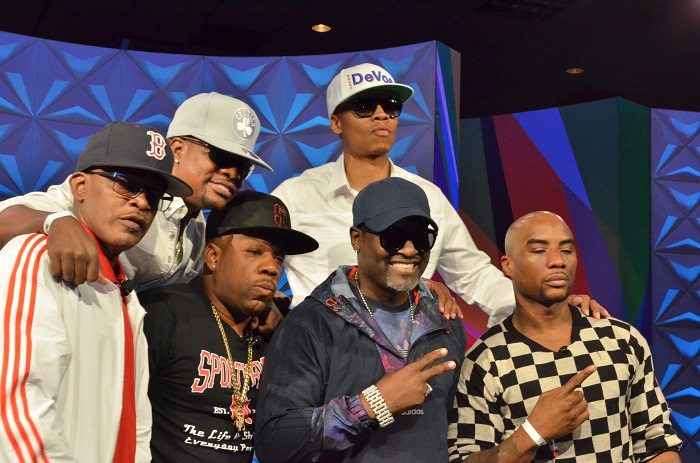 On Saturday, June 24, fans of all ages gathered inside the Los Angeles Convention Center for day three of the four-day BET Experience Fan Fest.

At 5pm, Fan Fest goers took a break from dancing, singing, and eating to see the legendary music group New Edition at the annual BET Experience Genius Talks. Moderator and TV personality, Charlamagne Tha God led the discussion with questions about producing “The New Edition Story” and what it was like reliving those moments on camera.

“Some of the most uncomfortable parts in this process was sitting in a room for about two days sharing stories,” he said. “During the writing process, there were conversations that should have taken place 20-25 years ago. Once we told the story, our biggest challenge was letting go and trusting Jesse Collins, Abdul Williams the writer, and Chris Robinson to tell the story in an authentic way.”

New Edition member Ronnie DeVoe spoke on the new generational wave of fans that have been introduced to their music.

Members of the group went on to discuss the new generation of fans and their perseverance.

“You see a whole new generation just doing all of the songs and watching them do the routines and you go to concerts and see little babies,” said New Edition member Johnny Gill.  “It is just really amazing and I see some of everyone.

“We have gone through so much and through this process, we have been told every time we knock on the door, majority of the time, ‘no you can’t’ at one point we stopped touring.”

After the Genius Talk session came to an end, fans rushed to the stage to take photos of the group. Although the interview was over, the BET Experience weekend continued with live performances and special celebrity appearances.

The following day, on Sunday, June 25, New Edition and the miniseries cast hit the BET Awards stage to perform some of their greatest hits like, “Mr. Telephone Man,” “Can You Stand the Rain,” and “If It Isn’t Love.”

“It’s a celebration tonight,” said DeVoe. “First off, we would like to thank our Lord and Savior Jesus Christ right now, y’all can’t understand 30 -plus years in the music industry that will chew you up and spit you out.  All six of us are standing on this stage right now, what an amazing thing.”

“Come November, we are going to hit everybody’s city, we are coming to a city near you soon. New Edition—it’s going to be a family affair,” he said.

New Edition member Bobby Brown gave thanks to the group’s fans and talked about the success the group has acquired overtime.

Brown reflected, “For thirty-five years, y’all have been our backbone. Y’all have been there for us through thick and thin and I know I been through some shit so thank you for sticking with me.”

Member Ricky Bell wrapped up the group’s speech by describing his overall experience in New Edition as a roller coaster ride.

“I want to thank all of the parents out there for introducing your kids to New Edition and to this new generation, we really appreciate that,” said Bell.