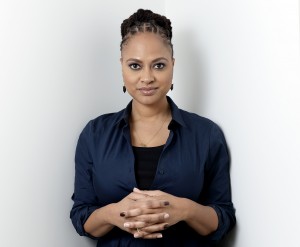 On Thursday, December 10, a group of actors, film enthusiasts and fans gathered at the REDCAT Theater in downtown Los Angeles to discuss Black artistry and diversity in films with critically acclaimed director Ava Duvernay for the ARRAY at The Broad series.

Guests were treated to a screening of the iconic 1960s film Paris Blues, starring Sydney Poitier and Diahann Carroll and afterwards, they participated in a panel discussion with Duvernay, singer Ledisi, Creed director Ryan Coogler, and actress Tessa Thompson.

The event was put on by Duvernay’s organization, ARRAY, an independent film and resource collective that focuses on the support of independent films by people of color and women.

“Two years we’ve been working on this,” Duvernay said. “Tonight we had our first experience at the Broad, which was a very rarely seen film, a beautiful film called ‘Paris Blues’.”

Fresh off of the success of his film Creed, Coogler talked at length about his blackness and his artistry with the audience.

“I’ve come to a place where I realize and appreciate that being a Black artist is a gift from God,” Coogler said.

The film, which chronicled the love affairs of two American girls in Paris, dealt with topics like interracial relationships, Civil Rights issues and international attitudes towards race, also sparked discussion from the panelists and audience members.

“I get conflicted because it felt like a very contemporary film when obviously it’s a classic,” said New Orleans native Davida Chanel.

The movie, at its core, is a love story; however the positive relationship between Carroll and Poitier was a reminder to many in the audience that when it comes to Black love, on camera exmaples are few and far between.

“You see how rare it is to have those kinds of depictions,” Duvernay said.

Friday’s event was the first screening series in ARRAY’S collaboration at The Broad museum. Screenings are set to occur bi-monthly, with a panel discussion immediately following.

For more information on ARRAY at The Broad visit http://www.arraynow.com/array-at-the-broad/.