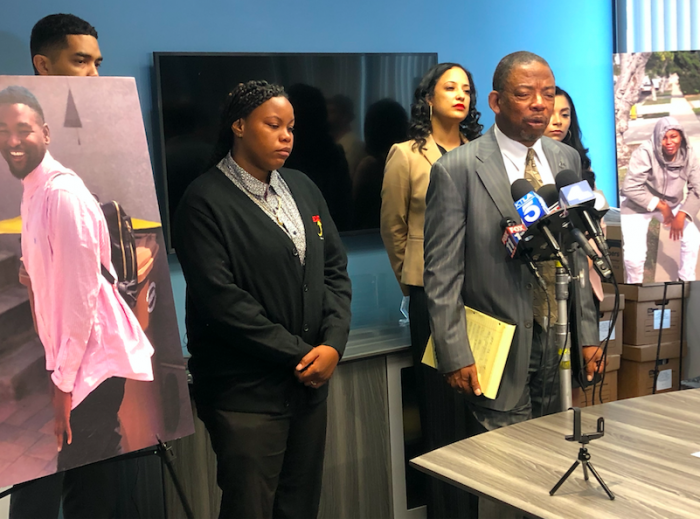 “We are alleging that Walgreens, the largest pharmaceutical retailer in the world is responsible for the tragic death of 21-year-old Jonathan Hart,” said attorney Carl Douglas. “They are responsible even though it’s clear that Donald Ciota fired the fatal shot striking Jonathan once in the back of the neck.  Walgreens is responsible even though Donald Ciota was hired by American Protection Group which was hired by S.E.B. Security Services. Walgreens is responsible for the death of Jonathan Hart because of the despicable choices that they made to place profits over safety. Walgreens owns and operates more than 9,500 retail stores in the United States. Over 640 retails stores in California and over 54 stores in Los Angeles County, but the lawsuit alleges that in their senseless pursuit of profits over the safety of its millions of customers, Walgreens has chosen to despicably place armed security guards in several of its stores.”

Douglas went on to explain that Walgreens only places armed guards at stores in predominantly Black and Latino neighborhoods in Los Angeles County.

“I really miss my brother,” cried Psykyssyanna Hart the twin sister of Jonathan. “Everyday I have to look at this necklace and carry him around and I don’t want him in this position.  I want him here. Our birthday passed–the first birthday without him and I wouldn’t wish this on anybody.”

whether or not he was shoplifting.  Hart was shot in the neck from behind. Ciota currently faces one count of murder with an allegation that he used a firearm as a deadly and dangerous weapon.

“We intend to fight to the finish to make sure that the life and death of Jonathan Hart will not have been in vain,” added Douglas.  “That the pain that this young woman feels will not have to be felt by another family member.”