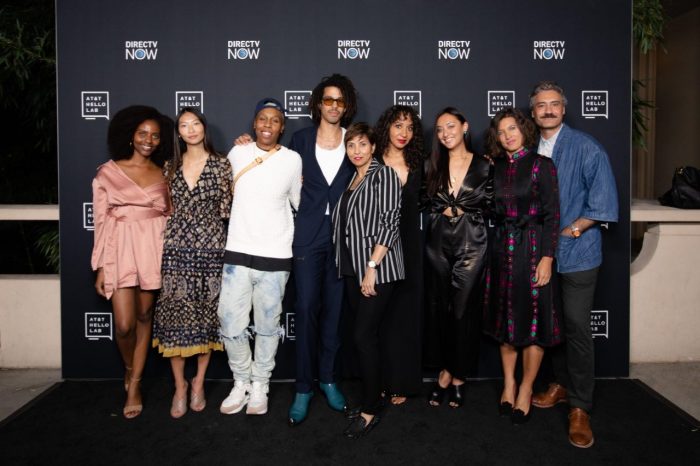 Hello Lab is a program through AT&T that gives up-and-coming filmmakers the chance to be mentored by entertainment industry leaders, including Common, Lena Waithe, Tessa Thompson, Rachel Morrison, Taika Waititi, Cary Fukunaga and Shelby Stone. The goal of the program is to show stories from underrepresented communities, spanning across race, sexuality, mental health and more. Along with mentorship, the filmmakers are provided with resources including writers, actors, script development, production and more.

“It’s this incredible program, in partnership with Full Screen and AT&T, that pairs really incredible filmmakers with amazing mentors who help bring their signature work to life,” said Brickson Diamond, co-founder of the Blackhouse Foundation, a partner of Hello Lab. “It’s our second year doing Hello Lab so there are returning mentors, like Common, but we also have some new mentors like Tessa, Rachel, Taika and Lena. We have these mentors, not just because they’re hot, which of course they are, but also because they’re ready to give back.”

Each between 10 and 20 minutes, the films tackled an array of issues. One film, by Tazbah Rose Chavez, was about a Native American young woman who goes through the day having to explain her culture and the pronunciation of her name. Sean King, who was mentored by Lena Waithe, created a film about mental health. It showed Black women of different age groups and mental states as they live in a mental health facility. There was also a film by Melisa Resch, who was mentored by Common. It focused on two women who fall in love while fighting against protesters at an abortion clinic. Along with the love story, it shows the difficulties some women face with abortion rights.

“They wanted us to tell personal stories, so I showed a story based on my life,” said Melisa Resch, who was mentored by Common. “For people of color, queer people, women; our lives are full of contradictions, joy, and pain and I wanted to show all of that.”

Constance Tsang directed a film where a group of coworkers from a Law Firm go on a retreat. The main character is the only Asian and one of the only women.  It becomes a thriller as everyone is given guns to go out hunting. Chelsea Winstanley, mentored by Tessa Thompson, focused on the Muslim Culture in the Middle East. In her film, an openly gay man deals with the struggle of being romantically involved with a man who is married to a woman and hiding that he is attracted to men.

The night was filled with socializing as well. Before and after the film screenings, AT&T Hello Lab had mixers and a red carpet going on outside. The filmmakers, mentors, actors, family and friends mingled with one another over complementary wine and hors d’oeuvres. As the culmination of the Hello Lab Mentorship Program, it was a night full of fun, entertainment and depth.

“It’s a blessing that we can network and meet all types of people with different perspectives. You don’t see this type of crowd all the time, so I like it. I think that it’s important that we come together, listen to each other, and help people to showcase their work publicly,” said Morgan Conigland, who came out to support a friend in the film.

DirectTV was also a partner, giving an outlet for people to watch at home on their Hollo Lab channel and DirectTV NOW. For more information on AT&T Hello Lab, visit them on Twitter @ATTHelloLab.