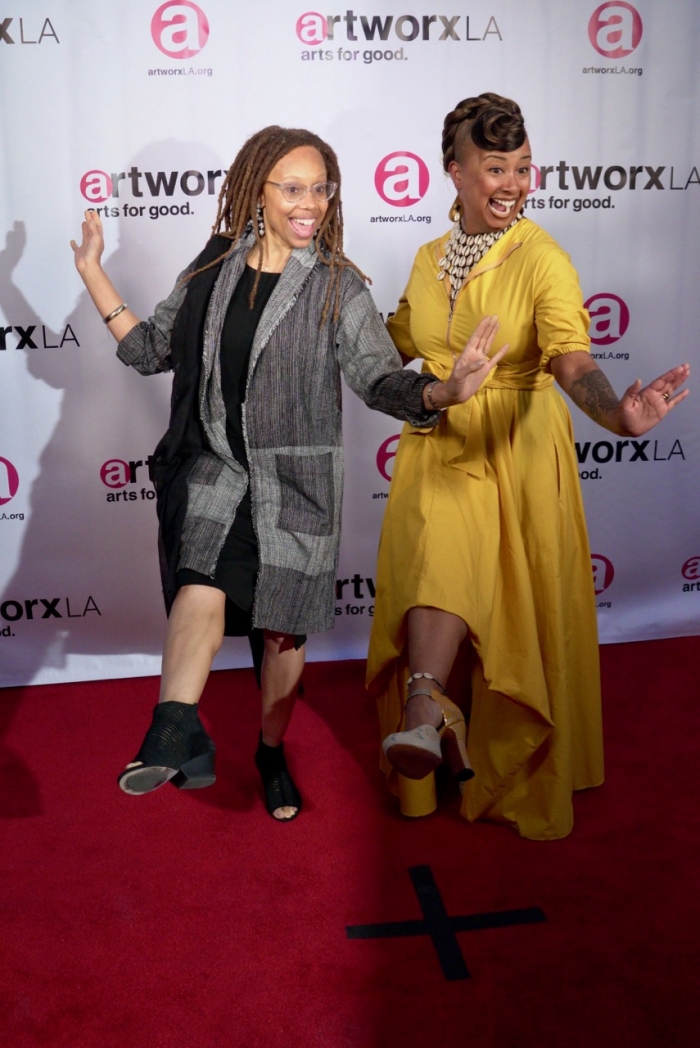 Kristin Sakoda, Executive Director of the Los Angeles County Arts Commission, was an honoree at the 2019 artworxLA gala, with artworxLA Executive Director Shelby Williams-Gonzalez. The organization celebrated its 27th year with its annual “An Evening of Art” gala on Thursday, May 2, 2018, at the Taglyan Cultural Center, as well as with a series of public events showcasing the work of its students. (Photo by Chris Devlin)

artworxLA, the L.A.-based educational organization dedicated to combatting the high school dropout rate via engagement of alternative high school students with a long-term program focused on arts education in the classroom and mentorship, celebrated their 27th year with its annual “An Evening of Art” fundraising gala at the Taglyan Cultural Center.

Founded in 1992 with just one partner school site, artworxLA currently has a weekly presence in 33 alternative education classrooms throughout LA County.  artworxLA students may pursue a variety of creative disciplines, from fine arts to filmmaking to the recording industry, with teaching artists and entertainment industry mentors helping students develop the skills and connections that lead to creative careers.

Over the past 27 years, artworxLA has worked with 12,000 students at over 50 alternative education sites in eight school districts. Among the cultural institutions who have partnered with the organization are the Getty Museum, LACMA, the Japanese American National Museum, the Autry Museum of the American West, the Los Angeles Public Library and the Hammer Museum. artworxLA students have received scholarships at the top arts colleges in the area; and in conjunction with the Los Angeles Unified School District, in October, 2018, has also established the Design + Media Arts Academy, Los Angeles’ premier alternative education arts academy.

This year, the non-profit’s annual fundraising gala honored Kristin Sakoda, Executive Director of the Los Angeles County Arts Commission, where her work focuses on making the arts more equitable, diverse and inclusive through education, civic art, research, as well as via funding and grants. In all, the commission provides funding for over 350 arts nonprofits and runs the nation’s biggest internship program. Previously, Ms. Sakoda served as deputy commissioner and general counsel at the New York City Department of Cultural Affairs.

Fellow 2019 honoree Michael Sugar is the founder and CEO of Sugar23, a global marketing, management, and production company. He was awarded the Oscar for Best Picture for “Spotlight,” starring Mark Ruffalo, Michael Keaton, and Rachel McAdams. Sugar’s most recent credits include the high-profile Netflix series “Maniac,” with Cary Fukunaga directing and Emma Stone, Jonah Hill, and Justin Theroux starring, which premiered last September; as well as the recently released “I Am The Night” at TNT with Chris Pine starring and Patty Jenkins directing.   He is an Executive Producer on the Netflix series “The OA,” co-created by Zal Batmanglij and client Brit Marling, who also stars, as well as the hit Netflix series “13 Reasons Why,” created by Brian Yorkey and directed by Tom McCarthy, both in their second seasons. Sugar’s impressive roster of literary and talent clients includes Steven Soderbergh, Richard Linklater, Cary Fukunaga, Marc Webb, Patty Jenkins, George Stroumboulopoulos and Robin Wright, among others.

“We are thrilled to celebrate Kristin Sakoda for her expansive career as an arts advocate and leader, ensuring that the arts are accessible for all LA County residents. And to Michael Sugar, thank you for telling stories that spark conversations in our communities and remind us that there is always room to do better,” stated Shelby Williams-Gonzalez, executive director of artworxLA, adding, “both Kristin and Michael exemplify the power of the arts to educate, engage and empower young people and communities at large.”

Both the 2019 honorees are avid advocates of creative youth development and career pathways for young people.

Far surpassing its stated mission of reducing the dropout rate, artworxLA alumni have also successfully pursued careers in the arts: publishing photography, launching creative businesses, working as professional artists assistants, receiving certification in creative software and pursing college art degrees. Many artworxLA alumni have also returned to give back to the organization, offering advice and mentoring to current students.

Three remarkable artworxLA student’s stories were presented in the fourth installment of the artworxLA Little Docs short film series, which premiered at the Annual Evening of Art on May 2nd. Every spring, three artworxLA teens spend a day with a professional filmmaker, sharing their lives, neighborhoods, creative processes and the role of artworxLA in their new outlooks.  Little Docs Season 4 film directors include Erica Eng, Andrew Gallo, and Ze’ev Waismann.