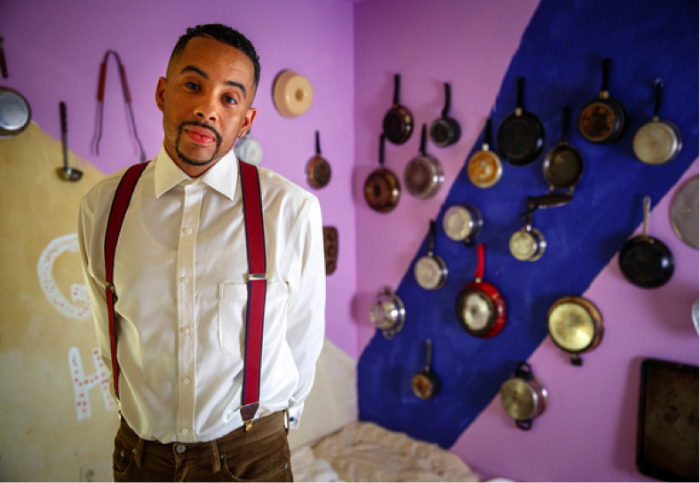 Artist and activist, Ise Lyfe aims to bring awareness to the juvenile justice system with art as his vehicle of choice. His justice exhibit, smallasaGIANT, is a photography project and exhibition that tells the personal, familial, communal, and historic story of young people that have been sentenced to over 20 years in prison when they were under the age of 18.

“Through video, photography and written narratives, smallasaGIANT will showcase the stories, struggles, and in the victorious moments of this collective discourse, the triumphs and release of over fifty people, who are serving or have served long-term sentences in California’s correctional system,” said Lyfe.

Lyfe is an award-winning social entrepreneur, artist, justice advocate, professor, and product developer from Oakland, CA, who lives in Los Angeles. He is the executive director of Lyfe Productives, a California-based product development firm with a client portfolio that includes Kaiser Permanente, Los Angeles Department of Transportation, The National Fair Housing Alliance, University of California Regents, Comedy Central, Los Angeles Department of Transportation, The California Endowment, and Deloitte. He shared a little bit about how he was influenced by art, some of his early exposure and about his art style.

“My exposure to contemporary art came in my teens when I’d escape the neighborhood and walk through the then, foreign to me, museums in San Francisco, just across the bridge from where I grew up in Oakland,” said Lyfe.

He continued, “I imagine some of the first art I was exposed to was the great literary works of famed Black writers of the early 20th Century.

“My style as an artist is inspired by voids—I try to fill the spaces left empty with content and perspective that speaks to disparity and hope.

“I enjoy building out the parts that still may be going unseen—SmallasaGIANT is full of that.”

The exhibit highlights the ills within the juvenile justice system in hopes to charge California’s advocacy communities for national resistance against mass incarceration. It features over fifty current and formerly incarcerated people that were sentenced to adult terms before they were adults.

“SmallasaGIANT is a tangible tool that, through conceptual art, can be used to empower communities and influence politicians and stakeholders to create change in our juvenile justice system,” said Lyfe.

“Each year, more than 250,000 youth in the United States, primarily youth of color, are tried, prosecuted and convicted as adults – and their punishments are far worse.

“The notion of rehabilitation and reform has been completely pushed to the back-burner. In California, over 6,500 youth offenders are incarcerated and more than 5,000 are serving sentences over 10 years.”

In November 2018, The California Endowment announced its partnership with Lyfe to launch the juvenile justice exhibit statewide. Starting this year, smallasaGIANT will travel to seven different regions in California, including Oakland, Los Angeles, and Mall the Central Valley. Project leadership has affirmed that the project is confirmed to show at the esteemed research and art institution Museum of Anthropology in San Bernardino, Coachella Valley Arts Center, and other premier venues in Los Angeles, Sacramento, and the Bay Area.

“The only way to change the system is to continue to galvanize attention around the ineffectiveness of our juvenile justice system and help mobilize our communities to help change policy and practice,” said Lyfe.

“This is the ultimate goal of smallasaGIANT.”

One thing is clear, Lyfe’s project will bring attention and garner more conversation on youth in prison and the laws that put them there. He ultimately hopes that the spark lit by his exhibition will lead to a positive change in a cracked system.