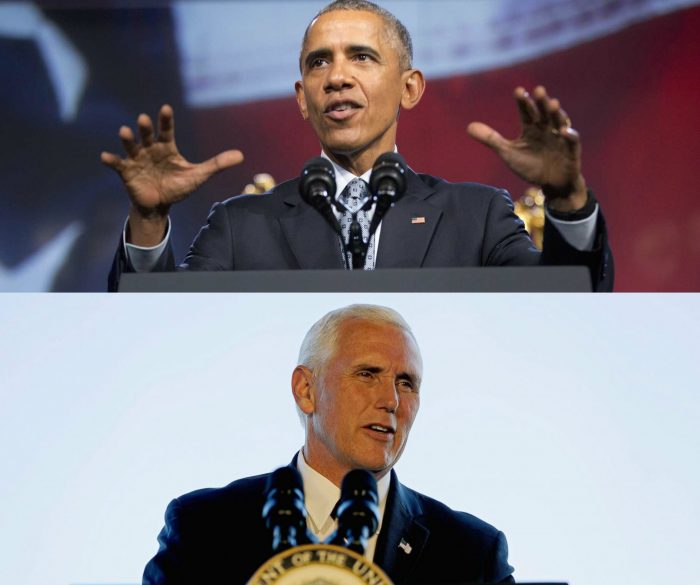 The Trump administration is leaving out half the equation when it argues President Barack Obama’s health care law is in a “death spiral.”

Vice President Mike Pence offered accurate but only partial statistics when he made that case Tuesday in remarks to federal health employees.

“Back when Obamacare was first passed, just over seven years ago, the Congressional Budget Office estimated that 23 million Americans would be covered by now,” Pence told Health and Human Services Department workers. “That’s the blue line on the far left,” he added, referring to a chart. “It quickly became apparent that this was farfetched — to put it mildly.”

True, only 10.3 million people are enrolled this year in the subsidized health insurance markets, not the 23 million projected by the budget office for 2017.

But Pence — and the chart — omitted any mention of the other major coverage arm of Obama’s law, a Medicaid expansion estimated to cover 12 million low-income people this year. More would be covered, but 19 states have refused the expansion because of opposition from Republicans.

Together, the Medicaid expansion and subsidized private health insurance have reduced the number of uninsured by about 20 million people, bringing the uninsured rate to a historic low of about 9 percent, according to the government.

Republican legislation that’s before Congress would phase out enhanced federal financing for Medicaid expansion and trim subsidies for private insurance. Progress reducing the number of uninsured could be lost.

To be sure, subsidized private insurance markets like HealthCare.gov have serious problems in many states. Premiums have gone up sharply and some major insurers have pulled out. About one-third of U.S. counties currently have only one insurer in the subsidized markets.

Next year areas of Washington state, Ohio and Missouri face having no participating carrier, unless other insurers step in. More states could find themselves in that predicament. In other states, officials say the markets are working reasonably well.

Pence is not alone in the administration in emphasizing the underperformance of the subsidized markets while glossing over how the Medicaid expansion has contributed to the decline in the uninsured.

The administration shares some of the blame for the market turmoil. Insurers have complained that the failure of the White House to send a clear signal on the future of $7 billion in subsidies is driving up premiums and undermining confidence. Those cost-sharing subsidies help insurers reduce deductibles and copayments for people of modest incomes.

If Obamacare ultimately goes into a death spiral, the Trump administration’s dismissive approach will be seen by many as part of the reason.