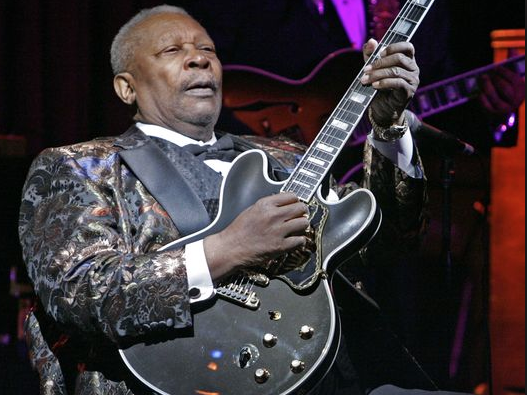 B.B. King, born Riley B. King, was one of the most influential and celebrated blues musicians of all time. From his roots as a sharecropper’s son, working in the cotton fields of Mississippi, he rose to become a living legend — the most renowned blues singer, songwriter, musician, and record producer of the past 40 years — earning the moniker ‘King of the Blues’. King’s story of struggle and triumph is chronicled in American Masters: B.B. King: The Life of Riley, premiering nationwide during Black History Month on Friday, February 12 at 9 p.m. (ET) on PBS (check local listing). Academy Award winner Morgan Freeman narrates and appears in the film.

Made with the full cooperation of The B.B. King Museum and Delta Interpretive Center in Indianola, Mississippi, B.B. King: The Life of Riley was filmed in locations across America, as well as the United Kingdom. Award-winning Producer/Director Jon Brewer worked on the film with King for two years. Filming was completed shortly before King passed on May 14, 2015.

Born September 16, 1925 on a plantation in Itta Bena, Mississippi, near Indianola, King was raised by his maternal grandmother, Elnora Farr in nearby Kilmichael. After she died, his father brought him to live in Lexington. There, for the first time, King experienced segregation. A mob hung a black boy and dragged him behind a car to the courthouse in Lexington. King witnessed the boy being dragged; it was an image he would never forget. Like so many blacks of his generation, King was subjected to bigotry, racism, hatred and denial. But he never allowed it to destroy his spirit or his music.

King candidly reminisces about memorable people in his life such as preacher Archie Fair, the first person he heard play an electric guitar; cousin Bukka White, who taught him about being a blues singer; the musical influence of bluesman T-Bone Walker and French jazz guitarist Django Reinhardt; his stint as a disc jockey where his radio names (Beale Street Blues Boy and Blues Boy King) were eventually shortened to B.B. King; and how and why he came to name his guitars Lucille. A bittersweet moment in the film is King’s reflection on marriage. King had two wives, Martha Lee Denton, and then Sue Carol Hall. The failures of each marriage were attributed to King’s relentless touring schedule.

Rare archival footage is interspersed throughout the film, including his 1968 performance at Bill Graham’s Fillmore West where he was billed with some of the hottest rock stars, who idolized him and helped to introduce him to a young white audience.

Among the highlights from the film is footage of King’s collaboration with Bono, where King reveals that he “does not do chords,” and the story behind King and Eric Clapton’s recording of Riding with the King. Though he made an exception for Clapton, King admits he doesn’t like to play acoustic guitar.

The ‘King of Blues,’ who delighted audiences around the world with such classic R&B hits as Three O’ Clock Blues, Paying The Cost To Be The Boss, Every Day I Have The Blues, and of course his most popular cross over hit, The Thrill Is Gone, died at age 89. The city of Memphis, where he had performed so many times, held a funeral procession for him down Beale Street, with a brass band marching in front of the hearse, playing When the Saints Go Marching In.

“Play the best that I can. Reach as many people as you can, as many countries,” says King. “In other words, I’d like the whole world to be able to hear B.B. King sing and play the blues.”

“B.B. King became America’s most recognizable and influential blues musician,” says Michael Kantor, executive producer of American Masters. “The thrill isn’t really gone yet – I think anyone who sees this film will be thrilled and inspired by this legendary artist.”

Launched in 1986, American Masters has earned 28 Emmy Awards – including 10 for Outstanding Non-Fiction Series since 1999 and five for Outstanding Non-Fiction Special – 12 Peabodys, an Oscar, three Grammys, two Producers Guild Awards and many other honors. Now in its 30th season on PBS, the series is a production of THIRTEEN PRODUCTIONS LLC for WNET and also seen on the WORLD channel.

To take American Masters beyond the television broadcast and further explore the themes, stories and personalities of masters past and present, the series’ companion website (http://pbs.org/americanmasters) offers streaming video of select films, interviews, photos, outtakes, essays and more.