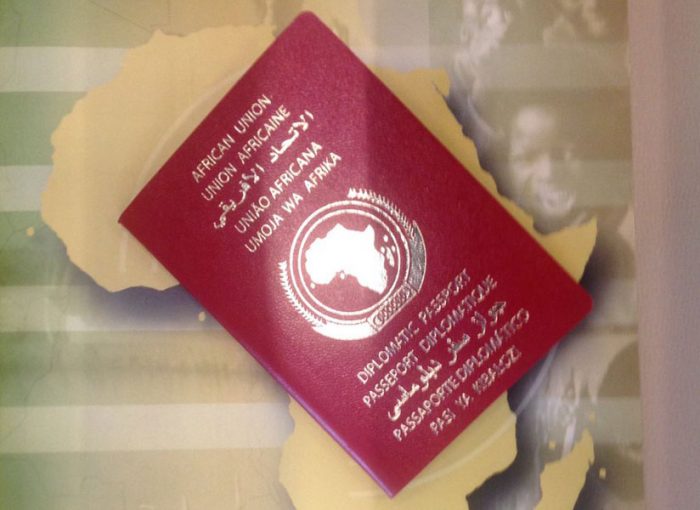 July 18, 2016 (GIN) – National leaders at the African Union summit held in Kigali, Rwanda, last week were presented with a prototype of the long-awaited Pan-African passport.

“We’ve been overwhelmed by requests and enquiries of other ministers, officials and African citizens to share in this privilege of holding an African passport,” said AU Commissioner Nkosazana Dlamini-Zuma.

It is hoped that the new document will facilitate the seamless mobility of Africans and ease trade across the continent, consequently leading to the continent’s economic transformation.

The passport seeks to create advantageous visa-regimes across the continent and create a pathway for a visa-free Africa, under the AU agenda of the “African We Want”.

Meanwhile, as in the U.S. where parties squabble over their presumptive presidential candidates, the African Union summit meeting in Kigali was also in disarray, unable to agree on a new commissioner to replace outgoing chair Madame Nkosazana Dlamini-Zuma.

The ECOWAS bloc of west African states was said to be unhappy with the choice of candidates offered to succeed Ms. Dlamini-Zuma who agreed to remain in the post for the next six months.

At least two of the three home countries of the prospective candidates have troubling human rights records. To a journalist’s question regarding their democratic credentials, Vincent Nmehielle, the AU legal counsel responded: “Can you define democracy for me? When you say candidates from undemocratic countries I do not know what you mean. They are members of the African Union. To be a candidate it is open to all members of the African Union.”

Member states also took a slap at the International Criminal Court (ICC) which had demanded the arrest of Sudanese president Omar al-Bashir during his stay in Kigali for the summit. Rwanda rejected the demand, saying the country has “no obligation” and “no right to arrest anybody as (Rwanda) has not signed the Rome Treaty” which established the court – the world’s first and only permanent international court to prosecute war crimes, crimes against humanity and genocide.

Finally, the African Union backed a request from the Intergovernmental Authority on Development (IGAD) for African troops with a mandate to reinforce U.N. peacekeepers in South Sudan. The request now goes to the U.N. Security Council. The government of South Sudan, however, has said it does not want more foreign troops in the country.

A decision was also taken to set up a counter-terrorism fund to which African countries would make voluntary contributions.