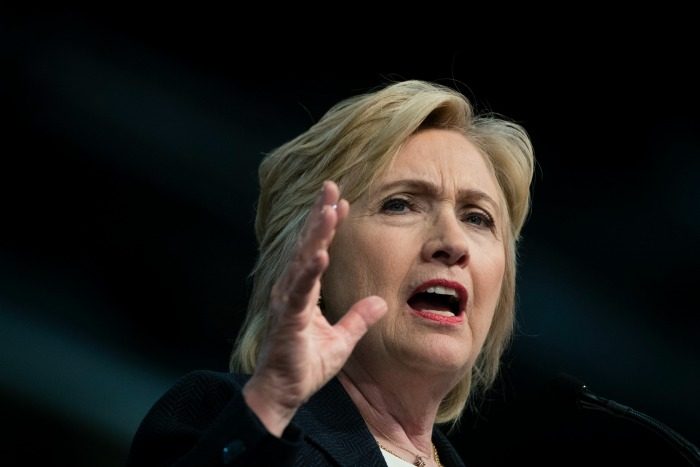 Democrats attending their party’s  convention last week in Philadelphia were moved to tears, rounds of applause and a standing ovation when nine mothers of Black men slain by police brutality and racially motivated attacks took the stage.

“The majority of police officers are good people doing a good job,” said Lucia McBath, the mother of 17-year-old Jordan Davis, who was killed by Michael Dunn, a 45-year-old White male in Jacksonville, Fla.,  after a tense argument at a gas station.

“We’re going to keep using our voices and our votes to support leaders like Hillary Clinton, who will help us protect one another so that this club of heartbroken mothers stops growing,” said  Mcbath.   The mothers of Trayvon Martin, Eric Garner, Sandra Bland, Michael Brown and other men and women who were killed by police or died from gun violence joined McBath  on stage.

Many who attended the convention or watched that heartfelt moment around the country at home viewed the inclusion of “the mothers of the movement” as a signal that the Democratic party is taking the concerns of the Black Lives Matter (BLM) movement seriously.

But for some that emotional moment on television was just political theater – too simple a gesture with little or no real or lasting impact.

He and other activists recently  launched the “I Ain’t Voting” campaign to express their anger at the Democratic Party, threatening to persuade Blacks to not vote in 2016.

Black Americans, he says, have a rare chance right now  to collectively demand action from the  Democratic Party –  or at least insist that some of their priorities be included in the party’s 2016 platform  or future policy plans.

“Hey, if you don’t give us criminal justice reform, we’ll give the country to Donald Trump. That’ll send the Democrats into a frenzy. Black lives will matter then, I guarantee you,” said Newsome in an interview with the BBC.

Newsome is not the first to call for African Americans to withhold their votes. Political pundit Tavis Smiley has suggested numerous times that Black Americans should sit out an election to get the Democrats’ attention.

Other activists view the idea of Blacks not voting – or boycotting the 2016 elections in particular – differently.

Dr. Melina Abdullah, for example, who is one of the founders of Black Lives Matter, admits she supports neither Clinton nor Trump. She describes the standard bearers of the two major parties as “corporate candidates” whose positions on issues can be influenced by powerful meg- donors.

She says the BLM movement does not plan to endorse either candidate. If Clinton is the eventual winner of the presidential election, though, she says BLM will continue to demand she pushes for  police reforms.

Unlike Newsome, Abdullah is urging African Americans to get out and vote in November.

“A lot of Black folk say people died for this,” said Abdullah, who is also  professor of Pan-African studies at California State University Los Angeles. “It (voting) is a way of honoring my ancestors.”

Although Abdullah says she respects the right of people who chose to sit out, she plans to cast her vote in November and says she also votes in every election.

“It’s the height of political naivety,” said Hutchinson. “The stakes are far too high for that kind of pox-on-both-of-your-houses attitude.”

Black Americans vote overwhelmingly for Democratic candidates. If many of them don’t turn out on Election Day – especially in states that have a tendency to vote either Republican or Democrat  like Virginia, Pennsylvania, Ohio and North Carolina – that could greatly affect Clinton’s chance of winning.

Hutchinson said that instead of sitting out the election, Black voters should get engaged and lobby politicians to take action.

“The better strategy is to organize, educate, and mobilize among young persons about the importance of political engagement to pressure the Dems, local elected officials, and others for police and criminal justice reform,” Hutchinson said. “That can’t happen if you disengage from the process.”

Whether they support the possibility of an African-American boycott of the 2016 elections or not, most Black political activists are extremely critical of Trump and at least ambivalent about a Clinton presidency.

Abdullah calls the billionaire businessman “oppressive on every level.”

“He’s a raving lunatic, fascist and a blatant racist,” she describe Trump.

But she is no fan of Clinton’s either. She described the first female nominee of a major political party in the United States a “war hawk” and pointed out that  Clinton supported domestic policies that expanded the criminalization of Black men and spurred the growth of  the prison industrial complex.

Hutchison says there are more than enough valid criticisms of both candidates to go around, but sitting out the 2016 election is not a beneficial move.

He warned BLM activists about the dangers of boycotting the 2016 election and handing victory to Trump.

“A Trump win will mean stepped up repression of BLM by police forces emboldened by a Trump win, fewer protests, more arrests and convictions,” Hutchinson said. “However, remember BLM is hardly the only or first to organize, mobilize, and make demands for police reform and accountability. That fight has been waged by civil rights groups from the NAACP to my group and civil rights activists for years and will continue.”