The sounds of James Brown filled Crenshaw Boulevard at the 12th Annual Taste of Soul (TOS), the largest street festival in Los Angeles, on Saturday, Oct. 21. Over 300,000 people gathered to experience world-class musical performances, services offered  from home improvement to voter registration and of course a whole lot of food.

“It’s just a great time when you see Black folk strolling on the ‘Shaw’,” said Danny Bakewell Sr., founder of the TOS. “It’s a peaceful atmosphere; what better way to enjoy your community than that?”

TOS provides business owners with an opportunity for economic growth, selling their goods to the community. It also affords a platform for young musicians, like the Connect Band, to showcase their talent in front of a large audience. Festivalgoers situated chairs, tents, and umbrellas in front of the Wave stage hours before the band took the stage.

“There was so much energy for it to be so early in the morning,” observed actor Richard Brooks, who introduced the trio of young musicians, who came together three short years ago. Last year, the Connect Band was the designated house band for the StarQuest Stage. This year, the band leveled up as the opening act on the main stage. With one of their members still in high school, the trio said it was an honor to be performing on the same stage as some of their inspirations.

Chosen Gospel Recovery Ministry was the second performance blessing festivalgoers with sweet spiritual hymns. The group spoke about a higher purpose than simply singing the gospel. 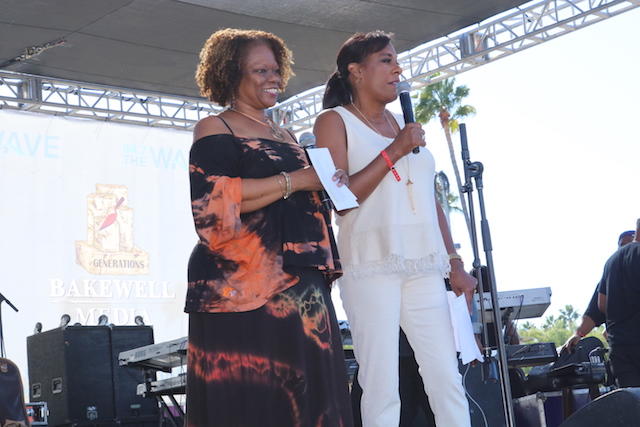 “We do outreach, reach people who are suffering from homelessness, domestic violence, substance abuse, mental illness,” said Pastor Darlene Watley, founder of Chosen Gospel. “We’ve grown to be an organization, a church [Faithful Zion First Fruits Ministry] and the ministry.”

As TOS has expanded and grown, so has its sponsorship and partners. Airbnb was one of the returning sponsors seen on the back of every official TOS shirt.

“You can buy tickets to big stadium shows but that’s not what we’re about,” said John Choi, Airbnb Southern California Policy Manager. “We’re about unique experiences that feature up- and-coming artists, really creating that sort of atmosphere that’s really special.”

“We are really blessed to have people who embrace the vision, because they know the community embraces the vision,” said Bakewell Sr. 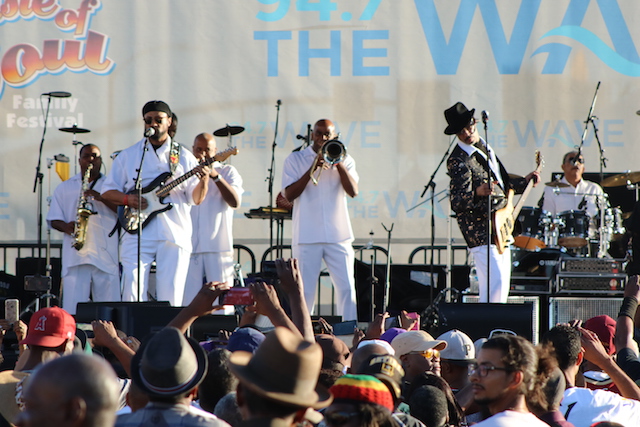 Ohio Players perform on the 94.7 The WAVE Stage at the 12th Annual Taste of Soul. (Photo Credit : Los Angeles Sentinel)

Deputy Mayor Shockley took that time to announce a joint effort with TOS to address homelessness in the county of Los Angeles. The two entities have launched a hygiene drive to provide resources like shampoo, conditioner, soap, lotion, socks and underwear to the unsheltered population as the Black population remains the largest racial/ethnic group of homeless people in Los Angeles.

“If you want to be with the Black community, you can’t help but be with the Taste of Soul,” Bakewell Sr. remarked.  “Our Taste of Soul app really helped the community to navigate throughout the various concerts and offerings of the festival.”

The Wave has been a partner of the festival since its inception. The Wave morning show host, Pat Prescott, and CBS LA news anchor, Pat Harvey, co-emceed the main stage as the “Pat Pat show”.

“You sit in that studio and you talk to the listeners every day, but it’s at events like this that you get to meet them face-to-face, and I enjoy that,” Prescott said.

Similar to Prescott, the leader of the Ohio Players, Diamond Williams, emphasized the importance of interacting with the community. 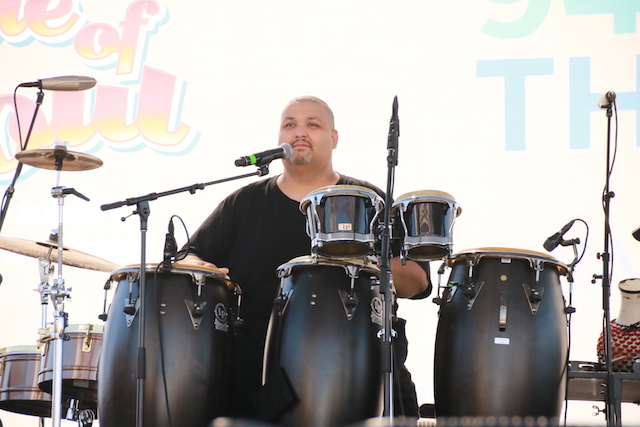 “On Tour” performs on the 94.7 The WAVE Stage at the 12th Annual Taste of Soul. (Photo Credit: Devin Thompkins)

“There’s no comparison when you come back to the people,” said Williams, who has been a drummer with the band since 1972. “Everybody can’t get into an arena, but everyone can get to a free concert.”

Williams has toured with the likes of Marvin Gaye and sold out venues as big as the Hollywood Bowl. He remains steadfast that performing for the people is priceless.

“The numbers are bigger, the entertainment is more exciting,” Williams continued. “We just feel very blessed to be a part of it.”

The Ohio Players brought the sun down as the closing act. The group performed some of their greatest hits including, “Heaven must be like this”. For Bakewell Sr. and the Crenshaw community, the 2017 TOS was very close to divinity. 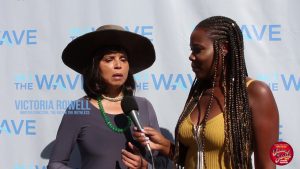 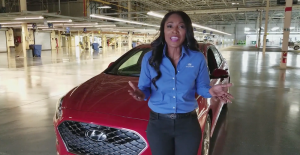 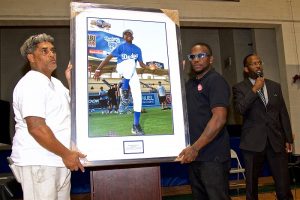