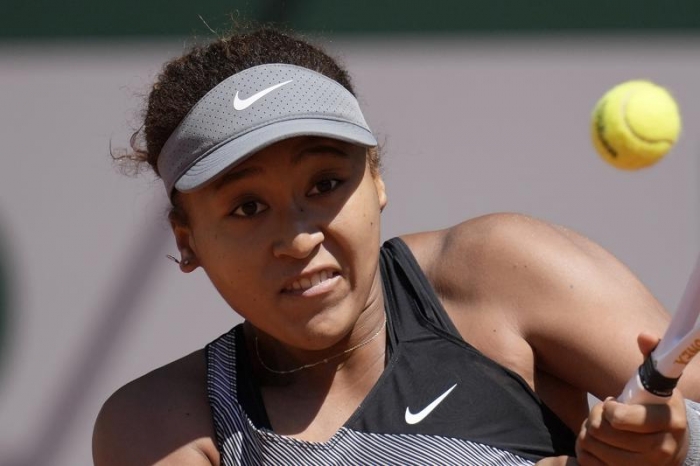 Japan’s Naomi Osaka returns the ball to Romania’s Patricia Maria Tig during their first round match of the French open tennis tournament at the May 30, 2021, (AP Photo/Christophe Ena, File)

Naomi Osaka withdrew from the French Open on Monday and wrote on Twitter that she would be taking a break from competition, a dramatic turn of events for a four-time Grand Slam champion who said she experiences “huge waves of anxiety” before speaking to the media and revealed she has “suffered long bouts of depression.”

Osaka’s agent, Stuart Duguid, confirmed in an email to The Associated Press that the world’s No. 2-ranked tennis player was pulling out before her second-round match at the clay-court tournament in Paris.

The stunning move came a day after Osaka, a 23-year-old who was born in Japan and moved with her family to the U.S. at age 3, was fined $15,000 for skipping the postmatch news conference after her first-round victory at the French Open. She also was threatened by all four Grand Slam tournaments with possible additional punishment, including disqualification or suspension, if she continued with her intention — which Osaka revealed last week on Twitter — to not “do any press during Roland Garros.”

She framed the matter as a mental health issue, saying that it can create self-doubt to have to answer questions after a loss.

“First and foremost we are sorry and sad for Naomi Osaka. The outcome of Naomi withdrawing from Roland Garros is unfortunate,” French tennis federation president Gilles Moretton said Monday. “We wish her the best and the quickest possible recovery. And we look forward to having Naomi in our tournament next year.”

Moretton said the four major tournaments, and the professional tennis tours, “remain very committed to all athletes’ well-being and to continually improving every aspect of players’ experience in our tournament, including with the media, like we always have.”

In Monday’s post, Osaka spoke about dealing with depression since the 2018 U.S. Open, which she won by beating Serena Williams in a final filled with controversy.

“I would never trivialize mental health or use the term lightly,” Osaka wrote, explaining that speaking with the media makes her anxious.

“I think now the best thing for the tournament, the other players and my well-being is that I withdraw so that everyone can get back to focusing on the tennis going on in Paris,” Osaka wrote. “I never wanted to be a distraction and I accept that my timing was not ideal and my message could have been clearer.”

She continued: “Anyone that knows me knows I’m introverted, and anyone that has seen me at the tournaments will notice that I’m often wearing headphones as that helps dull my social anxiety. … I am not a natural public speaker and get huge waves of anxiety before I speak to the world’s media.”

Williams was asked about Osaka on Monday after winning her opening match in the first scheduled night session in French Open history.

“I feel for Naomi. I feel like I wish I could give her a hug because I know what it’s like. … I’ve been in those positions,” Williams said. “We have different personalities, and people are different. Not everyone is the same. I’m thick; other people are thin. Everyone is different and everyone handles things differently. You just have to let her handle it the way she wants to, in the best way she thinks she can, and that’s the only thing I can say. I think she’s doing the best that she can.”

Osaka has never been past the third round on the French Open’s red clay. It takes seven victories to win a Grand Slam title, which she has done four times at hard-court tournaments: the U.S. Open in 2018 and 2020; the Australian Open in 2019 and this February.

“Here in Paris I was already feeling vulnerable and anxious so I thought it was better to exercise self-care and skip the press conferences,” she wrote.

Tennis players are required to attend news conferences if requested to do so. The maximum fine of $20,000 is not a big deal to Osaka, the world’s highest-earning female athlete thanks to endorsement contracts totaling tens of millions of dollars. 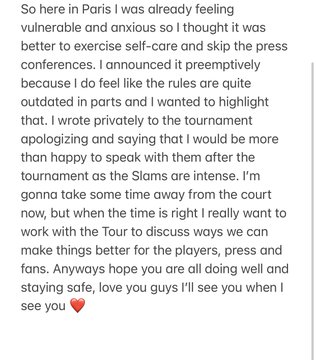 “Mental health and awareness around it is one of the highest priorities to the WTA,” the women’s tennis tour said in a statement emailed by a spokeswoman. “We have invested significant resources, staffing and educational tools in this area for the past 20-plus years and continue to develop our mental health support system for the betterment of the athletes and the organization. We remain here to support and assist Naomi in any way possible and we hope to see her back on the court soon.”

Other players, notably 13-time French Open champion Rafael Nadal and No. 1-ranked Ash Barty, have said they respect Osaka’s right to take a stance but explained that they consider speaking to reporters part of the job.

After Osaka’s post Monday, several athletes in tennis and other sports tweeted their support.

Martina Navratilova, an 18-time Grand Slam champion, wrote: “I am so sad about Naomi Osaka. I truly hope she will be ok. As athletes we are taught to take care of our body, and perhaps the mental & emotional aspect gets short shrift. This is about more than doing or not doing a press conference. Good luck Naomi- we are all pulling for you!”

Two-time NBA MVP Stephen Curry wrote that it was “impressive taking the high road when the powers that be dont protect their own. major respect.” 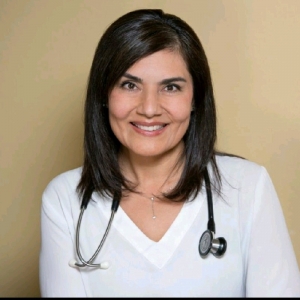 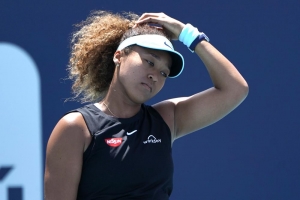 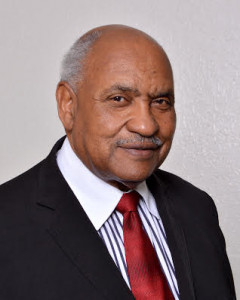 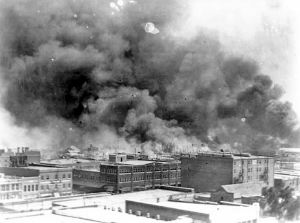 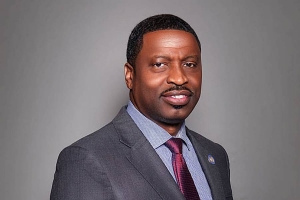