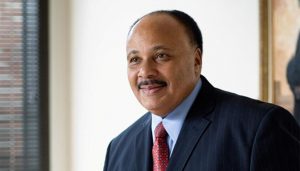 The National Newspaper Publishers Association (NNPA) will honor Martin Luther King, III with the 2017 Lifetime Legacy Award during the group’s annual conference this week (June 20-June24) at the Gaylord Convention Center at the National Harbor in Prince George’s County, Md.

As the oldest son of Dr. Martin Luther King, Jr. and Mrs. Coretta Scott King, Martin Luther King III serves as an ambassador of his parent’s legacy of nonviolent social change. In 1997, Mr. King was elected as the fourth president of the Southern Christian Leadership Conference (SCLC) where he co-sponsored the 40th Anniversary of the historic March on Washington.

Following his service with SCLC, Mr. King founded Realizing the Dream, which focused on redressing poverty by strategizing with community organizers to ignite investment in the local neighborhoods and foster peaceful coexistence within the U.S. and internationally.

Dr. Benjamin F. Chavis, Jr., the president and CEO of the NNPA, said that the group is especially pleased to present the 2017 Lifetime Legacy Award to Martin Luther King III.

On Tuesday, June 20, the NNPA will kick off the conference with the National Black Parents Town Hall Meeting on Educational Excellence featuring radio personality and community activist DJ EZ Street; Hilary Shelton, the director of the NAACP’s Washington Bureau; Dr. Marietta English, the president of the National Alliance of Black School Educators; and Lynn Jennings of Education Trust.

The conference will also feature a panel discussion about the documentary “Pardons of Innocence: The Wilmington Ten”; a conversation with NNPA members who operate publications that are more than 100 years old; and a presentation by the Nissan Foundation on 25 years of community service.

The NNPA will also name the Publisher of the Year during the Merit Awards on Thursday evening.

Dr. Chavis said that support of the NNPA’s partners, sponsors and advertisers is critically important and appreciated.

Denise Rolark Barnes, the chairwoman of the NNPA, said that this year’s conference is a celebration of the Black Press.

“For 190 years, since the first Black newspaper was published on March 16, 1827, Black newspaper publishers have been actively engaged in ending slavery and Jim Crow, fighting against segregation and for civil rights, and galvanizing the electorate that voted for the nation’s first Black president,” said Barnes. “Our collective voices, with well over 200 Black-owned media companies across the U.S. and in the Caribbean, are strong, defiant and determined to be heard.”

Barnes continued: “Despite our struggles, we remain relevant and strong within our communities. We welcome those to this conference who support our work, value our impact and share our belief in an inclusive and diverse country.”

For more information about the conference, please visit www.nnpa-events.com.