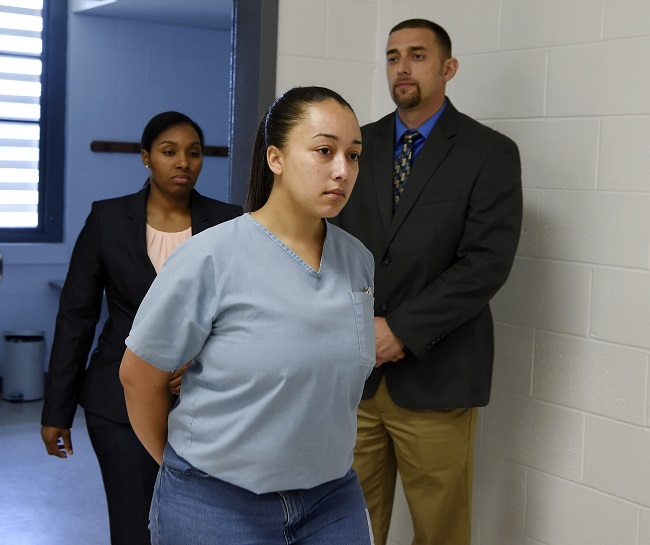 File- This May 23, 2018, file photo shows Cyntoia Brown, entering her clemency hearing at Tennessee Prison for Women in Nashville, Tenn. Tennessee Gov. Bill Haslam on Monday, Jan. 7, 2019, granted executive clemency to Brown, serving a life sentence for murder who says she was a victim of sex trafficking. The outgoing Republican governor, whose term ends in just two weeks, chose to show mercy to the now 30-year-old Brown by releasing her Aug. 7.
(Lacy Atkins /The Tennessean via AP, Pool, File)

A woman who says she was a 16-year-old sex trafficking victim when she killed a man in 2004 was granted clemency Monday by Tennessee’s governor and will be released from prison later this year.

Tennessee Gov. Bill Haslam granted clemency to Cyntoia Brown, who had been serving a life sentence but who will be released on parole on Aug. 7 — 15 years from the date she was first arrested.

“Cyntoia Brown committed, by her own admission, a horrific crime at the age of 16. Yet, imposing a life sentence on a juvenile that would require her to serve at least 51 years before even being eligible for parole consideration is too harsh, especially in light of the extraordinary steps Ms. Brown has taken to rebuild her life,” Haslam said in his statement.

Brown, 30, will remain on parole supervision for ten years on the condition she does not violate any state or federal laws, holds a job, and participates in regular counseling sessions.

Brown’s case has attracted national attention from criminal justice reform advocates, and the attention has amped up as Haslam’s second and final term nears an end. He leaves office Jan. 19.

While law enforcement officials had opposed clemency, arguing Brown was not justified in killing 43-year-old Johnny Allen, celebrities like Kim Kardashian West and singer Rihanna spoke out for Brown. The governor’s office received thousands of phone calls and emails from supporters.

Brown was convicted in 2006 of murdering Allen, a Nashville real estate agent. Police said she shot Allen in the back of the head at close range with a gun she brought to rob him after he picked her up at a Sonic Drive-in fast-food restaurant in Nashville to have sex with her.

Brown’s lawyers contended she was a sex trafficking victim who not only feared for her life but also lacked the mental capability to be culpable in the slaying because she was impaired by her mother’s alcohol use while she was in the womb.

According to court documents, Brown ran away from her adoptive family in Nashville in 2004 and began living with a man known as “Cut Throat” in a hotel, who then forced her to become a prostitute. Court documents say the man verbally, physically and sexually assaulted her.

One night, Allen picked up Brown at a Sonic Drive-In and she agreed to engage in sexual activity for $150. Once at his place, Brown eventually got into Allen’s bed. Brown told law enforcement officials she thought he was reaching for a gun, so she shot him with a handgun from her purse. 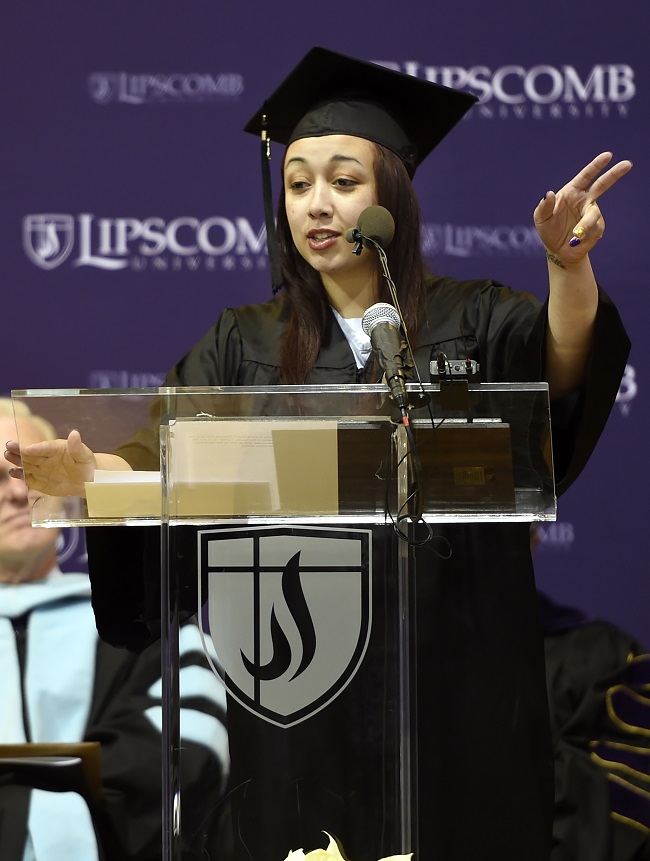 In this Dec. 18, 2015 photo, inmate Cyntoia Brown of the Tennessee Prison for Women delivers a commencement address before receiving her associate degree from Lipscomb University. When Brown was 16 she recieved a life sentence for the murder of Johnny Mitchell Allen. Brown’s life sentence, and the practice of sentencing young people to a lifetime behind bars for even the most heinous of crimes, has drawn increased scrutiny in Tennessee and nationwide. (Ricky Rogers /The Tennessean via AP)

She took two of his guns and his money from his wallet before fleeing the scene.

Brown expressed thanks in a statement released Monday by her legal team.

“I am thankful for all the support, prayers, and encouragement I have received. We truly serve a God of second chances and new beginnings. The Lord has held my hand this whole time and I would have never made it without him,” Brown said. “Let today be a testament to his saving grace.”

The U.S. Supreme Court has ruled against life-without-parole sentences for juveniles. Yet, the state of Tennessee argued successfully in lower courts that it was not in violation of federal law because Brown did have a possibility for parole: She was sentenced to serve at least 51 years of her life sentence.

“We need to see this as a national awakening to change the draconian laws that allow juveniles, children, to be placed in adult prisons when they’re just children. They’re not little adults,” said Houston Gordon, one of Brown’s lead attorneys.

While in prison, Brown completed her GED and took college classes. She is currently one course away from finishing a bachelor’s degree at Lipscomb University.

Haslam’s decision comes at a time when he’s considering his next political move in Tennessee now that U.S. Sen. Lamar Alexander announced he won’t seek re-election in 2020.

Gov.-elect Bill Lee offered a brief statement, saying he “respected” Haslam’s choice in the complex case and Lt. Gov. Randy McNally said he “appreciated” the process the governor went through to arrive at his decision.

Ed Yarbrough, another attorney for Brown, joked at a Monday press conference that he was brought on as the “token Republican” in Brown’s case.

“I have to give a lot of credit to Gov. Haslam for having the wisdom and the compassion to do what he did today,” he said. “It will not be popular with everyone in Tennessee, but he did the right thing and we praise him for that.”

To date, Haslam has granted five commutations, 15 pardons, and one exoneration. The Republican says he is continuing to review and consider additional clemency requests.