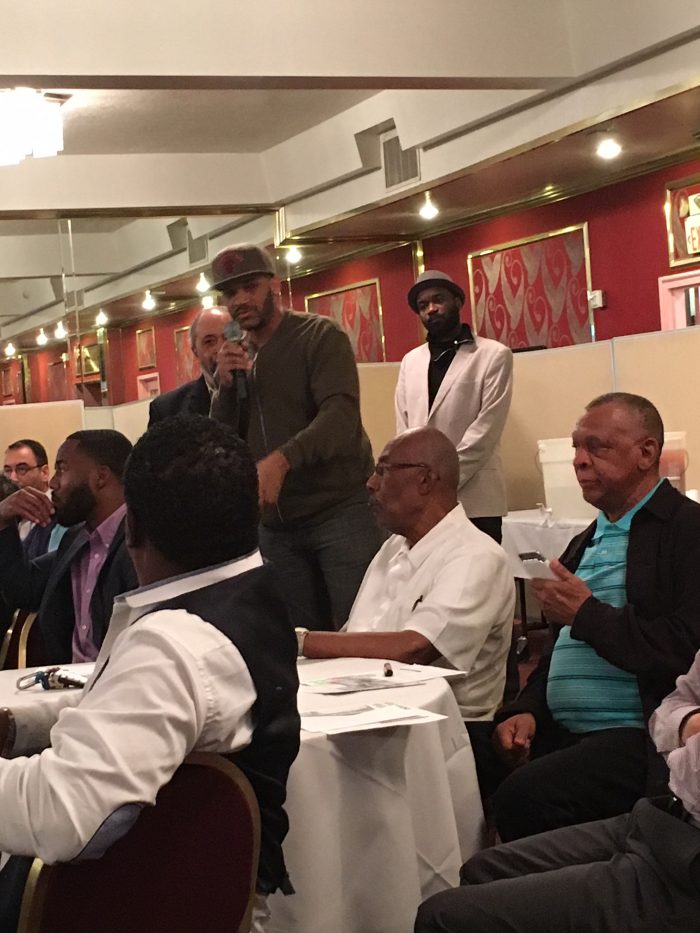 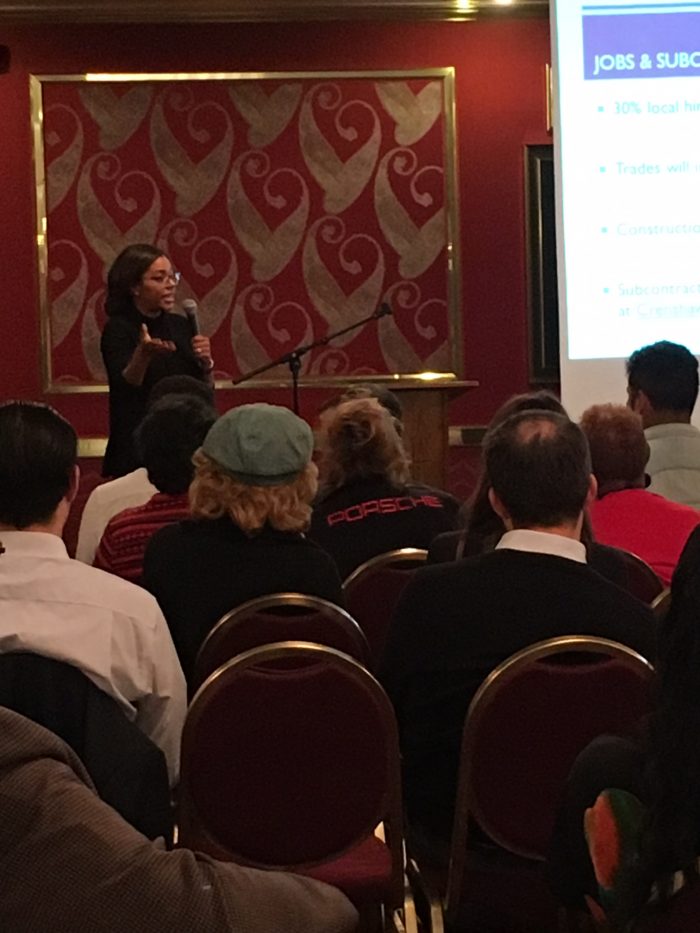 Leading the dialogue was Jamarah Hayner, CEO of JKH Consulting who was hired to work with LA Metro and Watt Companies on the new Metro development on Crenshaw and Expo.

LA Metro and their partners, Watt Companies and West Angeles Community Development Corporation (CDC) lead a spirited yet tough ‘community workshop’ that turned into a town hall meeting with a group of diverse leaders and residents on Thursday at the West Angeles Church Crystal room. As a part of its community mandates set by city and state development laws, this dialogue is a part of a series of dialogues that are continuing to take place throughout the course of the LAX/EXPO rail line, planned for a summer 2019 opening.

Upon entering the workshop, participants were asked to walk around the room and vote on which engagement they’d most like to see created in the new Metro ‘open space’ and community areas. Options on displayed easels included renderings of community gardens, Work-share spaces, retails stores and even gym facilities. At around 7pm, after the crowd of about 200+ community leaders settled into their seats facing the podium, Carolyn Patton, Housing Director at West Angeles CDC opened the program which started with a PowerPoint presentation from LA Metro. The heat of the conversation, however during the community Q&A led by one particular young lady who represented Watt, the construction company chosen to handle the development of the spaces surrounding the new Metro rail. Her name is Jamarah Hayner, CEO of JKH Consulting and on this night she took the brunt of the grievances from the Crenshaw community. There were lots of unanswered questions or unresolved problems and Jamarah listened intently to each question, even inviting each person posing the question to talk to her later one-on-one. As the CEO of JKH Consulting, this is Jamarah’s expertise. In the short time since opening her firm in 2016, she has acquired a slew of clients including serving as the spokesperson for the Palladium Residences mixed-use development in Hollywood and developers like Trammell Crow Company and the Santa Monica Chamber of Commerce. It’s her job to be in constant communication with the community throughout the process of a development of this magnitude and what it means for the neighborhoods involved. Metro anticipates the overhauled Blue Line will fully re-open in September 2019, shortly before the Crenshaw Line—which will eventually link the Expo Line to LAX—is scheduled to begin service in October of 2019.

“Throughout this process (Crenshaw/LAX new rail line development), we’ve had all types of conversations. Sometimes there’s 5 people in the room and other times there’s hundreds. This is the second public forum and we’re just in the middle of the whole process. We still have a long way to go.”

When she asked the audience for questions, there were lots of hands that were raised asking specifically about the “affordable housing,” associated with the development space. When Stephanie tried to discuss all of the other developments, which included a large open space community area, a planned fresh grocery store and of course opportunities for jobs, there was little engagement until the question of “affordable housing,” came up again. “If this project doesn’t provide housing at the affordable rate of this community, then this project will attempt to displace this community,” voiced Damien Goodman, Executive Director of Crenshaw Subway Coalition and Chief Strategist for Citizen’s Campaign to Fix the Expo Rail Line “And on public land at that; where there have been other Metro projects are 100% affordable, that’s completely unacceptable. We played this game before and it’s not acceptable.”

Last month, a proposed development entitled the Vermont/Santa Monica Joint Development Project, was publicized that could bring a 100 percent affordable development to the land on the southwest corner of the intersection of Santa Monica and Vermont Avenue, right over the station. The project was created and presented by the Little Tokyo Service Center, the curators of a Budokan community center in Little Tokyo that’s under construction. In the proposal, the new development would hold 160 affordable residential units that would be available to people making 30 to 60 percent of the area median income. Half of the units would be reserved for tenants with special needs.
Others supported him when questioning why some communities had 15% while others had 100% affordable housing, causing residents to question if they are the ones benefiting or those not, living currently in the neighborhood. Cookie Anderson, a Crenshaw resident for more that 25+ expressed her concerns by saying “I live on a street where a house was sold, on an average, for $800,000 and the income brackets are going up. Who will be able to afford that in 5 years? Who’s going to be living here in five years?”

Under state law, new developments paid and voted on by tax payers dollars must include certain previsions that make sure local communities and residents are engaged in the development process. As a part of their deal, LA Metro LAX/EXPO development must hire 35% of the work force used in the development from the community, especially in the area of construction. A portion of housing must be categorized as affordable housing. Affordable housing is based on the reduced costs of housing a family and dependent on the amount of income earned by said family. The state of California sets the rent rates for the affordable housing apartments, meaning, apartment would be affordable to families making 60 percent or less ($16,000 or less) of the median income in LA County around $40,000 a year.