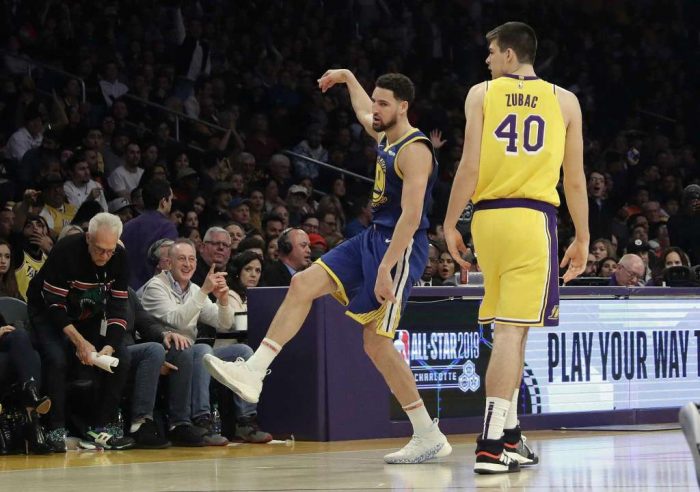 Klay Thompson tied an NBA record 10 straight three-pointers on his way to 44 points as he led the Warriors atop the Lakers 130-111 inside Staples Center on Monday night, Jan. 21.

“That’s Klay,” Warriors center DeMarcus Cousins shrugged. “I think we’re all used to it now. It was 10 straight? S—. That’s impressive. Man, it’s like a new record every day, ain’t it?”

Much to the chagrin of the shorthanded Lakers, Thompson went on a tear that was in part what he describes as redemption for the Lakers’ Christmas day resounding victory at Oracle Arena.

It was in that Christmas Day game, the Lakers suffered their biggest losses of the season to star LeBron James (groin) and veteran leader Rajon Rondo (finger). The pair have not played since. On Saturday, Lonzo Ball was added to the Lakers’ growing injury list as he exited the contest against the Rockets early with a grade three ankle sprain.

“It definitely had an effect,” Thompson said of the Lakers’ recent win. “I will say, one thing about this game is we play these guys four times. You do have to have a short memory because it’s such a long season, but when it’s a beatdown like that, you’re going to remember it.”

As for Monday night’s game, the Lakers hung around in the first half with Brandon Ingram running point guard in place of Ball. At the half, the Lakers had a 10-point deficit, 65-55.

Golden State pulled away with 5:55 left in the third quarter as the starters went on a 27-8 run.  During that period, Thompson scored a season-high 23 points on just nine shots. Kevin Durant admitted that after a point, he started to just look for Thompson.

“We kind of sold to look for Klay, to be honest,” said Durant, who added 20 points.  “When you’re knocking shots down like that, you have to continue to feed him until he goes cold and, tonight, I didn’t see that in sight. He led us to the ‘W’.”

Los Angeles was outscored 45-25 in the third quarter, which put the game out of reach.

Before heading to the bench for the remainder of the game, Thompson flashed the money sign on his tenth  made three-pointer towards Floyd “Money” Mayweather who sat courtside for the California clash.

Monday’s performance marked the fifth time in Thompson’s career that he had 10 or more 3-pointers in a game and the 13th time he has had 40 or more points.

This was just the second game for Warriors’ starting center, Cousins, who finished with eight points and nine rebounds in 21 minutes versus the Lakers. The Warriors completed the sweep of the Los Angeles basketball clubs in a four-day span, which makes an eight-game winning streak.

Golden State remains the one seed in the Western Conference standings since defeating the Denver Nuggets on Jan. 15, while the Lakers are positioned in the ninth seed. Despite a rough stretch without most of the team’s starting lineup, the Lakers remain just four games out of the three seed.

The Lakers will have a three-game home stretch as the team will face the Timberwolves, Suns and 76ers.