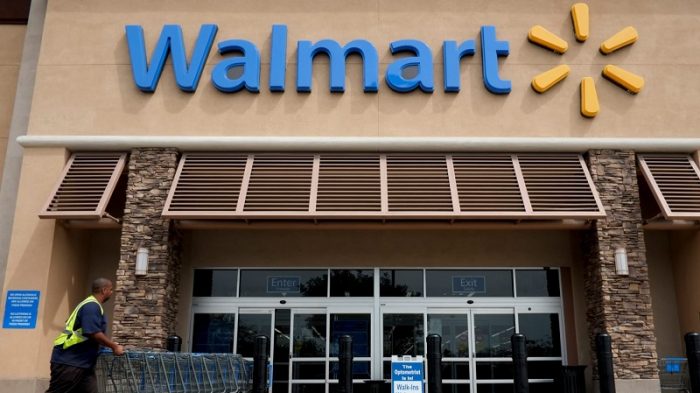 The woman is identified only as Jane Doe in her Los Angeles Superior Court suit filed Thursday. Her suit names as additional defendants Flora Garcia Solares, who allegedly disseminated the photos, and their mutual former boyfriend, Wal-Mart associate worker Lamar Davenport, who she accuses of having given the images to Solares.

A Wal-Mart representative could not be immediately reached.

The suit states that Doe, 51, was hired by Wal-Mart at the Crenshaw District store in 2009, then was transferred to the Torrance location when the Crenshaw store was closed in October 2016. Solares also worked at the Torrance store, according to the suit, which does not state whether Davenport also worked there or at another location.

Solares had also once been in a relationship with Davenport, the suit states.

The same month that Doe broke up with Davenport, he gave sexually explicit photos of the plaintiff to Solares, the suit states.

Solares sent copies of the photos along with “harassing text messages” to Doe, some of them “extremely offensive remarks regarding plaintiff’s anatomy,” the suit states.

“Plaintiff was mortified to receive these images and messages from a co-worker,” the suit states.

Unknown to the plaintiff at the time, Solares also began circulating the photos to their co-workers during work hours and made foul comments about the plaintiff’s alleged sexual conduct, the suit states.

Doe complained about Solares on the company hotline, but months passed without Wal-Mart taking action, the suit states. However, she eventually was ordered to a meeting with the store manager, where she found out that Solares had been showing the photos of her to others in the workplace, the suit states.

“Plaintiff immediate felt mortified at this revelation,” the suit states.

The store manager also alleged Doe was recorded on video making “an obscene hand gesture toward Solares,” the suit states.

Doe denies making the gesture and the manager refused her request to see the video, saying that doing so would violate company policy, according to the suit.

“To date, Wal-Mart has taken no action addressing plaintiff’s complaints regarding sexual harassment from Solares,” the suit alleges.