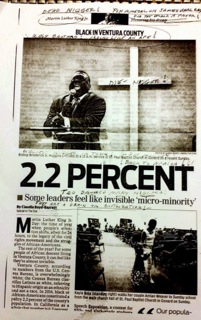 Bishop Broderick Alan Huggins is no stranger to overt or violent racism.

But the Southern California reverend was not prepared when he opened a mailed envelope on Jan. 27 containing a news clipping with a picture of him preaching at “The Annex,” the outreach and evangelism center of St. Paul Baptist Church in Oxnard, where he is the pastor. The grotesque and racist language scrawled all over the news article shocked Huggins.

The unknown sender had scribbled racial epithets and other insults across the clipping taken from The Ventura County Star’s special “Black in Ventura” section.

“I was shocked someone would be that bold and take that kind of time to do something so sinister,” says the pastor of Saint Paul Baptist Church in Oxnard.

Atop the news clipping is a profile picture of King Jr. To the left of the thoughtful picture is the civil rights leader’s name in print. Written above it – “DEAD NIGGER!” A few spaces away – “PIN A MEDAL ON JAMES EARL RAY DID THE WORLD A FAVOR!”

Above the picture of Huggins, the phrases “UGLY BASTARD!” “LOOKS LIKE AN APE” were penned. The envelope’s mailer wrote, “DIE NIGGER!” over the center of the white cross in the background of the picture.

“UGLIEST NIGGER IN TOWN” “UGLY MONKEY” “! BACK TO AFRICA !!!” “TOO MANY DAMN NIGGERS!” and “THEY ARE A DRAIN ON CIVILATION!,” were chicken-scratched above, between, and below the story’s photo caption, headline, and sub headline.

Huggins said he has experienced that type of hate before.

The preacher’s grandfather was lynched by White men over half a century ago. When Huggins was 16 and growing up in Stockton, he was beaten and left for dead in a ditch by a group of white males. The pastor also remembers being fired from a job for being Black. His son, 32-year-old Broderick Alan Huggins Jr., was shot and killed by an Alameda County sheriff’s deputy during a March 30, 2013 traffic stop in Oakland.

“If I wasn’t a pastor, if I wasn’t grounded in the word of God, and if I wasn’t rooted in the love of God there is no telling what planet I would be on right now,” says Huggins.. “I’m not intimidated because it is the word of God that challenges me every day to live with courage and not allow fear to control my goings and whereabouts.”

The reverend said small pieces of inflammatory mail have found its way to the church’s mailbox before but nothing like the envelope that was delivered in late January with no return address. Huggins said he has no clue who marked up and mailed the news article to the church.

Huggins said a lot of people in Oxnard have been supportive in light of the racist attack on he and his church, which has a congregation of several hundred members.

“Everyone is very appalled about what happened,” Huggins said. “White people and black people.”

Many people have posted notes of encouragement on the bishop’s Facebook page.

Dr. LaSonya Davis-Smith typed that Huggins is one of the kindest persons she knows.

“He is always giving of himself to the community and feeding those in need…mind, body, and spirit,” she said. “For someone to do this to anybody would be a travesty but to do this to a true humanitarian such as our Bishop Huggins renders me speechless.”

Huggins’ wife, Toni Huggins, wrote that her husband has been featured several times in the Ventura County Star and said the article was marred by evil comments.

“The reality is … we live in a cold, cruel world and the enemy is busy, and shamefully, racism still rears its ugly head and lives well in Ventura County,” she said.

Rene Camper-Stewart called the mailer of letter a coward.

“We must pray for the sick minds of people filled with hate,” she typed.

Last month, Huggins delivered a Martin Luther King, Jr. Day sermon in front of a majority White crowd at the Arlington Theatre. The pastor’s speech centered on issues of racism and the political climate in America. He also discussed the death of Broderick Jr., his oldest son. Huggins said the speech earned him a standing ovation.

Huggins said he believes the racist attacks in his life are a divine call for him to stand against injustice and racism.

“I have always been a social justice kind of preacher,” he said. “I was raised during the 60s, in that period of activism. It framed my theology.”

The preacher’s is goal is to make teachings from the Bible relevant to young people, who may feel there is no racism in the world.

“They have to deal with this bigoted culture we are in,” Huggins said. “I feel like it is my responsibility as their pastor to give them tools to work with.”

Huggins said he is grateful spiritually that the racist mail was delivered to him and not a pastor that shies away from discussing racism, social justice, and Black issues in the pulpit.

“I can put it in the right perspective,” he said. “I haven’t been white-washed my entire life. I’m not shaken or afraid because this is part of the whole experience of being Black in America. I’m a Black preacher in America, so I have to deal with Black issues.”