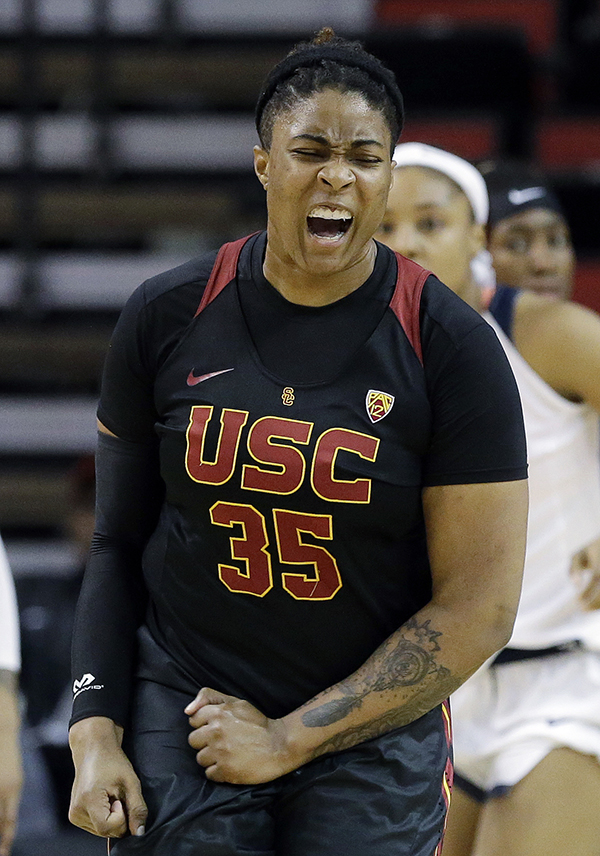 Southern California’s Kristen Simon reacts to a call in favor of California late in the second half of an NCAA college basketball game in the Pac-12 Conference tournament, Thursday, March 2, 2017, in Seattle. California won 71-58. (AP Photo/Elaine Thompson)

The Golden Bears had a Southern California split on their minds, after they dropped a 60-52 loss against No.13 UCLA at Pauley Pavilion Friday night.

That loss seemed to turn into fuel for California, as the Golden Bears outrebounded the Trojans 35-26 on a night where the USC only played six-players.

Kristine Anigwe scored 20 points in only 20 minutes of play for Cal, as she picked up her fifth foul at the 5:01 mark in the fourth quarter.

“We wanted to go inside, I thought Kristen [Simon] did a job on her…Minyon (Moore) went down and stole the ball a couple times, but she’s obviously a great player,” said USC coach Mark Trakh.

“That was big for us to stay in the game, you know just getting her in foul trouble,” said Trakh.

Anigwe, a midseason candidate for the John R. Wooden National Player of the Year Award leads California in both scoring (17.8 points per game) and rebounding (9.1 rebounds per game), which ranks in the top of the Pac-12.

USC found themselves leading with 1:59 to play after Kristen Simon scored a lay-up under the basket, making the score 59-58.

However, on the next possession, California guard, Asha Thomas converted on the go-ahead 3-point play with 1:29 to play, after she was fouled by Minyon Moore. 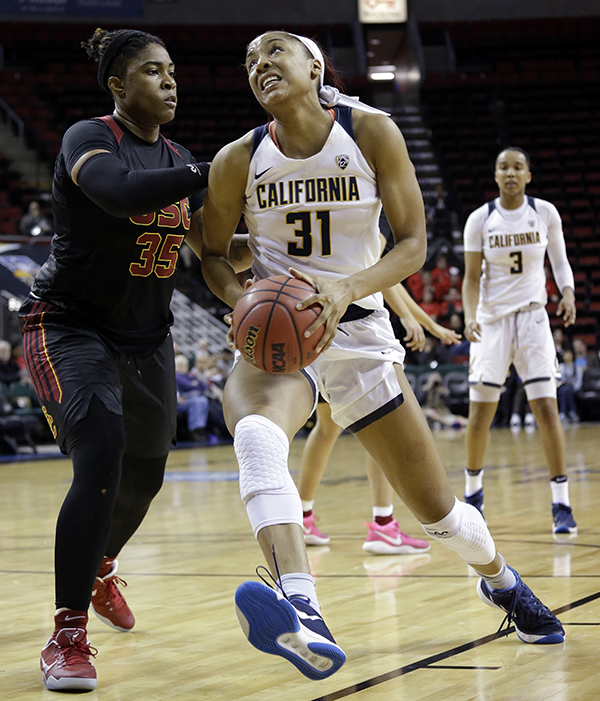 Thomas was good on the free throw, giving the Golden Bears a two point lead, 61-59, as their defense was stifling down the stretch, forcing the Trojans to shoot 22.2 percent from the three-point line and 37.7 overall percent from the field.

Down the stretch, the USC went to their best shooter in Aliyah Mazyck, as she misfired on four three-point attempts in the final 1:16 of the game.

The Trojans were forced to intentionally foul CJ West, as she made 1 of 2 free throws for the Golden Bears with 18 seconds remaining and USC ultimately could not get a shot to fall with their final possession.

Although Mazyck was unable to convert from three-point range in the final minutes, she was still able to add 13 points, on a night where she played all 40 minutes.

USC coach Mark Trakh still took many positives from his team’s gritty performance, as they have now lost their last two home games in Stanford and California, by a combined margin of only 7 points.

The Trojans found themselves leading 37-35 at the half mark, but only converted a combined eight total of field-goals through the last 20 minutes of the game.

“I’m very happy with the effort of my team and very happy with Minyon (Moore’s) effort tonight and we’re on the road right now, we’re [3-5 in the conference] and we have to figure out a way to get back to .500.”

“I think our starting five is doing a really good job.” said Moore. “Even though we are fatigued, we’re playing through it because we take it game by game, it’s not all about ourselves and we just play for our team.” 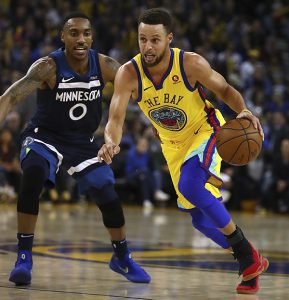 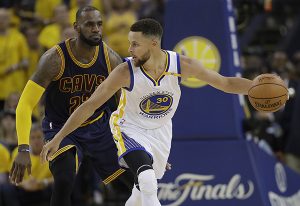