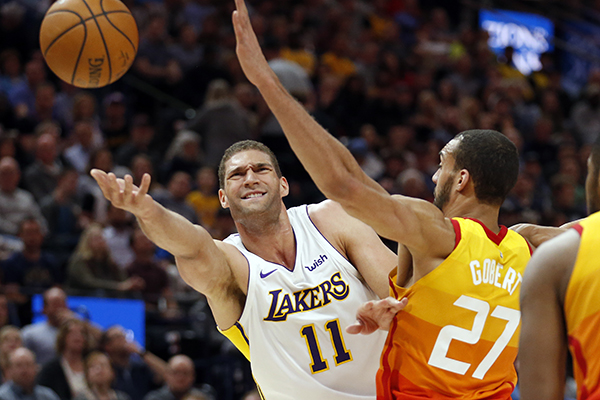 With their 112-97 win over the Lakers, the Utah Jazz clinched a Playoff berth. Although the depleted Lakers roster competed courageously in the first half, Utah combined for a 62-point effort in the second half.

Head coach Luke Walton wanted the Lakers to continue to compete and get the crowd behind them.

“I thought we did a pretty good job of that in the first half,” he said. “In the second half, we were too hit-and-miss with the way that we were getting out and getting after it, that’s when they kind of opened up that lead and kept us from getting into the game.”

“He’s the unsung hero. He’s one of the guys that not everybody talks about, but he comes in and gets the job done,” Mitchell said about Favors. “There’s certain possessions where he has gotten boards where we didn’t have a chance.”

“[Ennis] did a great job of coming in, controlling the pace, being aggressive to score,” Randle said.

Utah held the Lakers to four points in the first six minutes of the game. Los Angeles relayed on their defense and speed to combat against the Jazz. Hart landed two fast break buckets, guard Kentavious Caldwell-Pope and Hart blocked shots, and Randle finished at the rim.

Attacking the paint would get the Lakers to 21 points by the end of the first quarter. To aid in the Lakers defensive efforts, Ennis committed three steals.

“I just saw that the energy was low. Obviously, we’re shorthanded, so it’s hard to come out sometimes,” Ennis said. “We all have roles on this team. When guys are out, you have to be professional about it and seize that opportunity.”

Los Angeles continued their strong offensive campaign, scoring eight points early in the second quarter. Once the Lakers whittled their deficit to four, Utah rediscovered their shot. A three-pointer from forward Jae Crowder would give the Jazz a 10-point advantage.

Hart and Randle landed baskets near the end of the second, but the Jazz found a way to maintain their lead. 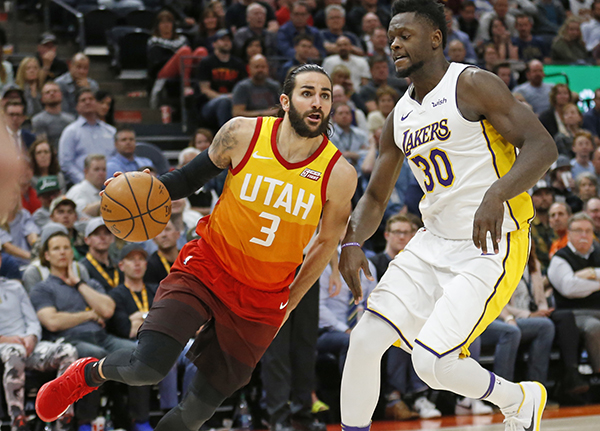 Yet, Los Angeles continued to fight although the Jazz had a response to their shots. Forward Joe Ingles helped the Jazz regain their 10-point lead. Caldwell-Pope and Hart found offensive opportunities but could not defend the layups of Donovan Mitchell.

“We really wanted to get locked in defensively and move the ball offensively,” said Jazz center Rudy Gobert. “We did a really great job taking care of the ball in the second half.”

The Lakers were looking at 15-point gap in the fourth quarter and the Jazz quickly expanded the lead to a 20-point deficit. Two Way players Thomas Bryant and Gary Payton II were given a rare chance to compete on court, scoring three and four points respectively.

Ennis’ 11-point performance in the fourth quarter was the main cause of his career high. The Jazz remained efficient, however, making good of their possessions. Forward Royce O’Neale knew how to skirt past Lakers defenders, earning nine points in the final act.

When facing the toughest defense in the NBA, the Lakers revved up their own defensive charge, tying with the Jazz with eight steals and four blocked shots.

“They’re active. They communicate,” Hart said about the Jazz. “They kind of had the game in their pace. When you have those kinds of things you can do good.”

The Lakers will play their final home game against the Houston Rockets on Tuesday. April 10 at 7:30P.M.