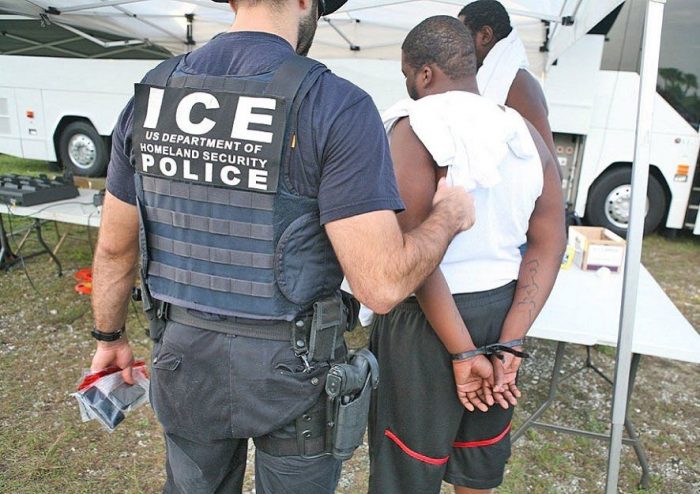 An ICE officer with an immigrant (U.S. Immigration and Customs Enforcement

A simmering dispute between the U.S. and Ghana appears to be resolved. Some 7,000 Ghanaians can now be deported from the U.S. and a key demand – that their Ghanaian citizenship be proven before deportation – has been dropped.

The dispute was settled at the United Nations General Assembly meeting last month.

Speaking with the press, Ambassador Baffour Adjei-Bawuah said there was no longer any dispute over the nationality of the affected persons which had been a bone of contention earlier.

American immigration officials have every documentation and information that allows the person to be returned to Ghana so they do not need confirmation from the Ghanaian Embassy, he said.

Adjei-Bawuah said the agreement had been held up pending “a certain fairness to be applied” and that the Embassy not be pressured to see some people deported. “This is where we had a difference of opinion with the US authorities,” he said.

It was a 180 degree turn for Dr. Adjei-Bawuah who initially refused to endorse the U.S. deportation forms despite the insistence of US authorities, explaining that he could not confirm that the person to be deported had a legitimate and fair trial.

“The Americans say the trial was fair but you were not in the courtroom. You don’t know whether the person’s defense lawyer did seriously and adequately question the prosecution,” he said.

“Our argument is that we don’t have to be the final arbiter in the execution of a deportation order because we don’t have the information,” he said last May.  “I’ve been trying hard to explain this to the authorities.”

Appalled by the Ambassador’s latest stance, the minority in parliament slammed the government for not telling the House about the development especially the Foreign Affairs Committee.

Meanwhile, Foreign Minister Shirley Ayorkor Botchwey was insisting as late as this week that Ghana will not facilitate the deportations despite weeks of diplomatic pressure from the US.

“I don’t know of any understanding” she said, dismissing the report while she explained that any agreement would need the president’s approval.

The U.S. wants an agreement to deport illegal immigrants within 24 hours on a chartered flight, but they also want the Ghana government to issue a certain number of travel documents per week, she said. It’s “just not possible,” she said, and also expressed concerns about the manner in which Ghanaians are deported – shackled, or in belly chains.