In recognition of the 20th anniversary of the Million Man March, TV One will present a two-hour special on Friday, Oct. 9 from 8-10 p.m. ET. The evening’s programming, presented by News One Now host and managing editor Roland S. Martin, will feature the network television premiere of the acclaimed documentary The Million Man March Story, followed by a News One Now primetime roundtable discussion.

“The Million Man March was a special day in American history,” noted On The Potomac Productions President Thomas Hart Jr. “It was one of the inspiring moments of our time, and is quite relevant to the issues of today.

Immediately following the documentary, News One Now will convene a roundtable discussion moderated by Roland S. Martin, featuring a panel consisting of politicians, entertainers, civil leaders and activists. Additional guests will provide commentary and analysis of the connection between the March and the current Black Lives Matter movement.

“Once again, News One Now’s unique perspective leads the discussion around a pivotal moment in our culture’s history that has had such a profound and influential impact on the nation,” remarked Martin. “The insight and viewpoint we will provide throughout this special programming event reflects our commitment to continual coverage of matters that are important to the Black community.” 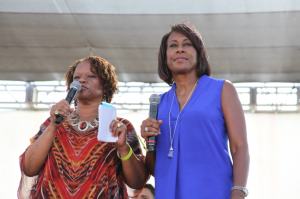