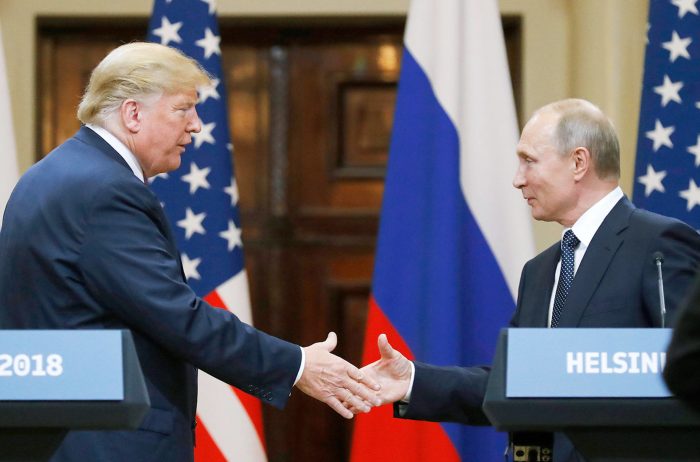 President Trump and Russian President Vladimir Putin shake hands at the conclusion of the press conference at the Presidential Palace in Helsinki, Finland. (AP Photo)

Journalists, political experts, and politicians across the political spectrum are skeptical about President Trump’s meeting with Putin last Monday.

The president met with Russian President Vladimir Putin in Helsinki, Finland on July 16, and while many expected the president to address pressing international issues related to Russia, the most important one being Russian meddling in the 2016 presidential election, what actually occurred was alarming. Though the meeting was private – the only witnesses were translators – the two leaders held a 45-minute press conference afterwards.

Hours before the meeting, Trump took to Twitter to blame the United States for not fostering a better relationship Russia, claiming that U.S.-Russia relations have “NEVER [sic] been worse thanks to many years of foolishness and stupidity.”

Forty minutes before the meeting, a simple reply came from Russia’s Ministry of Foreign Affairs: “We agree.”

The meeting came less than a week after the NATO Summit, wherein the president bashed U.S.  allies and sought a confrontational approach to many of the issues discussed, including increasing the military spending of allies to match the United States’.

Trump claims that the summit was a victory, and that his meeting with Putin went “even better.”

But what the meeting and subsequent press conference ultimately demonstrated was a win for Russia. President Trump gained very little by avoiding confrontation with Putin and criticizing his own country on a world stage.

Though there is no record of what the leaders discussed in their two-plus hour meeting, the press conference gives insight into the Trump-Putin dynamic, which is the topic of much anxiety and apprehension given its departure from previous presidents’ foreign policy initiatives.

“I have been very reluctant to come to the conclusion that he’s a controlled asset,” Clarke said in an interview with CNN’s Christiane Amanpour. “But that’s the term we use in the intelligence community when we have someone in another government who, for whatever reason, does what we want them to do because we’re bribing them, because we have something on them. He is acting like a controlled asset.”

In light of last week’s indictment of 12 Russian military intelligence officers who were accused of hacking Democrats during the 2016 election, members of Congress on both sides wanted to see some sort of accountability or acknowledgement from Putin. Instead, they observed the president’s continued praise for the authoritarian leader.

Throughout the press conference, Trump criticized U.S. national intelligence and Democrats more than he criticized Putin, which experts believe suggests there is more to the bizarre, unprecedented relationship between the two leaders.

When asked about having compromising material on President Trump and his family, Putin responded cryptically:

“Well, it’s difficult to imagine utter nonsense on a bigger scale than this. Please disregard these issues and don’t think about this anymore again.”

The press conference lacked accountability on Russia’s part. After all, the country, which is also the world’s largest nation, has been involved in a number of pressing international conflicts including killing at least 30 civilians in airstrikes in Syria, invading Ukraine, and using chemical weapons to kill two U.K. civilians.

“It looks like U.S. national interests would have been better served had Trump stayed home,” Steven Pifer, an expert of Russia at the Brookings Institution, said to Vox.

Indeed, the president dodged an honest and necessary conversation with the Russian leader whose presence has pervaded U.S. political news for over a decade, and overwhelmingly so in the last few years for election meddling.

“I have President Putin; he just said it’s not Russia. I don’t see any reason why it would be,” Trump said.

This comment is even more unsettling knowing that during the press conference, Putin admitted to wanting Trump to win the presidency.

However, the president is already retracting his statement. Today, after backlash from Democrats and Republicans alike for the widely-circulated answer, he offered a revision of the comment.

“The sentence should have been, ‘I don’t see any reason why I wouldn’t, or why it wouldn’t be Russia’ instead of ‘why it would,’” Trump said. He later accepted the FBI’s conclusion in Russian meddling but said that “other people” could have been involved as well.

While the summit was hastily planned and as a result, lacked substance, a small victory can be found in Putin’s vague declaration that he wants to extend the New START Treaty, which places limits on nuclear weapon use for both countries. This is especially important because it reduces tensions in a potential arms race between the U.S. and Russia by allowing them to keep tabs on one another’s nuclear programs.

Still, there were no major breakthroughs on international affairs, and Russia’s ability alone to secure a meeting with President Trump is significant because it takes steps toward redefining what has historically been an adversarial relationship, normalizing this connection in the process.

John Brennan, CIA director under the Obama administration, blasted the president for the outcome of the meeting, describing it as “nothing short of treasonous.”

“Donald Trump’s press conference performance in Helsinki rises to & exceeds the threshold of ‘high crimes & misdemeanors,'” He tweeted on Monday. “Not only were Trump’s comments imbecilic, he is wholly in the pocket of Putin.”