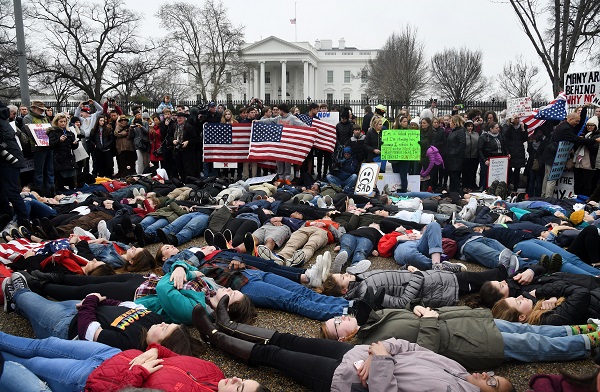 Students take part in a “lie-in” on the road outside of the White House February 19, 2018 in Washington, DC , for three minutes at a time in an effort to symbolize the short amount of time it took alleged shooter Nikolas Cruz to gun down numerous people at Marjory Stoneman Douglas High School in Parkland, Fla., last week.Photo by Olivier Douliery/Abaca Press(Sipa via AP Images)

Last month, authorities rushed to the scene after receiving 911 calls that a school shooting was taking place at Douglas High School in Florida. The incident left 17 people dead and poised the rest of the U.S. to once again debate gun control laws and look to the Trump Administration for answers.

On Sunday March 11, the Trump Administration proposed providing certain school personnel with “rigorous” firearms training for “specifically qualified” school faculty on a voluntary basis. Additionally, the administration is seeking assistance from the Department of Justice in providing school personnel with firearm training from state and local law enforcement agencies.

In addition to arming qualified school personnel with guns, the administration also stated that it would provide states with funding for training, technology and any further assistance in order to help schools understand, recognize, and stop school shooting and violent acts from occurring.

The administration also announced that they will support military veterans and retired law enforcement officers in pursuing careers in education and urge state attorney generals to inspect school districts and determine if they are in accordance with state emergency preparedness rules and standards.

President Trump is also looking to support a bill that will improve background checks for gun buyers. The proposal also includes a commission that will be spearheaded by Education Secretary Betsy DeVos, that will put forward policy and funding proposals for school violence prevention and possible age restrictions for a variety of firearm purchases.

“Today we are announcing meaningful actions, steps that can be taken right away to help protect students,” DeVos said in a statement.

“Far too often the focus has been only on the most contentious fights — the things that have divided people and sent them into their entrenched corners,” she continued. “But the plan that we’re going to advance and talk about is a pragmatic plan to dramatically increase school safety and to take steps to do so right away.”

The administration is also in favor of Senator John Coryn and Senator Chris Murphy’s “Fix NICS” bill, which is said to improve the way in which the National Instant Criminal Background Check System receives information. The improvement will also persuade authorities to adhere to the law by providing them with financial incentives for reporting criminal history records. 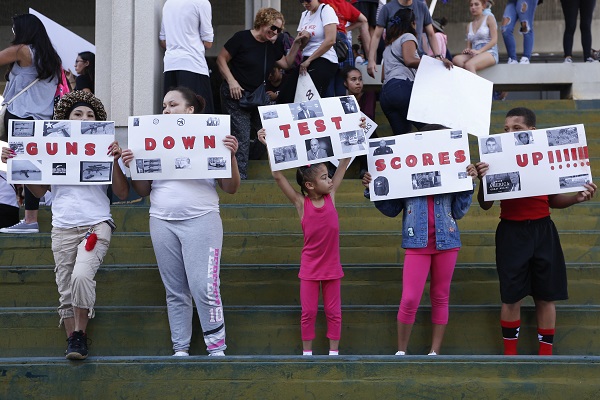 A group of people hold signs that read ‘Guns Down Test Scores UP’ during a protest against guns on the steps of the Broward County Federal courthouse in Fort Lauderdale, Fla., on Saturday, Feb. 17, 2018. Nikolas Cruz, a former student, is charged with killing 17 people at Marjory Stoneman Douglas High School in Parkland, Fla., on Wednesday. (AP Photo/Brynn Anderson)

Currently, under federal law, it is considered, “unlawful for any person to sell or otherwise dispose of any firearm or ammunition to any person knowing or having reasonable cause to believe that such person ‘has been adjudicated as a mental defective or has been committed to any mental institution.’”

According to the state of California Welfare and Institutions Code section 8100, “A person shall not have in his or her possession or under his or her custody or control, or purchase or receive, or attempt to purchase or receive, any firearms whatsoever or any other deadly weapon if … he or she has been admitted to a facility and is receiving inpatient treatment [for a mental disorder], is a danger to self or others, even though the patient has consented to that treatment.”

To better control persons who are mentally ill getting their hands on firearms, Trump is expanding mental health programs. The expansion would help identify and treat people who may be a threat to themselves or others. He also proposed an increase in mental health resources, primary care, family services, and support for programs that utilize court-ordered treatment.

Although Trump is addressing the issues of school violence and mental health in regards to gun laws, many questions remain and everyone isn’t on board.

“Arming teachers would have had no impact on the tragedies in Las Vegas, or Sutherland Springs, or San Bernardino, or Orlando. The worst part? Trump is their pitchman. The companies that sell the weapons get richer. More people will die.”

How will parents and school personnel keep students in the mean time?

Recently, Dr. George J. McKenna III announced that he would hold a town hall meeting on “Schools as a Safe Zone.” The event, located at Los Angeles Southwest College at 9am, is said to help families and members of the community understand the role they play in keeping schools safe and creating a safe learning environment.

To register for the event please visit www.drgeorgemckenna.com .

CNN contributed to this report