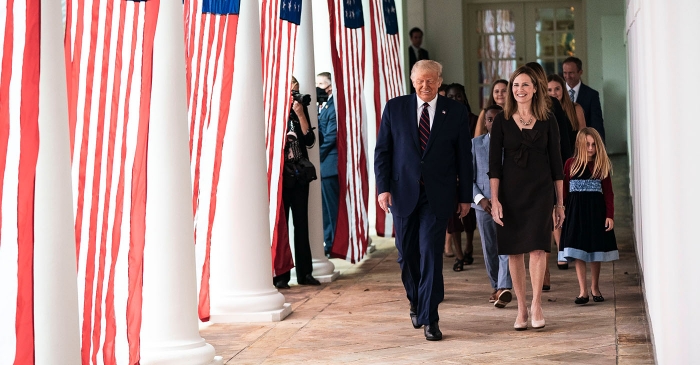 President Donald J. Trump walks with Judge Amy Coney Barrett, his nominee for Associate Justice of the Supreme Court of the United States, along the West Wing Colonnade on Saturday, September 26, 2020, following announcement ceremonies in the Rose Garden. (Photo: The White House/Shealah Craighead)

Amy Coney Barrett, a conservative judge with a stated opposition to the Affordable Care Act and many Civil Rights laws, was confirmed on Monday, October 26, 2020, as the next Supreme Court Justice.

“After refusing a Democratic nominee to the Supreme Court because an election was eight months away, they will confirm a Republican nominee before an election that is eight days away,” said Senate Minority Leader Chuck Schumer of New York, who is a Democrat.

“The Republican majority is lighting its credibility on fire. This hypocritical, 180-degree turn is spectacularly obvious to the American people. The American people will suffer the consequences of Judge Barrett’s far-right, out of the mainstream views for generations,” Schumer warned.

The high court now has three appointees of President Donald Trump and a 6-3 supermajority.

It also sets up a window for Trump to sabotage the General Election, one in which polls show he trails by double-digits heading into the final week of campaigning.

“In the crudest possible disparagement of Justice Ginsberg’s work, the Senate has continued its court-packing with the confirmation of far-right extremist Amy Coney Barrett to the U.S. Supreme Court. Not only an insult to the memory of a tireless advocate for human rights, outspoken protector of equality, and lifelong advocate for justice, the move is an unapologetic and hypocritical power grab by Trump and his co-conspirators in the Senate,” stated Marcela Howell, the president, and CEO of In Our Own Voice: National Black Women’s Reproductive Justice Agenda. 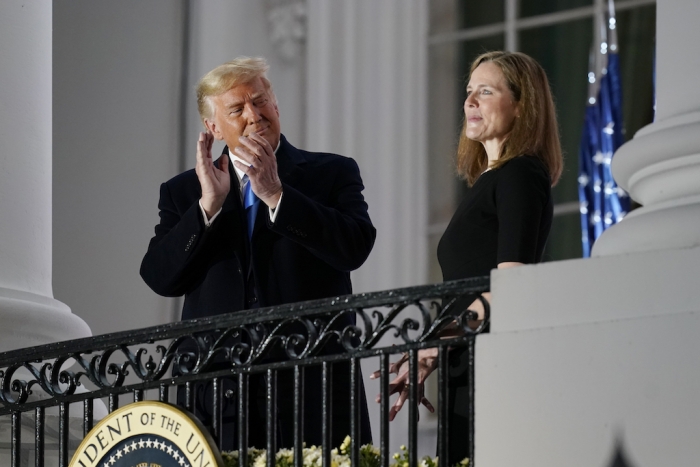 Among the issues the Supreme Court will soon hear are Pennsylvania ballot extensions.

Just two days before Barrett’s confirmation, the GOP in the Keystone State asked the U.S. Supreme Court to block a ballot receipt extension that would allow them to be counted if received within three days of Election Day – even if they do not have a legible postmark.

Three Wisconsin petitions are also before the court that concern Democrats who ask the justices to allow the counting of ballots six days after the election and whether COVID vulnerable voters and others in the state can secure replacement mail-in ballots via email.

Also, a Republican candidate for Minnesota’s 2nd Congressional District has asked the court to intervene in a case concerning whether his election takes place on November 3 or on February 9.

The controversy arose after the recent death of Legal Marijuana Now Party candidate Adam Weeks which caused the contest to be moved to next year as required by state law.

The court is preparing to hear whether a New York prosecutor will get access to Trump’s financial documents from January 2011 to August 2019, including his tax returns.

It’s believed Coney would side with Trump, raising concerns that if the high court has to decide the 2020 presidential election, the president will retain the office because he’s appointed Coney and two other justices: Neil Gorsuch and Brett Kavanaugh.

Schumer noted that abortion rights are also on the line.

In Mississippi, a federal judge struck down the law in November 2018, and the 5th U.S. Circuit Court of Appeals upheld the ruling late last year.

“I believe that, given how she outlined, not only to me but how she spoke to the issue of reliance when she was before the committee, I believe that she will look at that and weight that in any matters in any cases that come before her that take up Roe v. Wade,” Murkowski said.

“I don’t see her overturning the decision in Roe v. Wade, based on based on the weighting of other reliance factors,” she added.

Another significant case facing the U.S. Supreme Court this fall is the Affordable Care Act’s fate, which Barrett has gone on record opposing.

With no replacement for the health care law – commonly known as Obamacare – it’s estimated that more than 22 million Americans will lose coverage. That number includes a large swath of African Americans and others with preexisting conditions.

“Without a replacement in place for Obamacare, the loss of this act will make things more difficult for those who need healthcare the most, in particular, the underrepresented and underserved communities, and those with preexisting conditions,” stated Dawon Hawkins, the Chief People and Training Officer for the health care startup Xcelrate UDI.

“Obamacare has provided affordable healthcare for millions of Americans, particularly 25 million Americans who will be left uninsured,” Hawkins continued. 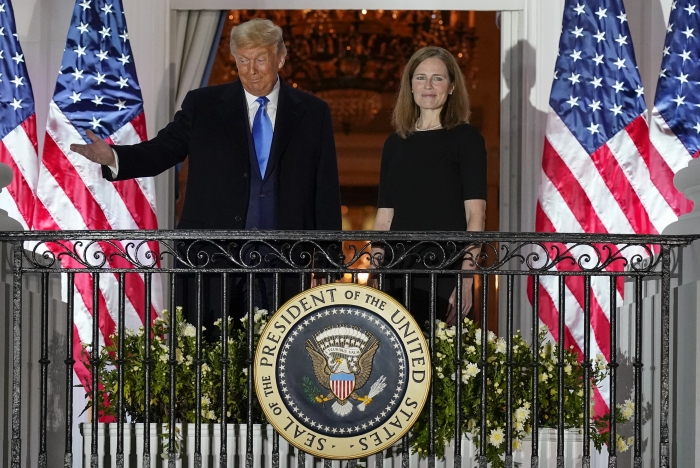 President Donald Trump and Amy Coney Barrett stand on the Blue Room Balcony after Supreme Court Justice Clarence Thomas administered the Constitutional Oath to her on the South Lawn of the White House White House in Washington, Monday, Oct. 26, 2020. Barrett was confirmed to be a Supreme Court justice by the Senate earlier in the evening. (AP Photo/Alex Brandon)

Losing coverage could also prove devasting for women and expecting mothers, shared Andrea Ippolito, a health tech expert and founder of SimpliFed, a company that assists mothers who breastfeed.

“Right now, under the Affordable Care Act, it is your right to have access to lactation support and counseling without cost-sharing for as long as you are breastfeeding. If the ACA gets struck down, the insurers will not be required to cover it, which could have devastating impacts on new parents,” Ippolito noted.

The confirmation earned the ire of American Federation of Teachers President Randi Weingarten.

“Just days before voters elect the next president, with nearly 60 million ballots already cast, Majority Leader Mitch McConnell’s Senate ignored the will of the people and installed another ideological soulmate for President Donald Trump on the Supreme Court,” Weingarten said in a statement.

“It’s a flagrant miscarriage of justice, and it flies in the face of our representative democracy. In fact, McConnell and Judge Amy Coney Barrett said so themselves, in 2016 when President Barack Obama nominated Merrick Garland to the Supreme Court nearly nine months before the presidential election.

“But, as usual, Senate Republicans have changed the rules and trampled on the voices of the very people who elected them. To them, it was never about appointing a qualified judge to simply apply the law; they want Barrett on the court because of her right-wing views on access to healthcare, reproductive rights and freedom, voting rights, LGBTQ equality, immigrant justice, criminal justice, disability rights, and other issues that make a difference in the lives of most people.

“This confirmation should frighten every person in this country who believes in fairness, rules and having a say in how we’re governed. Barrett’s lifetime appointment to the Supreme Court swings it in an extreme direction that does not reflect the American people’s values.

“Make no mistake: This Senate chose to fast-track a political process instead of passing COVID-19 relief and helping the millions of Americans struggling to find work and access care during this pandemic. This choice reflects a pattern of cruelty and neglect that should disqualify everyone from public office.

“But even under normal circumstances, Barrett’s record is enormously troubling. Throughout her brief career as a judge on the U.S. Court of Appeals, she ruled to undermine workers’ rights and against sexual assault survivors.

“At her confirmation hearing, she evaded questions on the right of Americans to have access to healthcare, Medicare and Social Security; she refused to acknowledge systemic racism, and she was not clear that discriminatory barriers in voting exist.

“Barrett even refused to acknowledge basic facts about our democracy – that presidents should commit to a peaceful transition of power, that voter intimidation is illegal, and that presidents cannot change the date of an election. Her judicial philosophy closes every door that Justice Ruth Bader Ginsberg ever opened.” 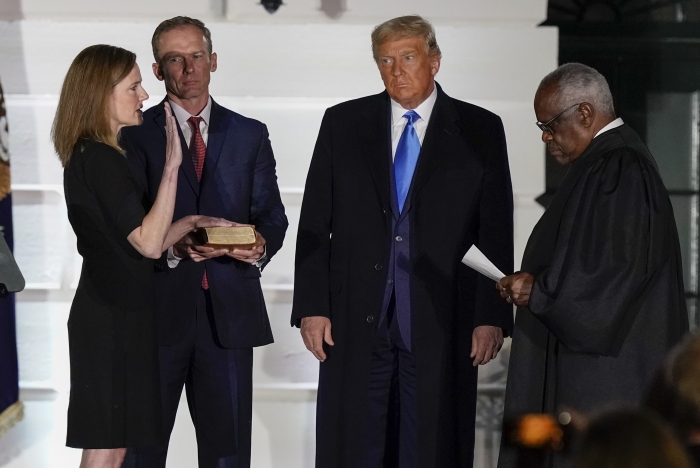 President Donald Trump watches as Supreme Court Justice Clarence Thomas administers the Constitutional Oath to Amy Coney Barrett on the South Lawn of the White House White House in Washington, Monday, Oct. 26, 2020, after Barrett was confirmed to be a Supreme Court justice by the Senate earlier in the evening. Holding the Bible is Barrett’s husband, Jesse Barrett. (AP Photo/Alex Brandon)