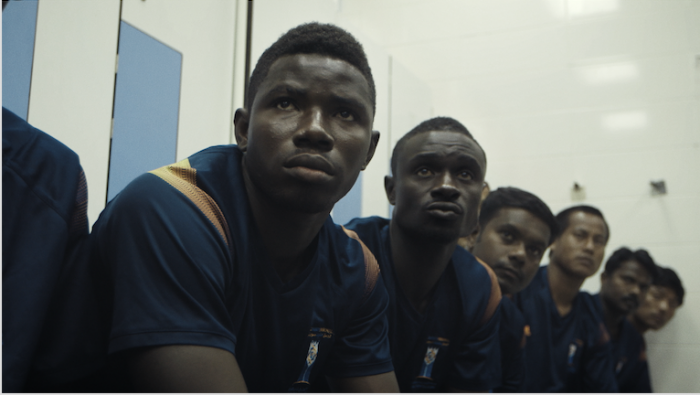 In Qatar, migrant workers from Kenya, Ghana, Nepal, and India were enticed to travel to gain employment, building a new stadium for the 2022 World Cup.  There was nothing glamorous about the job. In fact, these men accepted and experienced such crippling dehumanizing labor for these cold corporate companies because despite the poor conditions the pay was significantly better than a job in their own country.

How much better was the financial gain? For most, the dollar amount was minimal. They all lived in very cramped, dirty labor camps far, far away from their families. To add insult to injury there were working seven days a week, which is illegal, and they all spoke about freedom in such romantic terms as if such a thing was a dream.

But at the end of their grueling shift, they looked forward to playing the game of soccer for the sport with their co-workers, against other companies, which became a tournament they named the Workers Cup. FYI, the name of their employing company is the also the name of their team.

Director Adam Sobel is a man of commitment and empathy. It was filmed over 87 months so his point-of-view, which began before the World Cup started, has a matter-of-fact tone.  The building is slow and the work is hard. The lens is focused on telling the truth about the appalling conditions and just how important the escape of playing soccer provides. It’s more than just a release from boredom. To note, some of the workers are amazing players, showing great promise. Kenneth is one such person who received a bonus from the company, a small distinction since he’s just one clog of the machine.

Deep feelings run inside the workers and Sobel used his access to these men giving voice to their personal thoughts which are brilliantly captured in interviews.  The honesty expressed is so raw — it’s a miracle that the film got made, at all.

Frustration paints this entire documentary from frame-to-frame, even when filming the exciting soccer scenes, but as an audience, we know that they are going “home” to a dismal place.

“The Workers Cup” is about the class, and looking at human beings just as slave labor.

To highlight the point based on the facts presented, these men are part of a modern-day slavery operation with a soccer ball. At the core for most of the men’s intention is a sacrifice for their families. It’s repeated again and again.  When asked if they are slaves, one man states that

“We are not slaves” but the evidence suggests otherwise. Considering themselves athletes they pour themselves into the sport with all their heart.

The camera seems to have an opinion and under the directors’ eye, he shows the luxury next to the poverty and how it impacts them.  One athlete from Ghana talks about making money as a soccer player so he can send money back to his father: “If this is hell then I’d rather be in hell than in heaven in Ghana.”

It’s heartbreaking to listen to the men who want to be taken seriously as soccer players, and Sobel tries to give them some special treatment, and he does often enough for you to feel, deeper.

The good part of playing this sport or any sport, for that matter, is that it transcends language. It’s its basic needs that creates camaraderie which translates to feeling like a human being.

“The Workers Cup” is a documentary for the thinking viewer and you can thank the director, Sobel for that. 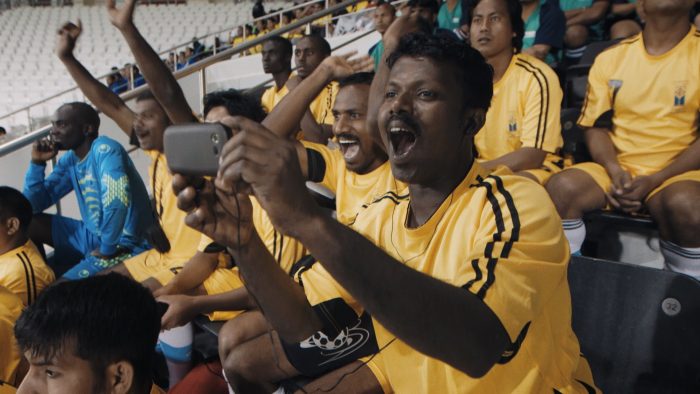 Director Adam Sobel is passionate and in his documentary, “The Workers Cup,” he puts his heart on his sleeve.  He cares.  In a turn of events that he never imagined, he took a job (2010) in Qatar and moved with his significant other, now his wife, and there, so far from home, his life changed, a lot.

He quickly landed a production job creating news stories, and documentaries for major outlets like HBO, CNN, and BBC.  One story hit him hard, and it was a story about a group of migrant workers who were building the facilities for the 2022 World Cup in Qatar. It was the people that interested him and for 87 long months he went into their lives and the end result was the documentary — “The Workers Cup” now playing in a limited run in Los Angeles, and New York.

It’s the time of the film that causes strong word-of-mouth. Here’s what the director — Adam Sobel had to share about telling the truth on camera.

Los Angeles Sentinel:  I’m amazed that the level of access that you seem to have obtained in this documentary.  I’m shocked. Dude, I’m shaking.  This is super sensitive stuff. How did the owners of the corporation in Qatar allow this?

LAS: These men’s lives are exposed. This is raw.

LAS:  Empathy vs sympathy. That is a very strong distinction.  I’m leaning toward stating that you achieved the empathy.

LAS:  You have a wide selection of men from India, Ghana, Kenya, and the Philippines, who —in my opinion, and based on the film — are slaves. How in the world could these people get so tricked? Rhetorical question?

AS: We’ve had a lot of context about how the recruiting agents are selling a false bill of goods but certainly, I didn’t expect that to be wrapped up in a professional soccer contract. That was a shocker, really.

LAS:So that I am clear when you refer to FIFA we are talking about a FIFA–sponsored “workers cup” which had teams from different construction companies play against one another in a tournament, correct?

AS: Correct and when you compare to their horrible living conditions, soccer becomes more than just a sport.  We saw (the tournament) as an opportunity because we knew they were interested in promoting this and showing to the world that workers welfare standards were improving.

AS: (laughing) Sure, I mean there was a definite PR spin and we took advantage and we managed to stick around and keep shooting in the camps. We were able to actually get pretty close to the story.

LAS: How long did this take?

AS: Three years and I kept it completely secret for two due to the sensitive nature that we captured.

LAS: That director Adam Sobel is an understatement.