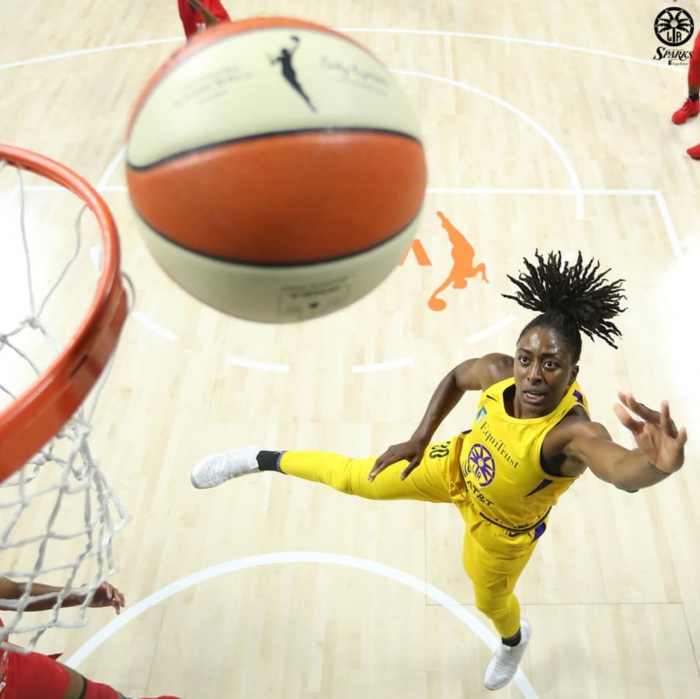 Sparks superstar Nneka Ogwumike is once again snubbed from playing in the Olympics. Most say it’s politics, but there has to be deeper reasoning because Nneka is undoubtedly one of the best players in the WNBA.

Fans all over the world were shocked to witness the USA Women’s Basketball team disrespect Nneka. As the Sparks prepare for their upcoming games, it is difficult for them not to acknowledge the terrible decision.

Without a solution or long-term goal, Sparks head coach and GM Derek Fisher believes the Olympic situation with Nneka shouldn’t be actively discussed.

The awareness should be focused on how much Nneka should be valued, appreciated, and respected worldwide and women’s basketball, says Fisher.

“The trailblazer she is, I think that should continue. At some point, we have to move on from making the focus on what Team USA should or shouldn’t have done. For the Sparks, we’re going to focus on the greatness of who Nneka is and celebrate that and do what we need to do now.”

Fisher says Nneka is the most impacted, and if she’s not going to speak on it and get involved, they shouldn’t entertain the nonsense. “Initially, we need to know how much we support her and got her back all the way.”

With the quality of players that come out of Stanford, sadly, they haven’t had an Olympic player since 1996.

As the first pick in the 2012 draft, Nneka should have been on the roster, as most international teams allow one young player to get the experience.

In 2016, Nneka won the WNBA MVP and still didn’t get the opportunity. Fast forward to this year, and she was snubbed again.

Fisher says, “I think this year was an opportunity that was well earned, well deserved, and it isn’t happening.” However, he states the team will make the most out of a difficult situation for her.

Nneka is staying positive and won’t let anything bring her down. The support of her teammates showed how much she is appreciated.

Chiney Ogwumike, Nneka’s sister and teammate, went to Twitter and shared her thoughts:

Sparks guard Te’a Cooper said it’s disheartening to see Nneka off the Olympic team. “It’s kind of disrespectful to know what she does for basketball, and Nneka exemplifies what an Olympian should be.”

Cooper will continue to use her platform to bring awareness to Nneka’s situation and other issues going on in the world. She was recently featured on Jordan’s Brand’s largest female roster ever.

“It’s remarkable for a man of Jordan’s caliber to support us. Nobody has to do it, and he puts us at the forefront. He believes and cares for us. It’s greatly appreciated.”