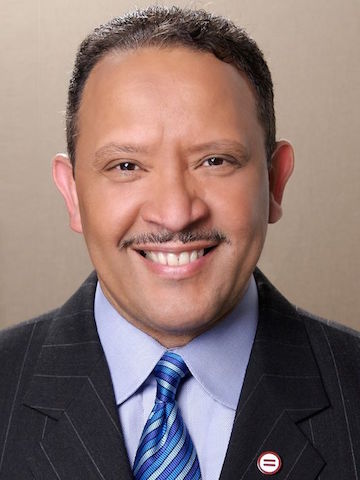 “John understood that to truly change hearts and minds in the LAPD, he had to go to work on the inside. And because he was not someone who just shouted in anger and tore things down for the sake of tearing them down, the LAPD saw they could trust him. That’s rare leadership.” – Civil rights attorney Connie Rice, on John Mack’s appointment as Los Angeles Police Commission President

When Los Angeles was devastated by unrest in the aftermath of the Rodney King trial, the person to whom President George H.W. Bush reached out was Los Angeles Urban League President John Mack. It was John Mack who guided the redevelopment of the neighborhoods shattered by the riots.

It was a familiar role for John, who first arrived in Los Angeles in 1969 just a few years after the infamous Watts riots.

The death of John Mack last month, at age 81, was a tremendous loss to the city, to the Urban League Movement, and to me, personally.

While John’s service to the Urban League goes back more than half a century, his association with the leaders of the movement goes back even further. While he was studying for his Master of Social Work degree at Atlanta University (now Clark Atlanta), he became a protégé of Whitney M. Young, then Dean of the School of Social Work. Just a few short years later, Young would take the helm of the National Urban League and ask John to lead the affiliate in Flint, Michigan.

He was the obvious choice to lead the Los Angeles Urban League in 1969, at the height of the Black Power movement. He called himself a “sane militant” and was unmatched in his ability to channel the city’s passion and fury into positive change. He could negotiate as skillfully with street gang members as with mayors and Congress members.

His life was an emblem of the African American journey itself. He was born into the segregated South in 1937 and spent his summers picking cotton. While he spoke often of the indignities of Jim Crow, his feelings may best be represented by what happened when White construction workers building a dormitory at North Carolina Agricultural & Technical State University set up separate “white” and “colored” outhouses. John – a founder of the student chapter of the NAACP – and his friends burned them down.

The list of honors and awards John Mack earned during his many years of service is long and includes the very first National Urban League Whitney M. Young, Jr. Award for Leadership in Race Relations, and League’s “Legend of the Century” Award in 2000. In 2005, the Los Angeles Unified School District recognized his commitment to equal opportunity in education by christening the “John W. Mack Elementary School.”

The Whitney M. Young, Jr., Award – which John and the Los Angeles affiliate won in 1993, carried with it a $10,000 grant, which the affiliate used to support sensitivity training among African-American and Latino student leaders in middle school, and to support the African-American-Jewish Leadership Connection. At the time, the group was fighting California’s Proposition 209, and anti-affirmative action initiative. Though the ballot initiative passed statewide, it was rejected by a majority of voters in Los Angeles County, where John and the Connection were active.

We had planned to honor John during the 2018 Conference next month in Columbus, Ohio, and now will pay tribute to his memory. A scholarship fund has been established in his honor through the California Community Foundation – for more information, click here.

John wasn’t just an affiliate President and CEO; he was a leader among leaders, helming the Association of Executives. He was a member of the Academy of Fellows, a group of affiliate leaders with 15 years or more of experience, who served as mentors to new affiliate CEOs. And he served as Vice Chair of the National Urban League Board of Trustees.

By the time I was appointed President and CEO of the National Urban League in 2003, John was a longtime veteran. His mentorship over the years has been invaluable, and I knew I could rely on his steady guidance. It is a loss deeply felt throughout our movement and we join his children and grandchildren in mourning him.

Wendy’s Window: From An Obama Nation To An Abomination