Small cohorts will gather on campus, serving as preliminary steps to study what might work for schools reopening.

Wednesday, September 2, the Los Angeles City Mayor Eric Garcetti updated the city with news surrounding the coronavirus outbreak. Recent statistical evidence has shown that Los Angeles is bending the curve and seeing a decrease in community transmission.  The mayor expressed his concern for this progress to be derailed due to the upcoming holiday, he cautioned the danger of large gatherings can bring hinderance to the progress toward recovery.

Mayor Garcetti acknowledge the challenging time and space Los Angeles has been in, he explained that solidarity and unity among residents has been the net holding L.A. together.  Garcetti emphasized that COVID-19 is a threat. He referred to the data reflecting the collective effort of social distancing is making an impact. Los Angeles as a county is ranked 19 in all counties in California in cases per 100,000 residents. 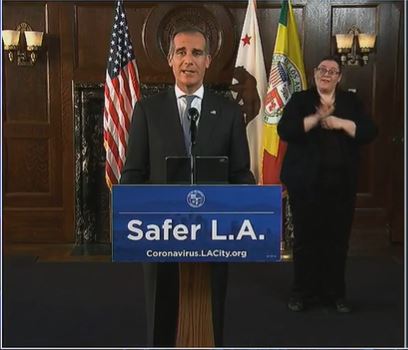 Garcetti stated L.A. sees fewer deaths per 100,000 residents than almost all the pier cities nationally. Within the month of August, Los Angeles reflected 100 fewer deaths than we did in July. The mayor expressed that every life is valuable, and the decrease does not take away from the loss of family members and loved ones, however it does reflect 100 more lives still here.

In the last five weeks alone, Los Angeles has reported more than half of hospitalization numbers have decreased.  The rate of transmission fluctuates; however, it is still reflecting less than 1% of people are contracting the virus from other people. Garcetti explained this decrease is reflective of the collective effort to prevent the spread of COVID-19.

With the numbers reflecting a decrease, the mayor shares his concern in the change of pace in the collective effort as Labor Day approaches. Garcetti stated, “I can’t say this enough times the virus is here and its still dangerous. I think we all learned—whether it’s a holiday coming like Labor Day, celebrations are not in order.”

The Mayor referenced the new state issued guidelines that will work as the compass towards recovery. Garcetti explained the goal for L.A. County is to get to fewer than seven cases per 100,000 people or a testing positivity rate between five and eight percent. That would place L.A. on a tier that is based on which number is higher between the two metrics. Currently Los Angeles sees a 13-case average with a testing positivity rate of about five percent. According to the state navigation, transitions into recovery will be gradual.

The mayor announced schools in L.A. County can offer on campus services for “small stable cohorts” for k-12 students who need the educational support. Starting September 14, the “cohort approach” is to monitor and observe the adjustment to see what works on a smaller scale before reopening schools.  This method is being handled with caution because of the severity of what can go wrong if there was an outbreak among students and faculty.

Los Angeles is showing that it is in better shape, however public officials are promoting caution. There is no room for anyone to let their guard down. It will take a collective effort from the community to get to a place of healing and a restorative economic landscape.