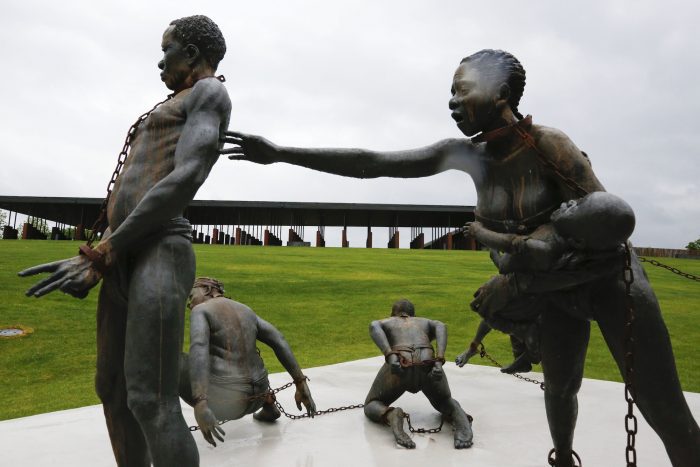 Part of a statue depicting chained people is on display at the National Memorial for Peace and Justice, a new memorial to honor thousands of people killed in racist lynchings, Sunday, April 22, 2018, in Montgomery, Ala. The national memorial aims to teach about America’s past in hope of promoting understanding and healing. It’s scheduled to open on Thursday. (AP Photo/Brynn Anderson)

Over the course of two days, thousands of supporters participated in the grand opening ceremony of the Equal Justice Initiative’s (EJI) unveiling of the National Memorial for Peace and Justice and the Legacy Museum: From Enslavement to Mass Incarceration in Montgomery, AL.

Individuals of all races traveled from different parts of the country, near and far, to attend the two-day truth telling celebration, pay homage to their ancestors, reconcile horrific acts against humanity and properly heal a haunted past to rebuilding a new vision for America.

Toni Battle, a generational victim affected by slavery and first-time visitor, drove from San Francisco for opening day, she told the Associated Press “I’m a descendant of three lynching victims. I wanted to come and honor them and those in my family that couldn’t be here.” 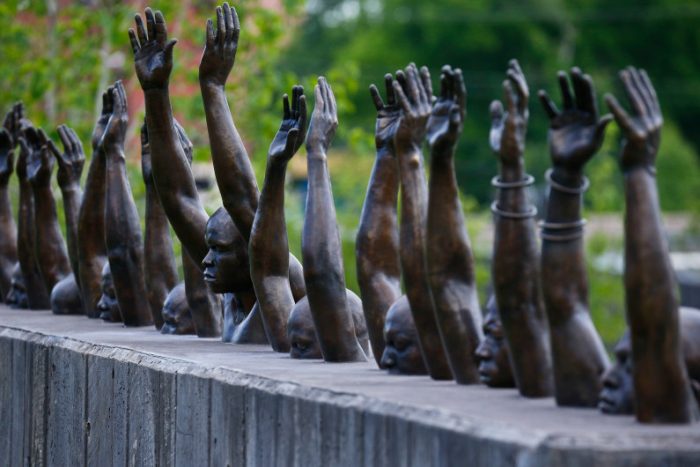 This photo shows a bronze statue called “Raise Up”, part of the display at the National Memorial for Peace and Justice, a new memorial to honor thousands of people killed in lynchings, Monday, April 23, 2018, in Montgomery, Ala. The memorial and an accompanying museum that open this week in Montgomery are a project of the nonprofit Equal Justice Initiative, a legal advocacy group in Montgomery. (AP Photo/Brynn Anderson)

Tears continued to drip throughout the days as thought-leaders and visitors witnessed an interactive experience that includes mapped lynching locations, incidents of over 4,400 men, women and children that were hung, burned alive, shot, drowned, and beaten to death by White mobs between 1877 and 1950, as well as in-depth profiles of the stories behind these acts of violence.

No hashtag in the world can trend this deep, nor no emoji stand trial to express the depth of the somber mood of this unapologetic installation. The thousands of terror cases recognized in the Memorial’s installation bears the names of guilty counties and 800 steel monuments spread out across six acres of sacred land dedicated for the first time in U.S. history as an honest space to reflect, connect and confront racial acts of terror committed in America. 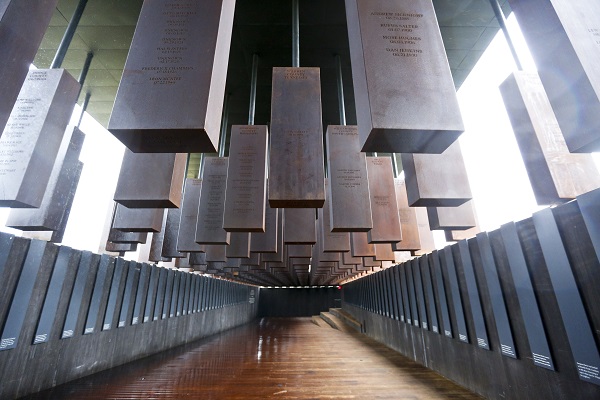 National Memorial for Peace and Justice, the new memorial is opening to honor thousands of people killed in racist lynchings on Sunday, April 22, 2018, in Montgomery, Ala. The Memorial and Justice and the Legacy Museum will open on Thursday. (AP Photo/Brynn Anderson)

To make this day a reality, EJI raised more than $20 million from private donations. Bryan Stevenson, a lawyer and founder of EJI believes that we cannot truly move forward as a nation until we confront this dark chapter from our past. Stevenson reminded an emotionally stirred crowd, “You can’t build a memorial without workers, without women and men who go to a place and put shovels in the soil, put hammers on screws and do the difficult work—Tonight I want to thank the builders who helped us make the institution.  We want to thank you for your labor. We cannot do justice without labor.”

Also, with the help from Google, this undeniable part of American and world history, lynching in America can be experienced online as an extended means to educate the public. “What’s important about EJI‘s Lynching in America project is that they are giving everyone access to untold stories of our racial history and helping people develop a deeper understanding for how we have gotten to where we are in this country,” said Justin Steele, Principal, Google.org.

Paying homage to the millions of Black slaves slain, economically exploited and countless undocumented names we will never know, EJI’s Memorial and Museum rests in a state (Alabama) whose population was comprised of nearly 45 percent African slaves in the 1860’s. United in the gap of relentless courage and impeccable creativity these two institutionalized landmarks exemplify dual acts of massive liberation once lodged in a suffocating harness of American soil that has now been set free.

Included in the opening of the Legacy Museum and Memorial were events to help lead the fight for justice at the Peace and Justice Summit. The summit featured leading conversations with individuals who have dedicated their lives to advancing social justice. Some of which are: Sherrilyn Ifill; Congressman John Lewis; Rev. Jesse Jackson, author and Director Counsel of the NAACP Legal Defense Fund; Michelle Alexander, the courageous author of The New Jim Crow; Jelani Cobb, award-winning writer for the New Yorker and professor of journalism at Columbia University; Chrystal Rucker, chart-topping gospel recording artist; the legendary Marian Wright Edelman and Gloria Steinem; award-winning director of Selma, Ava Duvernay; Elizabeth Alexander, poet and playwright and Anna Deavere Smith, founding director of the Institute on the Arts and Civic Dialogue to name a few. 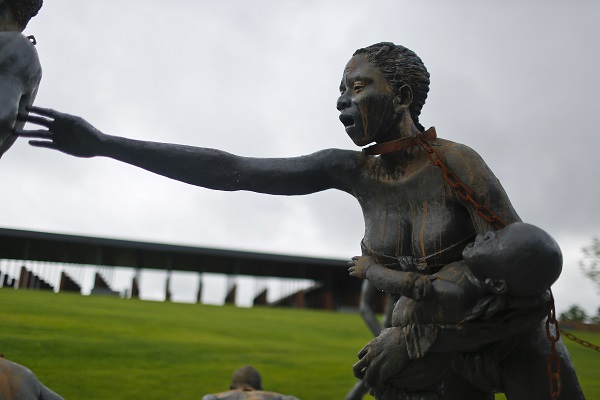 The National Memorial for Peace and Justice is seen, it’s a new memorial that is opening to honor thousands of people killed in racist lynchings on Monday, April 23, 2018, in Montgomery, Ala. The Memorial and Justice and the Legacy Museum will open on Thursday. (AP Photo/Brynn Anderson)

In closing, the Peace and Justice Concert uplifted an audience open to being ambassadors for healing racially motivated wounds. Artists like The Roots, Common ft. Tasha Cobbs, Dave Matthews, Usher, Robert Glasper, Brittany Howard, Valerie June and Kirk Franklin amplified the movement through their music as the iconic Stevie Wonder parlayed his smile to impart this message before rocking with the crowd, “I come to you tonight to say to all of you in America and throughout the world and to all of you specifically in the South—I dare you, I challenge you to have a year of atonement. I dare you artists and leaders of this world and nation including you Mr. President— I dare you to see with the eyes that you may see as clearly as my eyes are blind to move forward for real not for fake. Love. My hope in that we will come together as a united people, not only in this country but as a people come together in this world before it is too late.”

Just as Africa has its Door of No Return on Gorée Island, America now has the Legacy Museum and Memorial to address the systemic trauma and acts of racial terror to educate Americans and the world about the deep-rooted impact of Lynching in America.

Moving forward to eradicate modern day lynching and racially targeted policies, ask yourself and others, “What is your vision for a new America?”

Plan your trip and learn more about the curators, artists and resources at the Legacy Museum and Memorial, Visit: www.eji.org and museumandmemorial.eji.org 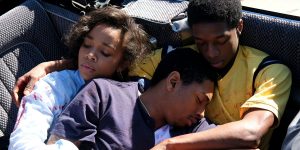