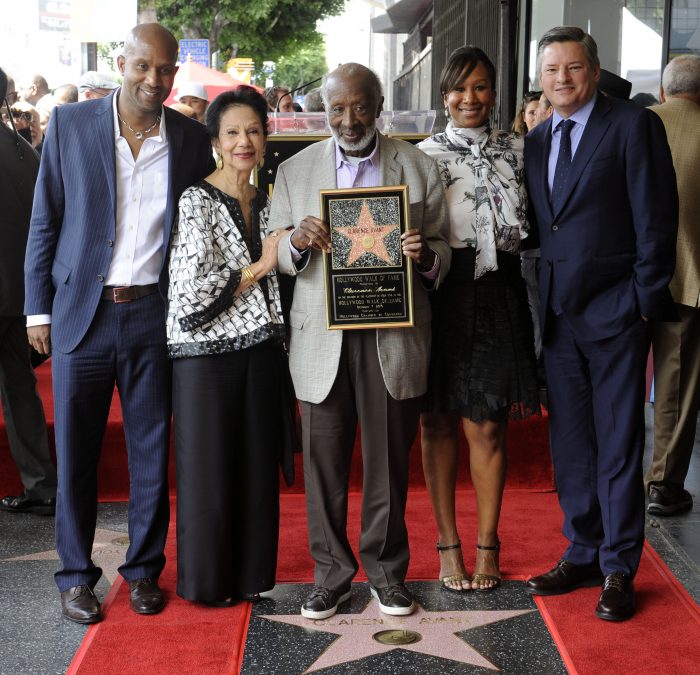 MUSIC MOGUL CLARENCE AVANT WAS HONORED ON THE HOLLYWOOD WALK OF FAME ON FRIDAY OCTOBER 7, 2016.
PHOTOS BY VALERIE GOODLOE

October 7, 2016 is a day that many music enthusiasts won’t soon forget as the city of Los Angeles has deemed it “Clarence Avant Day”. During his recent Hollywood Walk Of Fame induction ceremony, Avant was celebrated for the sixty years of trailblazing work he’s done behind the scenes as a music executive.

It was noted that Avant’s ceremony may have had the most celebrities that were also walk of fame honorees in attendance including: NBA legend Magic Johnson, legendary producers Berry Gordy, Quincy Jones, LA Reid, Jimmy Jam & Terry Lewis, Babyface, as well as singer and actor Jamie Foxx, who were all eager to pay homage to Avant for his tutelage throughout their careers.

Renown as the “Godfather of Black Music” Avant, 85, began his career as a music manager in the 50s for the likes of R&B singer Little Willie John, jazz singer Sarah Vaughan, as well as rock and roll pioneer Tom Wilson. In the 60s, his knack for spotting talent led to the founding of Venture Records Inc. backed by MGM Records, the label would become the first joint venture between an African American-owned music company and a major record label. 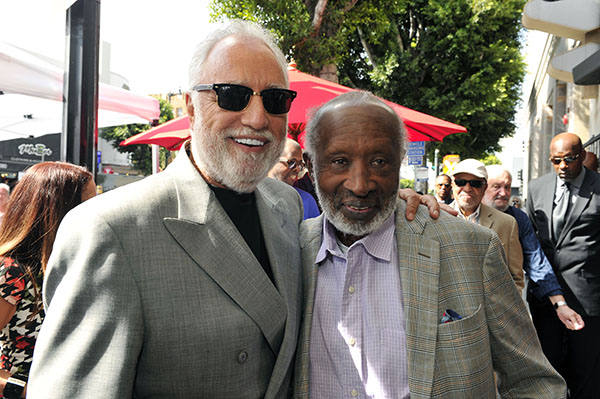 CLARENCE AVANT AND DANNY BAKEWELL SR. AT THE HOLLYWOOD WALK OF FAME ON FRIDAY OCTOBER 7, 2016.
PHOTOS BY VALERIE GOODLOE

It was during this time that Avant first met producer Quincy Jones. “I had to [write my speech] because I know too much about him and I didn’t want to bust him,” began Jones’ humorous remarks to Avant. “I’ve had the pleasure of speaking at many of these walks over the years but I can say without hesitation or reservation that today’s ceremony brings a profound sense of joy to my heart because we’re recognizing the contributions of my oldest, closest, friend in the world, my brother Clarence Avant.” Jones went on to share how he was in awe of Avant’s ability to negotiate and broker six figure business deals which were oftentimes unprecedented amounts for many artists and executives of their day. “We’ve been brothers and friends ever since then.”

With an astounding fifty-year friendship, Jones told the captive audience, “[Clarence] has always been the silent architect. He just gets things done and he’s not beating his chest bragging about it or looking for credit, he just gets it done and that’s what I’ve loved about him for all of these years. Clarence, there will never be enough words to express how much you mean to me, you’ve always told me the damn truth in every aspect of my life. I’m sincerely honored and humbled to share this beautiful day with you” added Jones. 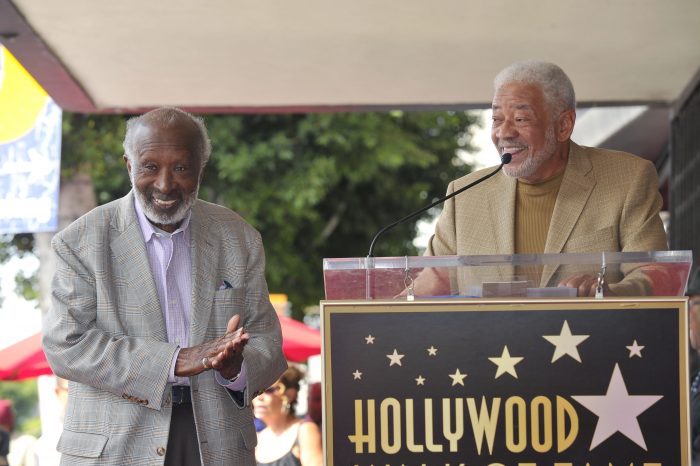 Echoing similar sentiments of gratitude for Avant was Grammy Award-winning artist Bill Withers, who during the Walk Of Fame Ceremony, thanked the executive for being one of the first people to believe in his talents. “Not far from here was Sussex Records, where I had my first meeting with Clarence and signed my first recording contract. With his energy and very colorful language, Clarence seemed to know people of all manner and mannerisms. We called him the guru which evolved into godfather.” Under Avant’s imprint, Withers released his best-known hits, “Ain’t No Sunshine”, “Lean On Me” and “Grandma’s Hands”.

In the 70s, Avant made an indelible mark on the radio industry when Avant Garde Broadcasting, Inc., became the first African-American owned FM radio station in metropolitan Los Angeles.

In the 1980s, Avant’s mentorship of producers Jimmy Jam and Terry Lewis resulted in the duo launching the careers of Cherelle, Alexander O’Neal and the S.O.S Band. Thus, it was befitting that Avant’s Walk Of Fame star was placed next to his “sons”. “There would be no Jimmy Jam and Terry Lewis without Clarence Avant. His star going next to ours couldn’t be [in] a better place. Welcome to the neighborhood,” said Jam during the ceremony. “To the brightest star among the stars…welcome, Pops,” added Lewis.

Many of the executives in attendance mentioned that one of the most invaluable lessons that Avant taught them was the importance of knowing their worth. 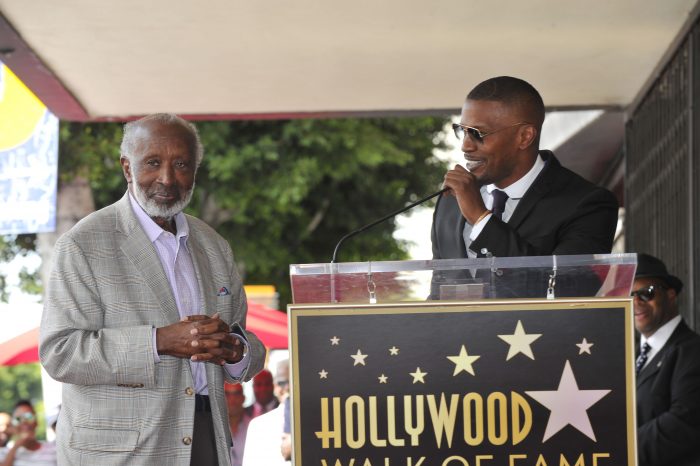 Producer and record executive LA Reid also credits Avant with helping he and Babyface launch their company, LaFace Records. “Clarence has been a great inspiration throughout my career. He’s always given me great advice, most notably, ‘get paid’. Clarence always said, “Get the check. Number one, it’s about the money, number two, it’s about the money and number three it’s about the money. If it wasn’t for Clarence, myself and Kenny [Babyface Edmonds] wouldn’t have been so well connected in Los Angeles.” Reid also added, “I’m really proud, this couldn’t have happened to a more deserving person. This is probably the most heartfelt ceremony that I’ve ever attended.”

Moving into the new millennium, Avant’s business savvy also had a lasting impression on music manager Chaka Zulu whose clientele includes Grammy-Award winning rappers T.I. and Ludacris. “I could have been anywhere but I had to be here,” said Zulu. “[Avant’s] done so many things in this business that have allowed me to flourish and be a part of this industry. You have to pay homage to a man that paved the way.” In an era where many managers and producers crave the spotlight, Zulu shared the importance of Avant’s seclusive yet omnipotent nature. “It’s an understatement to say what the importance of the people behind the scenes are. They’re the ones who wake up before the artists, go to sleep after the artists, they’re the ones who look over the contracts; they’re always on watch so that the artist is able to be creative and focused on what they do. It’s a tireless, selfless job to do what Clarence has done for this long and at the level. I salute him and thank him.”

During the ceremony, Grammy and Oscar Award-winning artist Jamie Foxx described the humbling experience of first meeting Avant with his no-nonsense demeanor. “It was like meeting the principal. But I got a chance to meet an absolute legend who embraced me like a family member. The footprints you’ve left in the sand will never be washed away. We love you.” 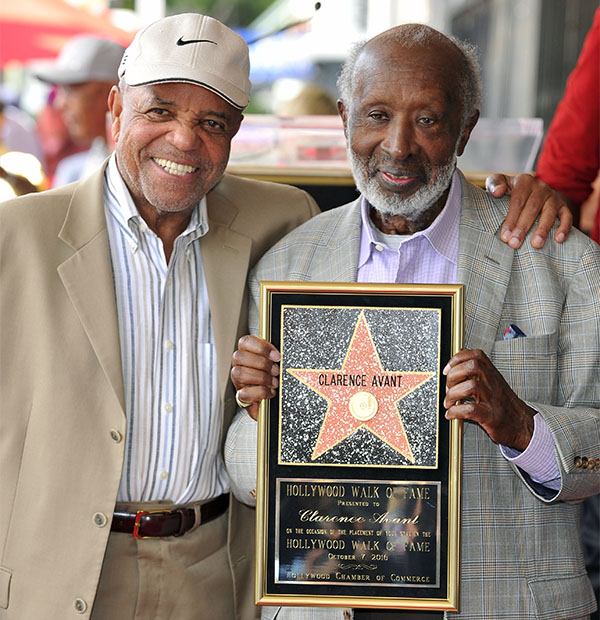 Avant’s influence transcends his work in the music industry; he’s also been a consistent figure in the realm of philanthropy, community empowerment and politics. Over the years, Avant has generously given to various civic organizations including the: NAACP Legal Defense Fund, Apollo Theatre Foundation, Los Angeles World Affairs Council, Inner City Broadcasting Corporation and served as chairman of the board for the Brotherhood Crusade foundation.

“This honor has been long overdue,” said Danny J. Bakewell, Sr., Executive Publisher of the Los Angeles Sentinel Newspaper and the L.A. Watts Times Newspaper and close friend of Avant. “Clarence has been a phenomenal force in the music industry for over 50 years. I am honored to call him my friend and be here to celebrate this momentous occasion with his wife Jacquie and his children Nicole and Alex.”

As the husband and father of two children, Avant’s son Alex shared that his father’s benevolence is what has been instilled within him. “The most important word that he’s shared with me is “responsibility”. Being responsible particularly for people of color is very important. One of the advantages of being behind the scenes is that he can motivate, collaborate and inspire more people. When you think of the legacy of Clarence Avant, think of his contribution not only as a music executive but also as a friend. He’s a real friend to everyone; his dying loyalty is admirable. He follows through on everything he says particularly with a career spanning close to sixty years is rare these days.” 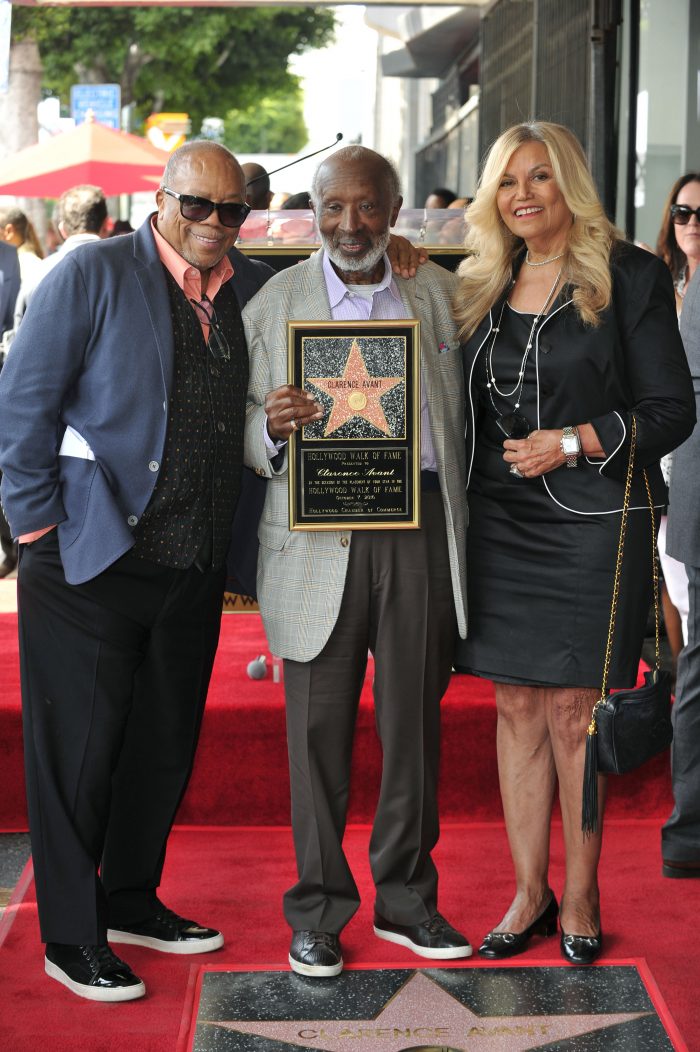 Avant’s influence in the political sphere dates back to the 70s when he helped to raise nearly a million dollars for Jesse Jackson’s Operation Push Expo. He donated nearly $30 thousand to the campaign for L.A.’s first African American mayor, Tom Bradley. In the 90s, Avant’s home was the site of a prestigious fundraiser for President Bill Clinton and in 2007 he supported campaign efforts for President Obama.

Acknowledging the anomaly of Avant’s prolific career, director and producer Reginald Hudlin shared, “The legacy of Clarence Avant is a man who understood politics, culture and business and could weave all three seamlessly–that’s an extraordinary achievement. He raised a generation of executives both black and white. He shaped music, he shaped politics, his philanthropy is incredible–he’s a legend. It’s terrifying to think of a world without him. I’m so happy to be here to celebrate his incredible life achievements.”

Even on his day, Avant shunned away from the spotlight, jokingly placing the Walk Of Fame plaque in front of his face as not to be captured by photographers. Always in business mode, Avant kept his remarks short and sweet because, “they’re not paying me so there is no speech.”

With titles ranging from activist, executive, TV, film and music producer, publisher, philanthropists and more when asked if there was any title in particular that he wanted to be known for, Avant said, “Just remember my name, the rest you’ll figure out.”

With so many people attributing their personal and professional successes to Clarence Avant, neither his name nor his legacy is something the world won’t soon forget. 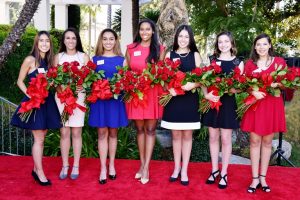 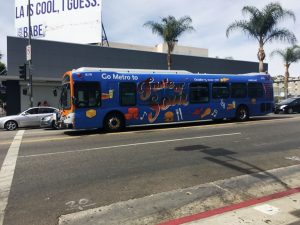