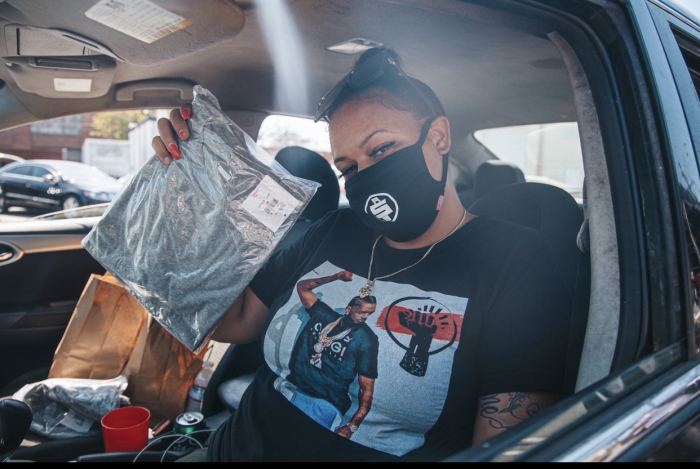 The Dreamers Youth Foundation partnered with The Marathon Clothing and Puma to host their Feed the Kids Grab and Go event. Dreamers Youth gave away clothes, provided healthy food for the community, skin-care products for the men, and helped people register to vote. Black-owned food companies were involved in demonstrating that they are circulating the Black dollars in their communities. Community members who showed up with their kids were taking pictures and could not be more thankful. 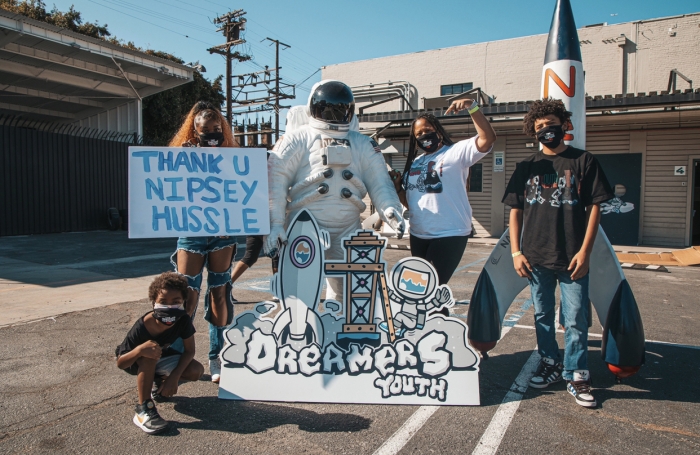 The family expressed their gratitude for the late Nipsey Hussle. (Courtesy photo)

Co-founders, Osh, and Samantha Smith, who also run the organization, started The Dreamers Foundation in 2015 as a small workshop. Throughout the years, they transitioned their workshop over to Vector 90, a collaborative workspace created by David Gross and the late Nipsey Hussle. Co-founder Smith said it is essential to know the power Black people have. She stated, “We need to know that we have power as Black people, and this is the year we take our power back. We have to use our voices.” Smith states it is ok to go out and march, but wants people to vote and make real changes in the community to see results. 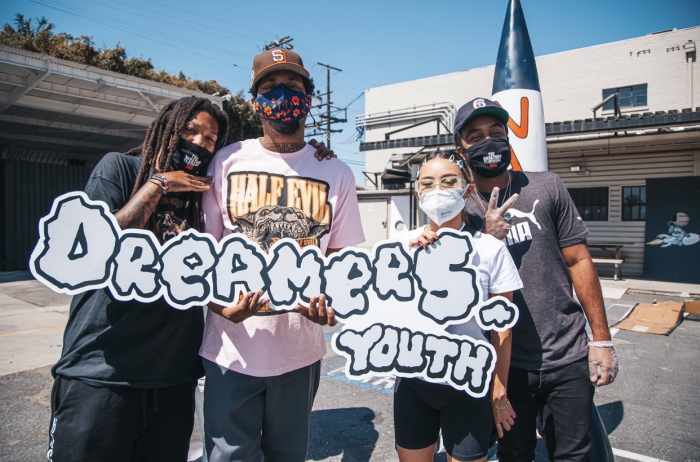 The pandemic inspired this event, and they have received support from artists such as Dom Kennedy and Buddy, who came out to help in part one of the Feed the Kids Grab and Go event. Osh said, “It was like a switch-up. We had so much planned this year. I think this was a good event. We got a gage of what the city needs. Had to let them know, we know y’all need stuff. We have some cool stuff coming up with Vector. We have to figure out a way to get the kids up here during school, COVID-friendly.” 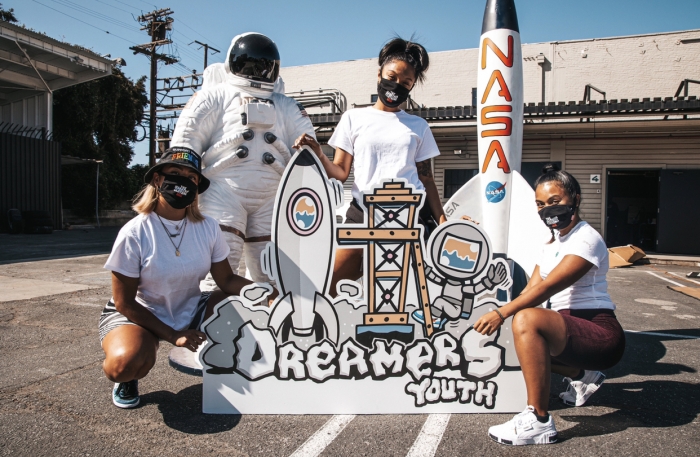 The Dreamers Foundation understands that everybody doesn’t have wifi or comfortable environments to do their work. Osh mentioned she would not want to go to school online right now, which is one of her motivations to keep helping kids. “A place that’s COVID friendly so we can feed the kids still. That’s something we are working on right now. I’m grateful.” 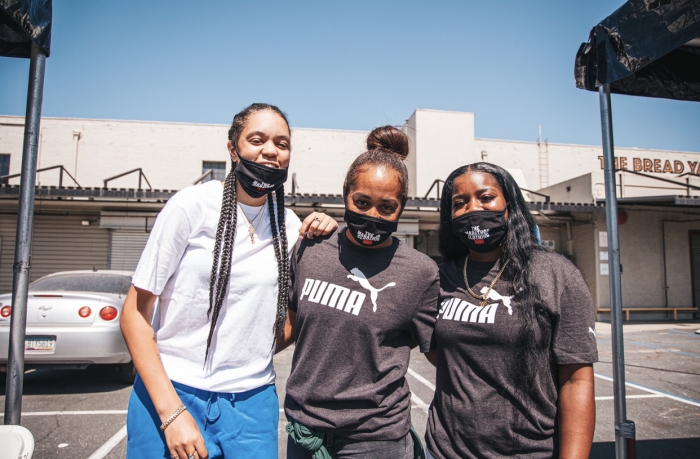 Ann and other volunteers worked hard to help make the event a success. (Courtesy photo)

“The organization is pretty much-providing resources to kids they normally wouldn’t have, and we want to let them know that there are creative jobs you can do, Co-Founder Osh said. That’s how I got started as a DJ. I was at this after school program up the street. That was something I had the resource to. I was able to practice my creativity.” Osh was motivated to offer the same opportunities that she had to young people coming up behind her.

“Everybody involved in the event was enjoying themselves, giving back and helping everyone they grew up around,” Smith expresses. Volunteers worked hard and voiced their opinions on giving back. One contributor said, “It is very important to keep our people’s name alive. No matter what you do or what your background is, we all have something to contribute to everything that’s going on in the community.” Another volunteer stated, “We just out here giving back right now to the youth, spreading positive energy as much as we can.” Everyone mentioned how they were representing Nipsey, and he would be amazed to see them out there, keeping the ‘The Marathon’ strong.

Community members expressed their appreciation for Nipsey with their ‘Thank you Nipsey’ signs, wearing apparel from The Marathon clothing. One community got out her vehicle with her son and yelled, “Nipsey, thank you for helping the community and looking out for all the kids. Without you, we don’t know where we would be. Rest in Heaven. We love you, Nip.” 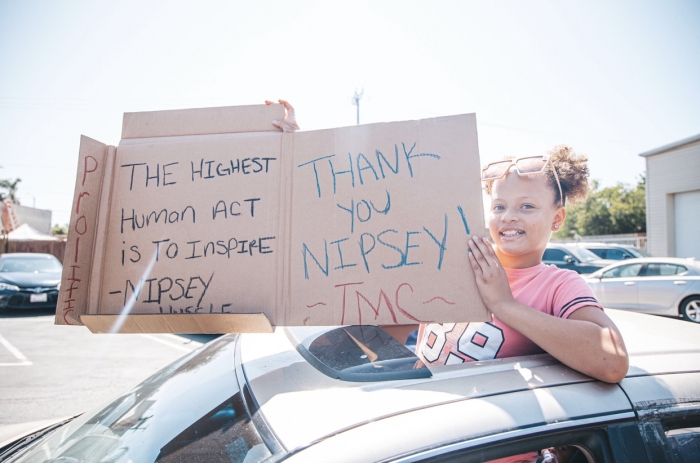 “The highest human act is to inspire.” (Courtesy photo)

Smith inferred that her brother, the late Nipsey Hussle, would be incredibly proud of them as they continue to push everything he stood for. “He’s 100% proud for sure. We are just carrying on what everybody was doing. We can’t stop; we got to keep going. Everybody got to go sometime. Right now, we want to make sure that what we do is in alignment with what he would want and what his vision was, and already doing.”

Osh announced that The Dreamers Youth Foundation is planning more events with Vector 90 soon for kids. 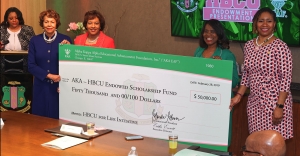 Alpha Kappa Alpha Sorority, Inc. Does It Again and Raises $1 Million in Sup... 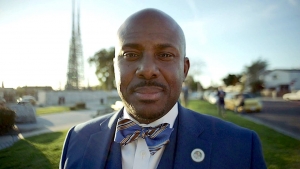 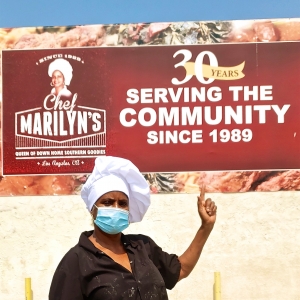