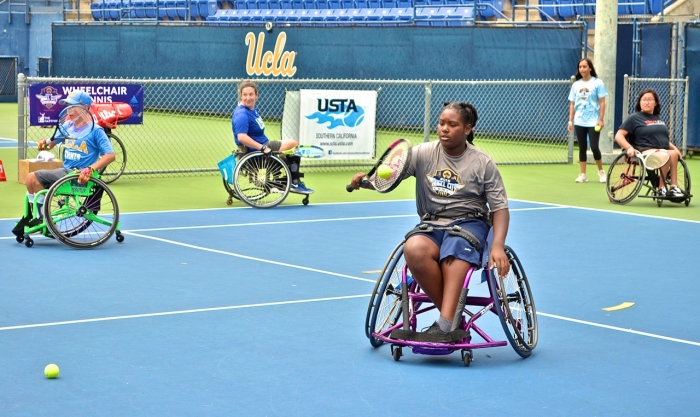 Arelle Middleton at the tennis clinic during the Angel City Games presented by the Hartford (Amanda Scurlock/L.A. Sentinel)

The event now holds clinics and competitions for seven sports. Sitting volleyball and table tennis were added this year. Along with the new sports come the traditional events, like the Parade of Athletes and the Celebrity Wheelchair Basketball Game.

Angel City Sports was created in 2015 when Clayton Frech and his son Ezra wanted to establish an adaptive sports festival in the Los Angeles area.

“It’s really gratifying to create something like that for the adaptive community where they’re really honored and celebrated,” Clayton said.

The event has attracted Paralympians who mentor the athletes, helping them learn and enhance their athletic skills. This year over 400 athletes and more than 20 Paralympians and Olympians attended the festival. 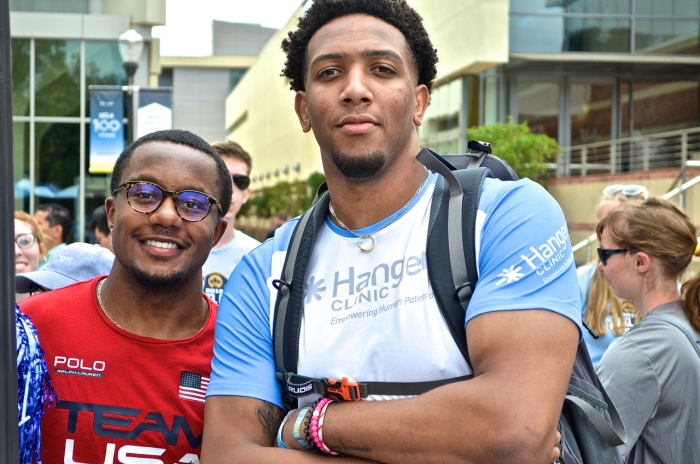 Among the Paralympians was Desmond Jackson, who qualified for the 2016 Summer Paralympics in Rio at the age 16. He became the youngest athlete to qualify for the Paralympics, competing in 100m, 200m and the long jump.

“I’ve known Ezra since he was five or six,” Jackson said. “As Angel City grew, that’s how we found out about it and it’s growing every year, I just want to be a part of it and see it keep growing.”

The protocol for each sport offered is there is a clinic where the athletes can learn the sport and the athletes then compete against each other. The Games also offers track and field, swimming, tennis, wheelchair basketball, and archery.

The Hanger Clinic was one of the many sponsors at the Games. They flew out Hasaan Hawthorne, who works for the company, to attend the Games. Hawthorne helped Pelham High school of Alabama wrestling team to a 39-0 overall record and win the 6A state championship as a senior. He now wrestles collegiately at Hastings College in Nebraska.

“Going undefeated and winning state was huge, you put a lot of stuff into it and it’s just a relief and prove everybody wrong,” Hawthorne said. “To do it against able bodied kids when you’re the one who’s disabled, it’s kinda cool.”

Arelle Middleton has been attending the Games for four years and plays wheelchair tennis. She enjoys “meeting new people and making friends” through the years.

“It’s fun to do,” Middleton said. “You don’t have to worry about other people judging you because everyone has a disability.” 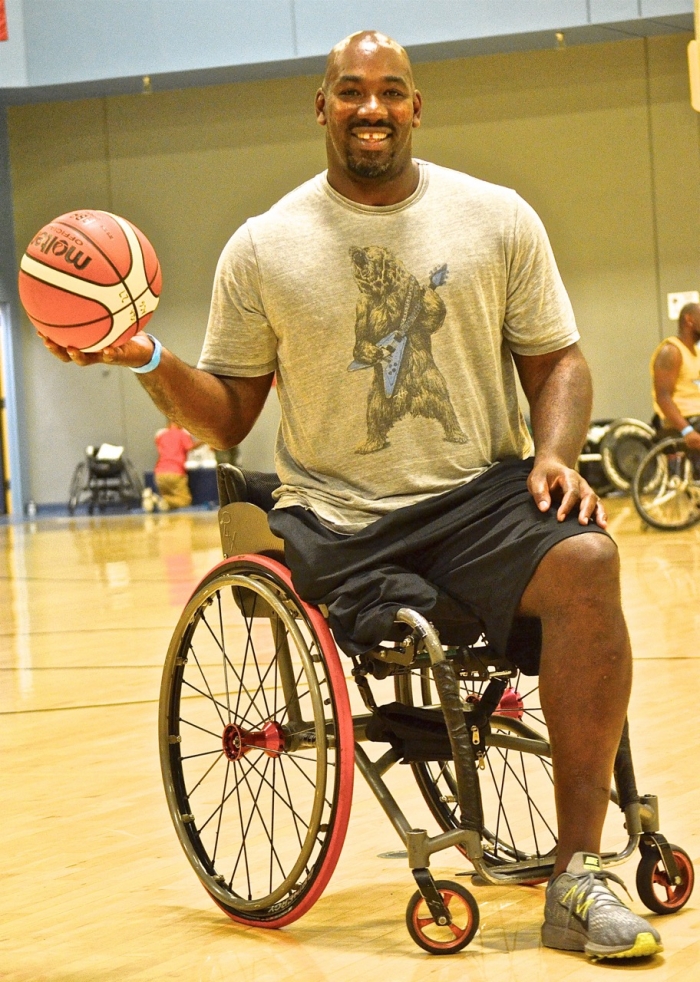 “It motivates us to do better and want to build up the sport even more,” Pone said about the Games. “I think everybody should at least try wheelchair basketball at least once.”

Gerald Butron’s team did not qualify for the wheelchair basketball competition, but he still enjoyed the weekend. He mentioned how he was eager to play sitting volleyball. Burton lost his legs in an accident in 2001, but did not start playing wheelchair basketball until 2010 when he was introduced to it at Rancho Los Amigos Rehabilitation Center.

“I played with my [prosthetic] legs on,” Burton said. “One day, they told me ‘You should take your legs off and play.’ I took my legs off and it was a world of difference, I can move, I’m all abled and it’s lots of fun.”